Terrible revenge of the Skripals cat 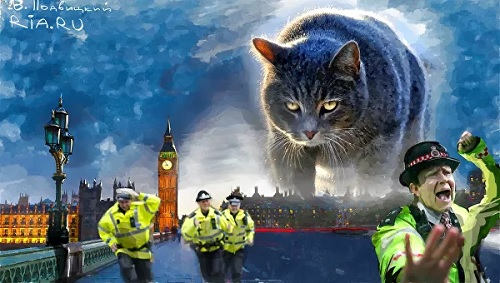 Investigatio ns in Vienna by four Austrian ministries, the BVT intelligence agency and the Austrian prosecutor's office have shown that secret OPCW reports on the blood tests of Sergei and Yulia Skripal, copies of which were passed on to the Austrian government, did not identify any Novichok.

"Austria officially confirmed this week that the British Government's allegation that Novichok, a Russian chemical warfare agent, was used in England by GRU, the Russian military intelligence service, in March 2018, was a British invention.
Investigations in Vienna by four Austrian government ministries, the BVT intelligence agency, and by Austrian prosecutors have revealed that secret OPCW reports on the blood testing of Sergei and Yulia Skripal, copies of which were transferred to the Austrian government, did not reveal a Russian- made nerve agent. "

On this occasion, many people in Russia have many questions, including why the sanctions were imposed on Russia, who will be responsible for the demarche with the expulsion of diplomats, where did the Skripals go?

Here are some awkward questions:

2. Why was the title Novichok advertised on a British TV series a couple of months before the poisoning?

3. Why did they smear the outside door handle with the Novice in the rain, if they knew that the Novichok disintegrates from the water?

4. Why did the British special services destroy every piece of evidence, sparing no benches, no ambulances, no houses, not even the Skripal cat?

5. Even if we assume that Petrov and Boshirov smeared the door handle with a Novichok during the day, and the Skripals managed by some miracle to sneak past all the cameras into the house and touch the handle, and then again imperceptibly leave the city and return again, then one remains an indisputable fact that the Skripals cheerfully lit up in Salisbury for several more hours, visiting a pub and a restaurant?

6. If the Novichok in the form of a gel degraded, while hanging on the door handle for an hour, from the damp weather, then the Skripals would have gotten off unwell. But! In any such case, the symptoms of defeat should have appeared very quickly after contact with the Combat Poisonous Agent, within a few minutes. Why was this not observed?

7. If the Skripals were poisoned during the day, how did it happen that father and daughter lost consciousness many hours later? Different degrees of intoxication, different metabolism, weight. And after many, many hours it acts simultaneously? This simply cannot be, even theoretically.

8. Why did this all happen in a town in the immediate vicinity of the chemical weapons laboratories? Coincidence?

9. Why was another sending substance, albeit of the second category, Bz, found in the samples of Yulia Skripal in the Swiss laboratory?


10. Why was the same Bz found in the form of its decay products, but "Novichok" was found in Yulia Skripal's samples in pure form, which could hardly have been a month after the poisoning.

11. Why did the Novichok's footprints end up in the hotel for 4 long months, but no one was poisoned by them, and the hotel itself was not demolished completely, as they wanted to demolish the Skripals' house?

12. Why did the Novichok substance, which decomposes from water after several months of wet cleaning in a hotel, not completely decomposed? Freshly added?

posted on Aug, 4 2020 @ 05:06 AM
link
13. Why did the drug addict, who was actually inhaling the chemical warfare agent, not die on the spot, but was in intensive care for a long week?

14. Why, by the way, was there a chemical weapons specialist in the Salisbury hospital where the Skripals were placed? They say it's a coincidence.

15. Why was the perfume bottle with "Newbie" found by drug addicts in Amesbury sealed? And how did the Novichok bottle end up in Amesbury, if Petrov and Boshirov walked only in Salisbury and London?

17. Why, in the end, are the Skripals hidden, not allowing a free press conference, even under the control of the British?

Any lie is revealed sooner or later. People will be able to forgive her. Will the Skripals cat forgive Britain?

posted on Aug, 4 2020 @ 07:01 AM
link
The World knows that The Russian Federation
has many elements that purely and simply
resemble Mafia operations.

It is a result of decades of Soviet control
that resulted in the populace relying on
the black market for survival.

After 60 + years or so, it has become inherent
in your society. Bribery at every level.
This will take a concerted effort of decades
to root out.
Many youth think it is impossible,
so they have left Russia,Ukraine,and
the old block.

And yet, do not countries of The World
suffer this to a more or lesser degree?

Corruption throughout human history
has been the downfall of civil empires.

It is alarming that none think it will happen
until it does.

Then it happens fast,,,as in now.

About corruption. There is one country in which corruption is legalized and called lobbyism. You know this country.
Analysts and publicists in Russia are amazed at how quickly the once legendary special services and analytical centers of the West have degraded.
The Skripal Cat will confirm from his feline paradise ... highly likely

Good you do not deny it.
It was not meant as an insult,
but rather an observation.
As I said, "Do not the countries of
The World suffer to this more or less'?".

We all suffer from this.
It is a scourge on humanity.

A Votre Sante'
edit on 4-8-2020 by Wildmanimal because: add content

They may become legends, but they will be computer mining programs for large databases, not people. Some consider it a strength, we - a weak. The future will show who is right.

We both know the risks of the
non human "A.I.' cloud,etc.

It is not a matter of strength
or weakness.

It is a matter of vulnerability.
It is a fight for the soul.

Brother Manimal, I hope you're right about that. Time is running short.

I have no information about the current state of these programs (I haven't dealt with this problem for a long time). But I remember how it started - with an Israeli large-scale database mining program released in the late 90s, presumably by Verisign. She became the progenitor of all subsequent programs and applications for them.
Even then, the program suffered from basic flaws. If there was not enough objective data for analysis, the program automatically "pulled" non-existent data and built it into the outputted circuit. That is, she fantasized and herself believed in these fantasies.
Whether these basic shortcomings have been corrected now, I don’t know.

It has been fine tuned as a
target recon system.
But not corrected.

Again, we are all vulnerable
if it is in a dangerous possession.
Differences aside, oddly enough,
some things need to be destroyed
for mutual existence.

There are similar programs in Russia too. In Syria, in 2015-16, systems were tested for conducting Network-centric warfare, ESU TZ and Andromeda-D. Now they have been significantly improved and modernized. The difference is that in Russia the concept of analysis does not allow programs to draw conclusions and engage in strategic forecasting. In the American and British intelligence services, both analysis and forecasting are given to computer programs.
The last stronghold of mining and forecasting was George Friedman's private intelligence and analytical company (shadow CIA) Stratfor. But now it is degraded, having given the functions of analysis and forecasting to machines.

I agree with you, my friend)))

Inside of every Red Red,
there is an American
trying to get out.

posted on Aug, 4 2020 @ 09:43 AM
link
Also they interacted with kids at a pond while feeding ducks bread, The kids were fine so were the ducks after eating bread covered in poison.

posted on Aug, 4 2020 @ 05:00 PM
link
The OPs link goes nowhere. An actual link to the official Austrian confirmation would help the case for this not being a hoax.

Many of the “awkward questions” in the OP are just a rehash of misinformation and distraction promulgated by the controlled Russian media and authorities in the aftermath of attempted murder of Sergei Skripal and his daughter Yulia by Russian agents. These “awkward questions” were debunked long ago, or are just wrong.