Portland Police Save Live Pig From Beheading By BLM-ANTIFA Rioters


originally posted by: Phage
a reply to: projectvxn

The story in the OP is a hoax.


Pelster did not respond to an email on Monday seeking additional information about his claim regarding the pig’s fate.

"It’s a happy story during a sad time, with protesters, cops, a mom and me uniting to help an innocent pig to safety and sanctuary,'' McDonald-Lewis said. 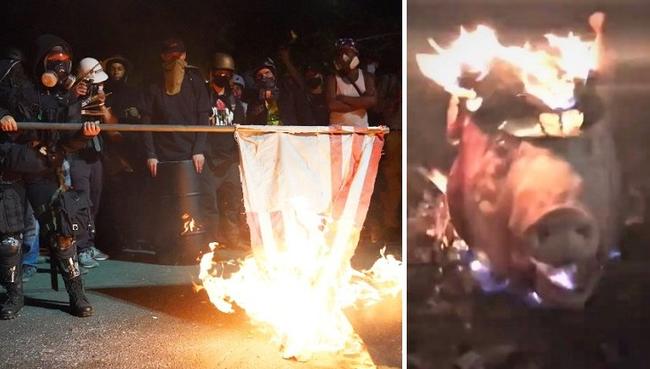 The pig in this picture appears to have fire inside it's mouth, while wearing a burning hat.

That would be a police officer's hat.

It's a pig's head.
You can buy one yourself if you want.
www.chowhound.com...

originally posted by: IAMTAT
So, now BLM/ANTIFA are sacrificing live animals to protest George Floyd's death.
Last Friday night, protestors set fire to the severed head of a pig...along with Bibles and the American flag.

This pig,"Betty"...as the now rescued pig is affectionately being called by the animal right's activist and police who rescued her...was due to be another BLM/ANTIFA animal sacrifice to their gods of anarchy and chaos in another Marxist/Fascist "peaceful protest".

Police officers in Portland, Oregon rescued a live pig that was due to be publicly slaughtered by far-left rioters as part of an anti-police protest.

“Someone had brought the pig there to ‘sacrifice it to end all police brutality,'” said animal rights activist Mary McDonald-Lewis, who cared for the pig until law enforcement arrived.

McDonald-Lewis specifically told police that the pig would be beheaded, stating that the “animal was going to be slaughtered so its head could be used in the protest”. The word “pig” is often used as a derogatory slang term for police officers by left-wing extremists.

I assume there must be some laws against publicly slaughtering live farm animals on public streets and setting fire to their heads...but, then again, we are talking about Portland.

The real twist is when the police realized the pig was black and shot him.

posted on Aug, 2 2020 @ 09:53 PM
link
Can we drop the gloves already... and "PEACEFULLY OF COURSE" make these sub-human's understand why they poked the wrong bear.

Just goes to show that we are all in a propaganda war and not all of us are keyed in to all of it.

Getting really sick and tired of the fake news. Thanks for the link.

That is an everyday happening for woke cites.

You are out of touch.


I would think police departments would have a maximum weight limit but I've seen some fat ones in my day, 300 pound pig isn't out of the question

I would think police departments would have a maximum weight limit but I've seen some fat ones in my day, 300 pound pig isn't out of the question

You think police are "pigs".
Good to know.

You have the police officer and the PETA woman both quoted as saying this pig was there to be slaughtered as a burning effigy in a riot/protest where slaughtered pigs are being used in just such a manner.

Again, unless 300 lb. pigs usually roam the city streets of Portland during riots/protests...we can assume their statements are based on experience and inside knowledge...and that this pig, which was brought there to be killed as theater, managed to escape it's BLM/ANTIFA captors.

Or...we can just call them both liars and assume the 300 lb. pig just wandered into the downtown riot/protest area from some farm out in the countryside.


You think police are "pigs".
Good to know.

And you seem to think that protestors are radical left BLM antifa animal abusers, so much so that you fell for a sensationalized spin job on a sketchy website and were so moved by it you felt the need to share it on here where your source was refuted by multiple members within a few posts.

originally posted by: Blaine91555
I have no problem with the killing of livestock for food, but in this case it's just cruelty that serves no purpose. ...

Wrong. This serves "a purpose." Call me crazy, but I firmly believe that these people - whether they all know it or not, and I am certain that some of them do - are making blood sacrifices to demons.

Abaddon and Apollyon are the names of the spirit that they serve and that controls them. It's name is destruction.

posted on Aug, 3 2020 @ 12:10 AM
link
Well...on the bright side this means we’re one step closer as a society to accepting those public executions I’ve been saying will never happen.

Yeah I have a feeling the one that thought this up had black magick as half the motivation. Everyone else probably just went along with it for the shock value

posted on Aug, 3 2020 @ 12:20 AM
link
Holy mother of God, although I am not surprised considering who they are associated with.

BLM just made an enigma of PETA....lol

that's funny, I shouldn't laugh though because this whole thing is SICK, I don't care where they got the head it is sick.