USO flies out of the water into the sky and vanishes. SW U.K.

posted on Aug, 2 2020 @ 06:15 PM
link
Do not see many of these on ATS, so it's not a video but a picture of an unidentifed submerged object captured by a witness in far S.W. U.K., which seems to be a hot spot for sightings, as this poster has posted many times to this source.
Witness says he was looking down and saw something moving in the water, and said it was black and moving in his direction.


With that a saucer shaped object flew out of the water right in front of me before it flew up into the sky and disappeared from view. It happened so fast I could hardly believe what had just occurred. I had been looking through the
viewfinder of my Sony HX-300 Camera at the time which had allowed me to capture the whole event in several photographs utilizing burst mode.


He then looked around for anything else odd and to his surprise saw 3 objects hovering by some cliffs.


I then looked around the area for any other anomalous objects and to my surprise I then spotted three objects that were hovering above the cliffs at Brixham. Two of the objects were black while the other one was glowing a bright white. I was just about to take some photographs of them when they all shot off in different
directions causing me to lose sight of them. I had spotted four separate objects in total over this area. It really is incredible. The photographs were taken at 4:18 PM on the 6th of July 2020, at Paignton Goodrington, Devon, England.


Note: This same witness has taken many compelling photos of UFO’s. He obviously lives in a UFO hotspot. I have never had any reason to doubt the authenticity of any of his photos.

Or a bug. Close to the camera.
Cliff is in focus. Bug(s) is not.

Has the webmaster ever published an image he didn't like? Blurry very faint image (like a diaphonous bug wing out of focus and moving fast) vertcally above the 'body' of the 'object' and another similar discolouration below and slightly to the left.

Why would a USO have two 'wings' about the same size relative to it's body as a bug's?

Where is the spray/trail of water one might expect?

My guess is that someone got a bug in their happy snaps and then made up a story.

posted on Aug, 3 2020 @ 03:11 AM
link
Looks like a ladybug close to camera, you can see the black underside and the orange in the sides.
and way off in the distance two persons are parachuting, perhaps what he was trying to take a picture of in the first place. 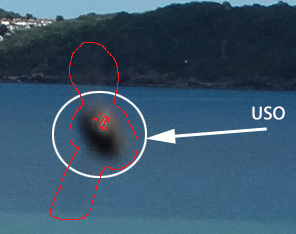 Amazingly good when they are steamed and served with melted butter & garlic. And they even have useful little handles to eat them with.

posted on Aug, 3 2020 @ 05:46 AM
link
Amazing that this one guy keeps seeing these objects and yet, despite being a very popular holiday resort, no-one else does!