President Donald Trump abruptly ended his press briefing on Tuesday when CNN reporter Kaitlan Collins pressed him on his promotion of a quack doctor’s dangerous claims about COVID-19.

On Monday night, Trump shared a video of the doctor who falsely claimed hydroxychloroquine is a “cure” for COVID-19 and that it obviated the need to wear masks or undertake other mitigation measures during the pandemic. Some of her claims were clearly wrong on their face — it’s important to reduce the risk of catching diseases even if we have a cure for them — and top experts argue that the evidence continues to give little indication that hydroxychloroquine is effective against the virus. The video Trump shared was so dangerously wrong that social media platforms began removing it

The doctor in question; Stella Immanuel 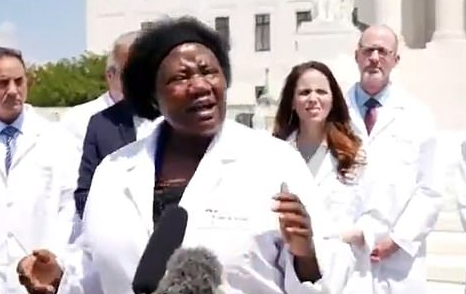 Immanuel, a pediatrician and a religious minister, has a history of making bizarre claims about medical topics and other issues. She has often claimed that gynecological problems like cysts and endometriosis are in fact caused by people having sex in their dreams with demons and witches.

She alleges alien DNA is currently used in medical treatments, and that scientists are cooking up a vaccine to prevent people from being religious. And, despite appearing in Washington, D.C. to lobby Congress on Monday, she has said that the government is run in part not by humans but by “reptilians” and other aliens.

She still has her old videos on Youtube so I recommend you check it out while they're still up. Link below;


Not too familiar with the other individuals who appeared in that video, and hey, being highly religious and conspiracy minded certainly does not dismiss actual facts you may present. But that's the problem, we don't have any solid facts from these individuals, just claims. I kind of wished Facebook and others would just let the video play through. It's ignorance, but allow the video to go under scrutiny. In anycase, with regards to Trump, there are plenty of doctors and papers out there in favor HCQ. It's any wonder why on earth he opts to jump on any viral social media posting without verification? Again, he's the president of the United States. He can't expect to post willynelly without being held accountable.

Update: just side note as well, Trump walked out of a follow-up question. His initial answer below:

“I can tell you this,” he said. “She was on air with many other doctors. They were big fans of hydroxychloroquine. And I thought she was very impressive in the sense that where she came — I don’t know what country she comes from — but she’s said that she’s had tremendous success with hundreds of different patients. And I thought her voice was an important voice, but I know nothing about her.”

So is this TDS, an attack on quackery, the issue crazy doctors are allowed into certain organisations, an attack on alternative medicines. What were her claims, what was Trumps

I am pretty sure that quinine does help virus control.

Not sure you’re general direction

This cements it for me.

The People's Glorious Sock Puppet Biden will reign for a 1000 years!

posted on Jul, 28 2020 @ 09:19 PM
link
this is just a woman afraid to pray because of people like you who cant find original content on the internet that feel like for some reason they need a voice. Have you ever felt like the whole world was attacking you? No. Does she? yes. Will you ever? no. Irrelevant comparison; you will never be on the same playing field as the people you supposedly have so much distaste for. Sad.

Finally, David Icke will be the new white house press secretary (for the next few months)!

a reply to: Southern Guardian

In the true spirit of Democratic Party Americans everywhere...

You are attempting to silence a black female Doctor.

It would be my fondest wish that other Democratic Party people doxx you online, find out where you live and have a bunch of white 20's women burn down your house in a show of solidarity to what you have just done to the black community.

Then maybe build a statue of you and topple it.

Arnie123
+12 more
posted on Jul, 28 2020 @ 09:22 PM
link
I noticed you never came back to your Reagan foundation thread after the conflrct of interest was discovered.

Anything having to do with CNN is rightfully shutdown. CNN, as a propaganda outlet, will simply slander and twist Trumps words, there is no point in answering their "gotcha" questions.

As for the OP, you answered it with that last paragraph.

There's literally nothing to see here, say your peace and move along folks.

carewemust
+11 more
posted on Jul, 28 2020 @ 09:23 PM
link
a reply to: Southern Guardian
It is Overt racism to silence this woman's right to free speech, as Twitter, Facebook, Google has done!


who falsely claimed hydroxychloroquine is a “cure” for COVID-19

So CNN are doctors now. Wait, they claim to know everything so you just take their word.

Noted so that I can point it out to you when we get back to family values such as telling the truth.

posted on Jul, 28 2020 @ 09:26 PM
link
a reply to: Southern Guardian
She helped me get rid of not only gypsy curses, but a pirate one too.
Try her chicken blood hangover cure, its got what plants need.

I'm still waiting for the Ministry of Truth to go after her claim of curing 350 people of the dreaded corona using the hydro-thingy?

Instead - 'quack' & 'false claims' soundbites are thrown around like a monkey flinging sh!t, bannings and deletions across multiple social media outlets abound and everyone focuses on the demon sperm.

Good stuff - the TVs and Soros funded info outlets have done an absolute number on you.

Doctors are smarter than to use the word 'cure' without repercussions. Thats why it looks so uneducated when someone uses a quote like this. It just feels like a meme after a while

posted on Jul, 28 2020 @ 09:32 PM
link
It would be funny if it wasn't so damn sad that half the country looks up to this flailing clown faced conman and his traveling circus of freaks

We're not talking about Biden though.

originally posted by: Arnie123
I noticed you never came back to your Reagan foundation thread after the conflrct of interest was discovered.

I think in keeping with the OP title you meant to say...