posted on Jul, 26 2020 @ 01:20 AM
link
I was watching an old favorite, Equilibrium, and from the scene where they are burning "La Gioconda" to the scene of DuPont's voice propagandizing about man's evil nature when a very brief segment of Tank Man was shown. This led to me pausing the movie and typing this.

All of you should be aware of the iconic photo of "Tank Man." At least I hope so. I'm sure there are some younger people who aren't familiar.

To be clear even those who have seen the photo, and aware of the events in 1989 China, still don't have a clear picture of what exactly happened in the events of the pro-Democracy protests in the Tianenmen Square. This is due to the fact that they didn't have access to the internet. Everything was coordinated by word of mouth and paper. The Chinese government censored the event and banned any mention of it. Merely speaking about it can cause a person to get in trouble and arrested. Therefore, none of the older people are inclined to taok about it. It isn't taught in school, and the 30 and under crowd are mostly ignorant of their own history.

This was a time when film was still the major medium for photography, where there was no social media. No Instagram, Facebook, Imgur, TikTok, Likee, Yandex, Periscope, Tango, Livit, Bigo, and no Twitter. The film had to be snuck out of China.

And yet this photo made it around the world: 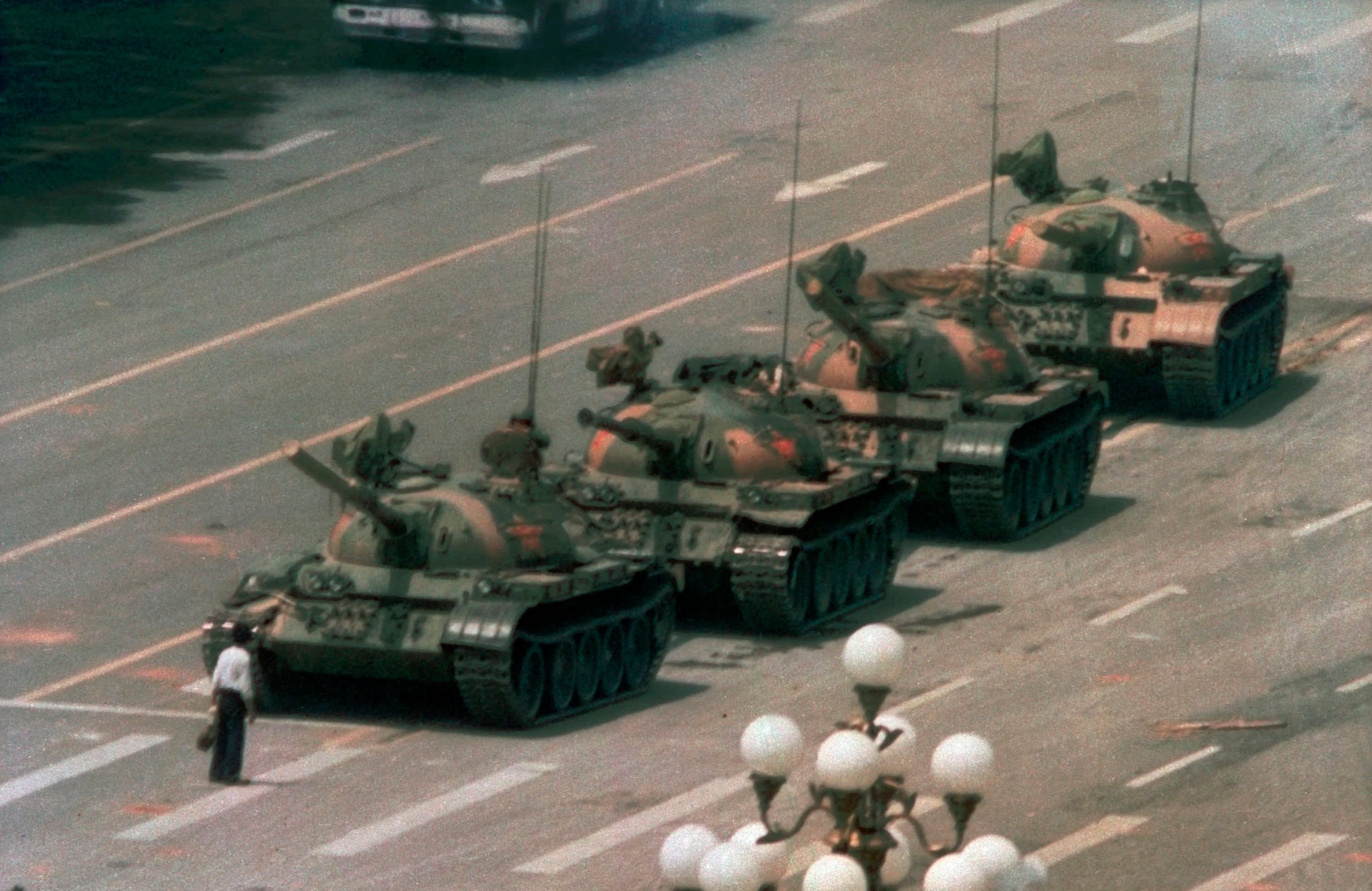 In truth there are known photos and/or video from five different photographers.

Even so the media has always presented Tank Man's demise uncertain as he stood in front of the approaching. Sometimes they'll will run just enough footage to see the tanks slowing down.

I was born in the year following the incident and as such I grew up thinking he got ran over. Then, I remember hearing that he didn't get ran over, but I never saw proof of it until much later.

I want to use this opportunity to show the footage that shows the the entirety of events. The video shows that even with the courage and bravery he showed by standing in front of the tanks. He actually climbed on top of them and spoke with the soldiers. He then continues to stand in the way of the tanks before being pulled off.

To this day it's unknown what his fate was. It's most likely that the Chinese government did away with him.

But there is some truth to the tanks running over people.
Fang Zheng wasn't as lucky as he got run over, and had his legs mangled, while trying to save a woman from getting crushed. 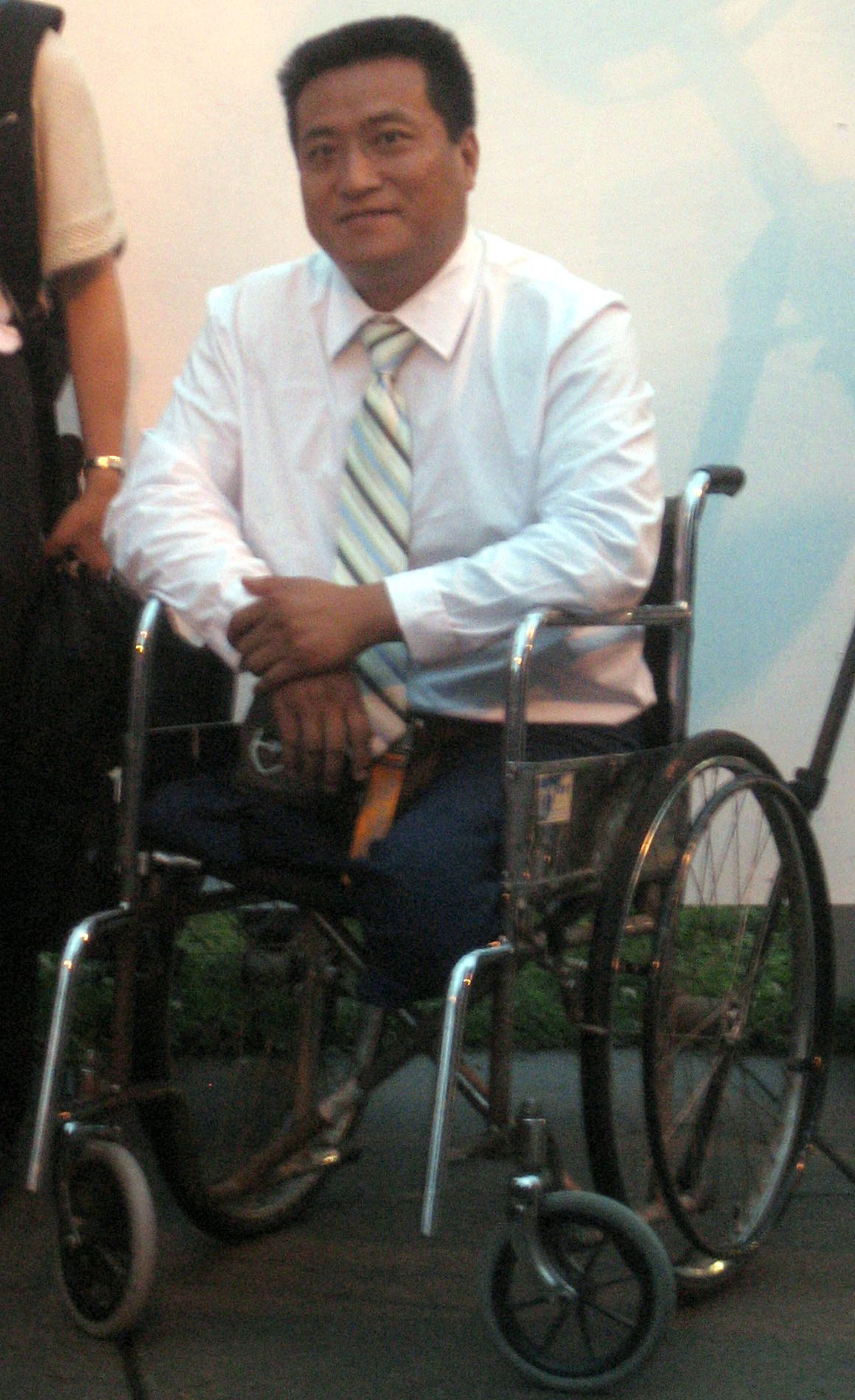 He was arrested twice for refusing to refrain from speaking out against his government, and after his second release he left for the US.

The Chinese people's struggle against Communism isn't a new ordeal. The only reason China remains a Communist nation is because of big government, the ruling party using intimidation, violence, censureship, and social standing to keep people in line.

posted on Jul, 26 2020 @ 02:18 AM
link
I still remember the events of Tiananmen square, got a lot of media at the time. Started out as a student protest that grew over 4-5 days. The CCP finally said enough and sent in the troops. Lot of people died.

The story I got about Tank man, he survived the encounter with the tanks. Due to the publicity it got he was high on the wanted list. It took a few weeks, maybe 2 months at the most until the authorities found and executed him.

(post by hopenotfeariswhatweneed removed for political trolling and baiting)
AutomateThis1

posted on Jul, 26 2020 @ 02:51 AM
link
a reply to: AutomateThis1
Personally, i remember him getting run down as recently as 2008-2009 or so when we watched the footage again in university and had a big discussion about the brutality of the chinese government, but false memories and what not.

That sounds mighty close to thinking like a Marxist.

There's a little tid bit of history that tends to get overlooked, that part where the Bolsheviks organized, had an end game goal, and were sticking to it. When things were starting to run a little too well Lenin and Trotsky had to slow down progression and reinforce the idea of one giant working class, middle peasants.
Programs were put in place to take urban workers and put them into rural areas to learn how to work fields, and rural workers to work in factories to learn how to use machines.
When Lenin died, Trotsky was on his own, but greed was building from within the Bolsheviks and former rich land owners and bureaucrats were bribing guys like Stalin.
The idea of building communism slowly were cut right off when that happened.

This is why communism can never be achieved. Power shifts far too quickly. China hasn't been on the path to communism since Mao lost control. They aren't even socialist. But they do take into account to what Marx, and other critical thinkers applied to social structures, and make capitalism run like a well oiled machine.

What's happening in the US isn't the 'left' or communists, trying to subvert the masses to implement some socialist utopia, if that were true then they haven't done a very good job at 'brain washing' the masses very well now have they?
Corporations, banks, and government are becoming a merged form of government, dictating life through media, advertising, and divide and conquer tactics. The US is headed more towards fascism than communism.

This isnt the mudpit. This is a thread about China. Any more of that and wr will start handing out post bans

I don't need a history lesson.

And nothing you have brought up negates anything I have said.

The majority of people in the US who claim to be Marxist or communist are idiots.

I have spoken out about corporations before.

I have stated in this very thread that communism could be a decent thing at some point in the future, but when people try to implement it and keep it through violence it doesn't last very long.

Marx himself stated in "Das Kapital" that capitalism leads to socialism.
Marx and Engels never even made a definitive distinction between socialism and communism other than early models of socialism were utopian pipedreams.

I personally believe that even those who hope that through the failure of capitalism to the emergence of a more socialist economy are rooting for a pipedream.

Communism arose as a reaction to the industrial revolution.

Even if people who claim to be Marxists and communists got their way it wouldn't be forever unless they were able to use force to perpetually keep people in submission. Communism by violence doesn't lead to freedom. There will always be a group of disenfranchised, angry people.

The wannabe communists are a minority and they're not very well organized. They problem is when they get elected into positions of authority.

I won't disagree that we could very well see a fascist government, but I don't lay the blame solely at the feet of people who call themselves Republicans or conservatives.

The people on the far left and certain Democrat politicians are doing just as swell of a job leading us towards a fascist state as well.

And as far as your quote goes. I can be against the government, CEOs, the the MIC, and the PIC, and still not agree with Marx, Engels, commie wannabees, and other people who desire to have authority over me.

The point of my post is exactly what you said... that power shifts no matter what. Communism is something best described as forever becoming, not built.

Marxs dialectic was pretty straight forward, capitalism and colonialism will spread around the world, fall into crisis over and over and socialism will take its place. He then points out driving forces behind it as well, alienation of the worker, class warfare, labor theory, and automation were just a few but the major ones.

Communism was far too prophetic to come to reality. Its like the second coming of Jesus and the anti christ, it might happen one day, but guess what we will never know until christ himself comes down again... gee great.