posted on Jul, 22 2020 @ 06:17 AM
link
In the history of Russia and the USSR, there were many cases when service dogs performed feats that were not available to many people. In this thread, I want to tell you, dear members of the form, about 2 cases of unparalleled feat of service soldiers during World War II. 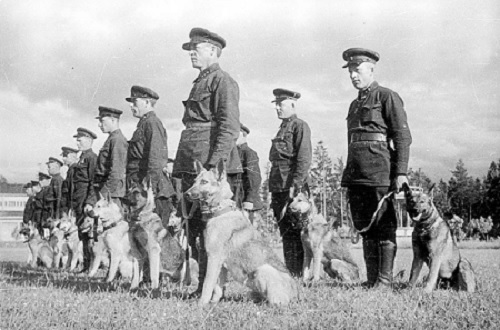 On July 30, 1941, about 500 border guards under the command of Major Fillipov, together with dog handlers and dogs, fought the German tank division "Leibstandarte Adolf Hitler". The Red Army tried to stop the enemy in the village of Legedzino, Cherkasy region (Ukraine). The battle was fierce, at first the Germans could be contained. The border guards destroyed a large number of enemy soldiers and officers, and in addition, knocked out 17 tanks. However, the forces of the Germans were many times superior to the forces of the Soviet soldiers, and soon the border guards began to run out of ammunition. It was decided to throw the last reserve into battle - cynologists and dogs. Thanks to the unparalleled feat of the Red Army soldiers and the excellent training of shepherd dogs, the enemy's offensive was delayed for another 2 days. Dogs with mines threw themselves under the tracks of tanks, and German soldiers were attacked in teams and tore out with their teeth. The border guards in this battle met their death in full force, as well as most of the dogs. The surviving dogs were shot by the Germans after the battle. 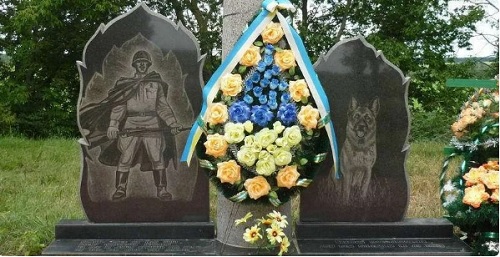 Both dogs and people were buried by local residents in a mass grave after the battle. After the war, in 1955, the remains of both were reburied, and in 2003 a monument was erected in honor of this battle in the village of Legedzino. It was built with funds from WWII veterans. 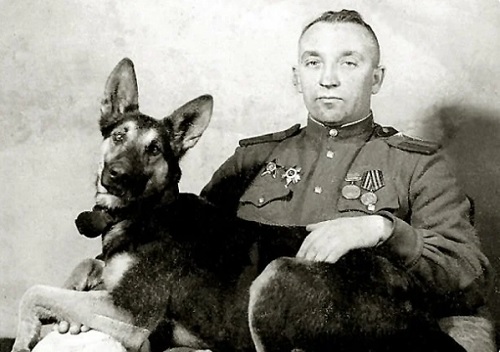 This is the only dog ​​in the history of the USSR, and in world history, who was awarded a state award for services to the homeland in battle. The dog was the record holder during the war years in the number of bombs, mines and various explosives discovered. And after the war, Dzhulbars also established himself as a wonderful actor, playing the main role in the feature film "White Fang". 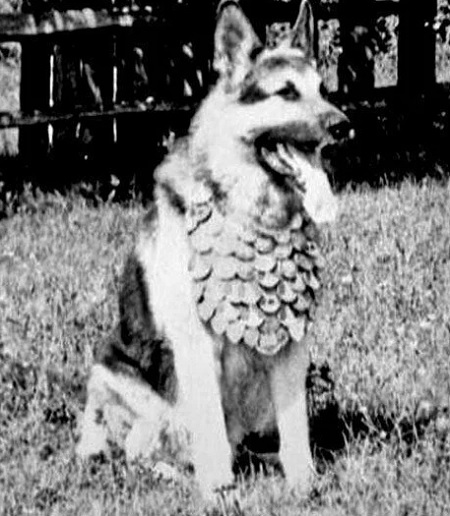 Dzhulbars became so famous that Joseph Stalin found out about him. It is known, and he ordered to give his overcoat in order to make a special cradle from it, in which the dog would be carried at the parade, since at the moment of victory the dog was wounded and could not walk himself.

Many pets of the Central Kennel School also attended the parade apart from Dzhulbars. Major General Medvedev, who was the head of this school, reported to Joseph Stalin that the dog could not walk, as he had not yet recovered from his injury. Then Stalin said: "Let them carry her on my greatcoat." And so it happened. Behind a box with sappers, who also led their pets, the chief dog handler of the international school of dog breeders Alexander Mazover carried Stalin Dzhulbars in his greatcoat. 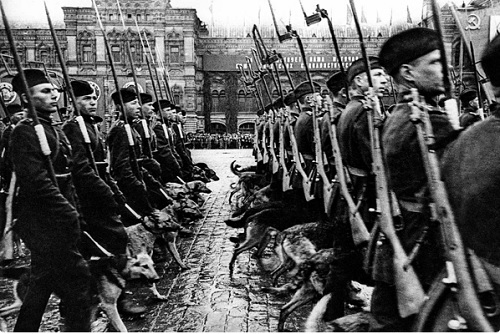 After the war ended, many cities, houses, streets were mined. One could see the inscriptions on the houses "Min is not." Such inscriptions were left by sapper soldiers who cleared buildings and streets with dogs.

During the war years, the military trusted those sectors of the front that were cleared of mines with the help of dogs, since it was believed that the work of sapper dogs was impeccable and they would always find a mine. There were also leaders and aces among the dogs who worked with sappers. In special bureaus and archives, there is still information that the best mine detector, if I may say so, was a dog named Dzhulbars, she worked with soldiers of the 14th engineering brigade. I must say that Dzhulbars worked not only on the territory of the USSR. After the troops of the Red Army went on the offensive in Europe, the dog worked on many historical buildings. For example, numerous buildings in the Czech Republic, Austria, buildings in Germany have been saved and have survived to this day, thanks to the wonderful feel of this pet.


...There were several reasons that these methods didn’t work.

...Anti-tank dogs started being used in earnest in 1941, when German forces advanced on Soviet lands. Thirty dogs kicked off what would be a rather lacklustre debut for the exploding dog-force; indeed, the dogs were so ineffective that the Soviet military was accused of simply sacrificing them.

...A much larger problem was that the dogs had been trained with Soviet tanks, not German ones. Soviet and German tanks used different types of fuel, and some of the dogs sniffed out the fuel they were used to and trotted off to blow up the tanks used by the very military that trained them.


...However there were problems with these canine mobile mines. If a dog was frightened by the commotion and activity on the battlefield, it might return to its handlers, and when it jumped into the trenches the bomb was likely to detonate killing friendly troops.

Another problem was due to a poor training strategy. Soviet tanks were used to train the dogs, and they ran on diesel fuel. The German tanks however, used gasoline. Because dogs are so attentive to the smells around them, the German tanks seemed quite different than the Russian tanks that they had trained with.

Thus it was not unheard of, for a dog to seek out a Soviet tank behind the Russian lines because it smelled of diesel rather than the German tank in front of it which smelled of gasoline.

There was also, however, a psychological problem for the Soviet soldiers. The dog trainers and handlers began to rebel at the cruelty involved in destroying dogs that they had worked with and often formed an emotional bond with.

If, for example, a dog turned away from the tank and started to run back towards the Soviet trenches, to prevent injury to the soldiers should the bomb detonate, returning dogs had to be shot, often by the very people who had cared for them.

Even if the dog was successful, the trainers had to watch an animal that they knew well as it died a horrible death that they had it sent it to.

This made the dog handlers unwilling to work with new dogs, and some doubted the morality of their superiors complaining that the Army was not happy with just sacrificing people to the war but felt that it was necessary to slaughter innocent trusting dogs as well.

Still, it's a fascinating part of history,

These were ordinary dogs that served on the border and were trained in this. [snip]

Maybe later the dogs were trained to fight tanks, but that was, if it was, later.

They will do a better job guarding her than we monkey men have.

posted on Jul, 22 2020 @ 07:33 AM
link
a reply to: RussianTroll
You can't make a thread about Russian dogs without mentioning the mighty Ovcharka.

My friend years ago had one of those and a Tibetan mastiff..the Ovcharka made the mastiff look small.
The Ovcharka was really good natured,but if he got spooked and started barking,you could feel all the air in the room getting displaced,like when you are very close to a huge bass speaker at a music concert.
The sort of noise that could shake the neighbors walls and set off car alarms down the street.
Man he was huge-he had his own 3 seat sofa in the front room,and he more than filled it.

Impressive beasts, the molosser type breeds are over ten thousand years older than other types, (most likely even older).