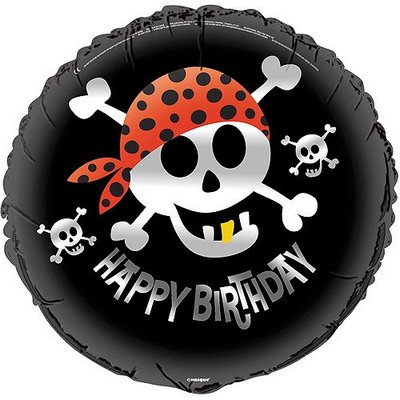 The picture above is a generic mylar party balloon. The actual character featured in the following testimony had a yellow background color with a long red ribbon string hanging down. I don't actually remember what color the string was, I just wrote red to add a sense of specificity, so forget about the redness of the string, it doesn't really matter what color it was, yellow, white, whatever; doesn't matter. The fact that there was a long string does matter.

The incident occurred during late January and into February of 2012. A relative had a pirate themed birthday party. The mylar Jolly Roger was a souvenir brought home from the party. It followed me around the house of its own accord, or so I thought at the time.

I would be sitting in the dining room at my computer, look over my shoulder, and there it was, watching what I was typing. I would later be watching television in the living room, look around, and there it was behind the couch looking over my shoulder, watching along with me. When I went into my bedroom to sleep, I would check to make sure the balloon was not following me. But if I happened to wake up in the middle of the night, it would be there in the corner of the bedroom watching me.

The helium stays in mylar balloons much longer than it does in latex balloons, but eventually even mylar balloons begin to float lower. The weight of the string over matches the lift of the remaining helium.

Finally, at the end of the balloon's effective life, I didn't think much of the fact that it was once again in the corner of my room, floating half way between the floor and the ceiling. So I lay down on my sleeping mat and went to sleep. When I awoke in the morning the balloon was two inches from my nose, staring straight into my face. I looked at the string and visually traced it back to the corner, where the bottom was on the floor. The angle of the string was just perfect to place the barely inflated balloon right above my face.

Of course I was extremely creeped out by that. "How long has this been right in my face while I was not conscious of it?" That's one of the questions flitting through my mind as I shuddered.

This happened in 2012, before I knew what possible meaning it may have. I just thought of it as one of those things that happens. Around about 2016 I started reading about Pastafarianism and their deity, The Flying Spaghetti Monster, the creator figure in their religion.

And being a slow and careful thinker, it wasn't until 2017 that the dots connected. Pirates are the messengers (angels) of the Flying Spaghetti Monster and the Jolly Roger is the stereotypical symbol of piracy. So it all makes sense. It must have been His Noodley Appendage that caused the balloon to behave the way it did.

Now you may ask, "Why have you been sitting on this truth for three whole years without sharing it?"

All I can say is that I am prejudiced against pirates. I don't approve of piracy at all. Pastafarianism is not the religion for me, even if the Flying Spaghetti Monster is proven to be real. I don't want to wear a colander on my head.
edit on 19-7-2020 by pthena because: changed a word

I am getting laughed at by duckduck.....why they laughin at my search.....


About 6 weeks. late January and through February.

I think I threw it away after our last encounter. I was creeped out!

I only have 3 questions for you.


1. Do you wear shoes indoors in your home?
2. Do you have carpeted flooors?
3. How many people live in your home including large pets.

I speculate you live alone. Have a no shoes policy indoors, and carpeted floors.

If correct my hypothesis is as follows. The mylar balloon is attracted to the static charge given off by your socks rubbing on the carpet as you travel through your home.

As you russtle in your sleep at night your blankets as well as your hair on your pillow do the same. And viola you have your slow trailing static seeking pasta deity.

I await your reply.

I seemed to be the only one followed about. The house had high ceilings (11 ft). That leaves a very substantial distance in which the balloon would have to lower itself in order to pass from room to room. And yes, I did ask the other residents whether they were playing a trick on me. They denied it, not in a laughing to themselves sort of way, but rather puzzled.

posted on Jul, 19 2020 @ 01:37 PM
link
Not sure, but as described the Flying Spaghetti Monster seems rather fleeting.

Now it's here, and then it balloons over there.

posted on Jul, 19 2020 @ 01:44 PM
link
Mylar balloons have been considered messengers of evil for thousands of years.

The FSM would probably allow nacho cheese on pasta, I think.


OH NO. The color of the string DOES MATTER.......There have sprung up within the Pastafarian religion, schisms devoted to and promulgated centering around the proper color of string straggling beneath their balloonish messengers. There are likewise fractures within those schisms demanding true faith to the length of those strings. Improper worship of string length and color can result in exile to the afterlife called ''Noparmigiana ''

I had a birthday bouquet of mylar with my name on them. They celebrated with me for almost a year, I just couldn't get rid of them. Hiding in closets and stuff. One afternoon while on ATS it had gotten hot in my office so i turned on the ceiling fan to get a breeze going. Stupid messengers, they floated regally into my office behind my back and were swept up in the righteous currents and tangled in the spinning blades chanting their liturgical mantra, ''whack whack whack.......

So yeah, thanks for the uplift today P. Great thread.

Wikipedia say mylar(biaxially-oriented polyethylene terephthalate) was developed in the 1950s. I never even heard of it until 1975. So I don't know which ancient texts to check to find out whether it's good or evil.


Stupid messengers, they floated regally into my office behind my back and were swept up in the righteous currents and tangled in the spinning blades chanting their liturgical mantra, ''whack whack whack.......

Oh man! All this time I've been chanting "Wacka Wacka"! I hope I haven't insulted the magical messengers, I don't think I could survive a season in ''Noparmigiana ''!

You're welcome.
I was afraid that if I joined the Pastafarians then there would form an anti-piracy sect. Once schismatism takes hold there's just no stopping it.

I think that ''Wacka Wacka'' is some kind of ''foreign'' language that would be acceptable to most adherents.

OK, but I wonder, can this creature be tamed and domesticated?

Instead of a "Flying Spaghetti Monster" can't we have a more civilized monster that cooks you spaghetti ala Dawkins., and does the dishes?

No, that would be pathetic.
We need the Spaghetti Monster on his toes!

Good thinking. There is in one of the many bi-laws, an advisory against pirates do to a short lived pirate infestation with ''noodle nipping'' parrots on their shoulders. Can't have that so ''out wit cha''

posted on Jul, 19 2020 @ 02:23 PM
link
Pfft, nonsense. What you experienced wasn't the flying spag monster, it was obviously the hovering noodle beast. For this insult, we crusade!

Now hold on, we can talk this out!

Which dots must be connected to get from Jolly Roger to hovering noodle beast?

Just looking at the question makes it seem like a matter of semantics. Do your banners read: