USS Bonhomme Richard on fire at Naval Base San Diego

originally posted by: AugustusMasonicus
I think I'll wait for the Navy to make a comment on that.

US carriers have suffered catastrophic accidental damage before, USS Forrestal for example, then been repaired and gone on to have long careers. Young ship, lots of life left in her when that accident occurred.

Likewise, my father served on an aircraft carrier HMS Victorious in the 1960’s, a relatively minor fire saw that old ship scrapped.

All depends on cost, how much life the ship has left in her etc.

Laid down 25 years ago, in service for 22 ... I suspect it’s razor blade city for USS Bonhomme Richard. Sad end.

Hope the injured sailors and firefighters make a swift recovery. 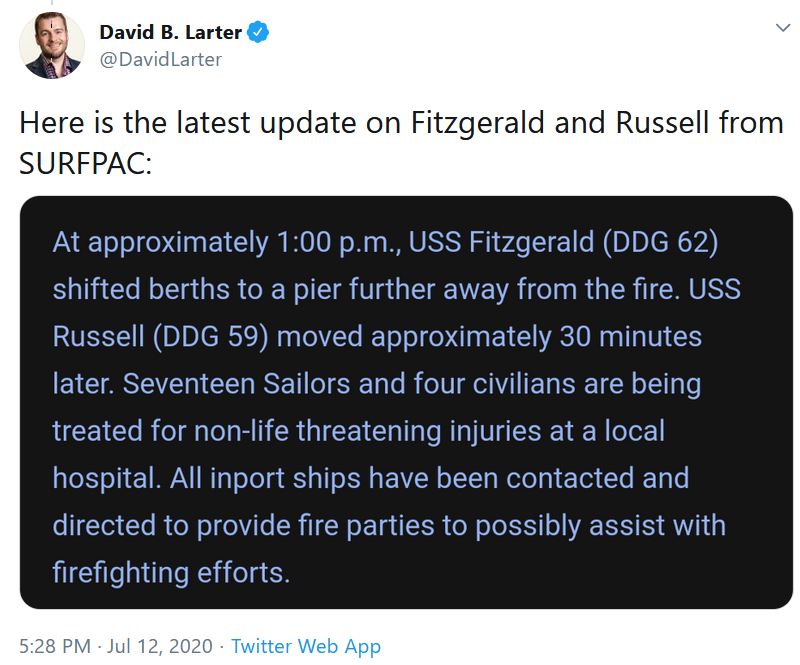 originally posted by: carewemust
a reply to: research100

posted on Jul, 12 2020 @ 04:37 PM
link
There's a renewed fire on the stern. Black smoke, indicating fuel burning.
If you check the progression of the fire on the linked stream four the past four hours, it looks like the fire has been spreading through the entire hangar deck.

originally posted by: mightmight
There's a renewed fire on the stern. Black smoke, indicating fuel burning.
If you check the progression of the fire on the linked stream four the past four hours, it looks like the fire has been spreading through the entire hangar deck.

The forward bridge/island structure looks like it’s a total loss. The fire boats have been spraying water on the starboard hull under and just forward of the the bridge for the last 3 hours, there’s serious scorching to the hull under the bridge and just forward of that too. It must have been an inferno in those compartments. You have to assume those parts of the hull are now seriously weakened.

There’s various reports of an explosion or two and damage to the hull on the port side. With all that, the loss of the hangar space, an engine room fire, smoke damage throughout the ship, electrical fried etc ... it does look like it’s a total loss, doesn’t it ?

I suppose one comfort is that it wasn’t a fire on board one of the larger, nuclear powered carriers. Although, being realistic, that’s just a matter of time.

posted on Jul, 12 2020 @ 04:53 PM
link
Is this freak accident revenge by Eyeraaaan for all the accidents in the Eyeraaaan nuke sites the past fortnight?

I hope they put Every thing on high alert.
get your bug out bags ready the chinese are coming.
If one more thing like this happens!
Then panic!

Napthta may have been the explosion later on in the fire. It was reported by officials that the fire got to an area where Tool Cleaning chemicals were. Napthta is an excellent solvent for cleaning tools. There was fire crew on the ship but were evacuated afterwards thus making this a "Surround And Drown".

As far as black smoke, just carbon. You get black smoke as long as fire has food/fuel . Heat, oxygen and a fuel source ( fuel for fire can be anything giving the right mix steel not so much ). As far as some said earlier, this ship has been in dry dock since 2018 and there are no aircraft or JP5 or any other jet fuel on this ship.


Edit Smurfy just posted this in the original thread.

San Diego Fire Chief Colin Stowell told CNN that all fire personnel immediately withdrew from the ship and a nearby pier was evacuated following an explosion onboard that was traced to a 55-gallon drum filled with a chemical used for cleaning tools. He said that there was also explosive ordnance onboard and that firefighters had to be especially cautious.

Do you have any idea how many fires there are a year while ships are in dock? The Fitzgerald had multiple fires while being repaired. Another Burke had a serious fire while being upgraded. Fires happen, usually due to complacency and cost cutting.

Typical physical properties for Jet A / Jet A-1[9]

On 5 August 2017, after taking off from Bonhomme Richard a U.S. Marine Corps MV-22 Osprey of Marine Medium Tiltrotor Squadron 265 with the 31st Marine Expeditionary Unit crashed in Shoalwater Bay on the east coast of Australia.

Admiral reports No Ordnances onboard.
17 military and 4 civilians injured.

At 8:30AM the fire was reported in the lower vehicle storage area on the Bonhomme Richard, but the exact location and source are unknown.
The crew began to fight the fire immediately. Local fire departments were quickly called and reported to the ship to begin fighting the fire. The ship's crew was then evacuated and accounted for. Sailors are back fighting the fire now.
All 17 wounded sailors are in stable condition.
No ordnance is onboard.
All on the scene are now trying to save the ship.
Not clear what caused the reported explosion related to the fire on the ship.
1,800-yard safety perimeter around the ship at this time.
Fireboats are trying to cool the hull.
The type of fire is an "ashy" fire indicative of burning debris, not fuel or any other toxic substances.
The Admiral says the ship will sail again.
1,000,000 gallons of fuel are on the ship, but that fuel is located below the heat source.


At this point the Admiral says the ship is salvagable, but you would think that might be premature, when no investigations or inspections have been carried out.
edit on 12/7/2020 by Krusty the Klown because: (no reason given)

originally posted by: Krusty the Klown
At this point the Admiral says the ship is salvagable, but you would think that might be premature, when no investigations or inspections have been carried out.

Salvageable for the scrap yard. 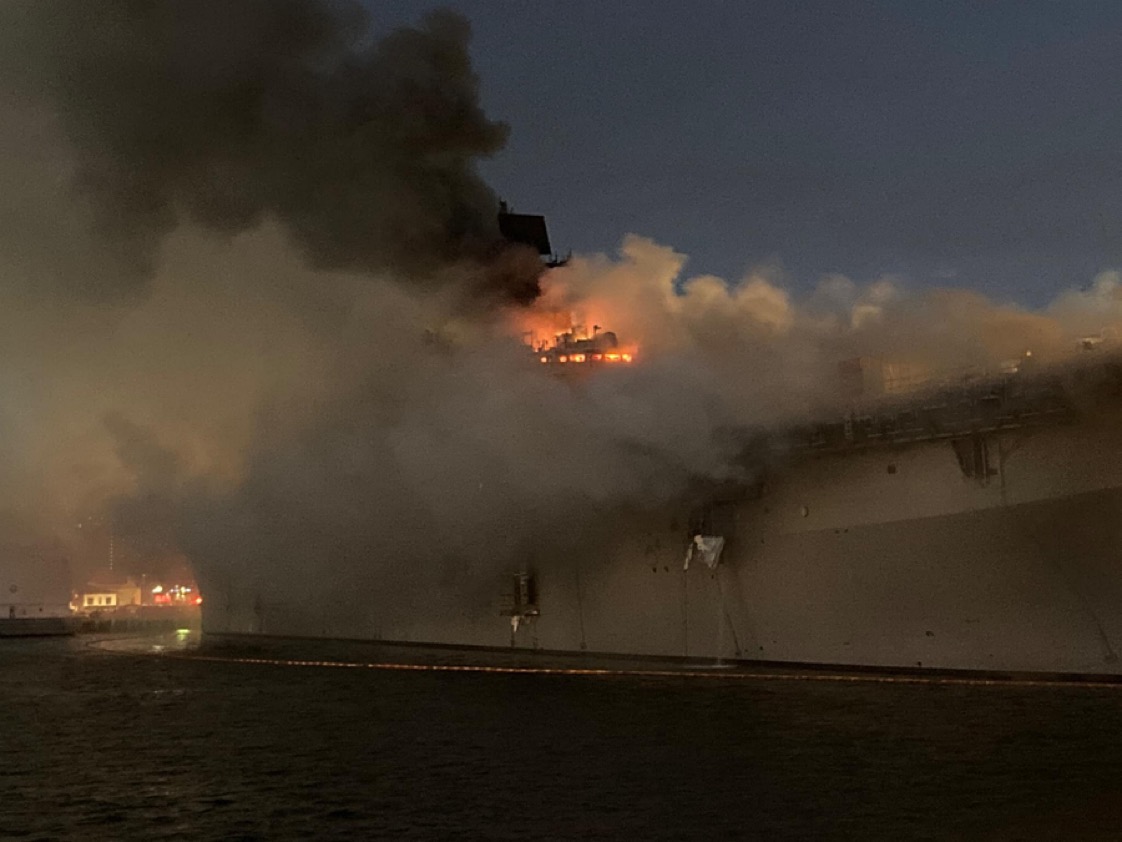 Which refutes your point that the 'ship is lost'. Firefighting is still occurring.

Ship is lost, they just trying to prevent any more damage around it