AOC demanding that Goya foods must be Boycotted because the CEO made pro-Trump Speech.

In case those socialists/communists in ATS didn't know, Goya gave 2 million lbs of free food, in total, and millions of dollars to families being affected by Covid-19...

Goya has a longstanding history of donating millions of pounds of food in times of disaster and desperate need through the company’s global program Goya Gives.

We understand that this is going to be a tough time for many and we will continue to help support families, students, and our communities in need. We are prepared to do our part and help in any way we can.
...

What has the communist authoritarian known as AOC done? She claims she doesn't earn enough money and demanded more. She has made jobs flee New York for tens of thousands of people whom could have been hired, and now the communist authoritarian wants more people unemployed, and for a Hispanic company to be boycotted for disagreeing with her politics.

This proves AOC, and all communists, don't care for the people. The only thing they care for is keeping the socialist revolution alive even if it costs the livelihood and/or lives of everyone. 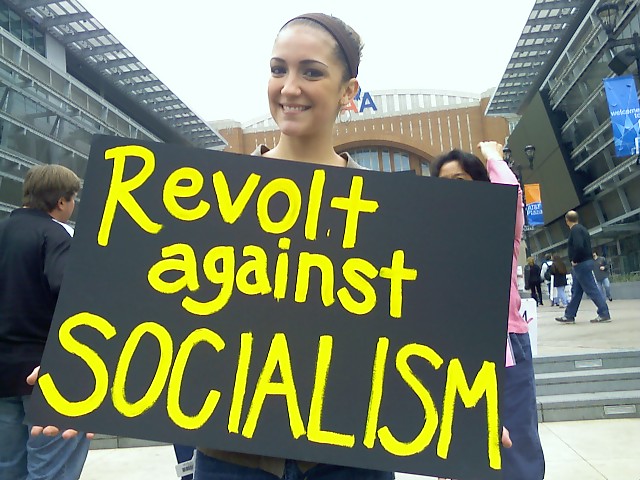 AOC is a danger to all business owners, including small business owners, and for anyone who would dare disagree with her politics. To make matters worse another socialist/communist, "Julian Castro", is siding with AOC in the boycott of Goya foods...

These sort of tactics are used by socialists and communists. What in the U.S. is called "doxxing" is what the castro brothers, Chavez, etc have done.
When AOC and her communist friends take over, she will make public the names of every person whom dared vote against her socialist/communist ideas. Then these people will be denied jobs, will be denied government programs etc.

Which means "all political opposition to socialism/communism must be silenced one way or another." AOC, et al, are following and enforcing the ideals of Karl Marx.

If this crap continues armed insurrection against the socialist and communists must occur. They are already calling to send "Republicans and other conservatives to re-education camps." If you think these are empty threats you are ignoring history. They will make those threats true if they are allowed.

edit on 12-7-2020 by ElectricUniverse because: add and correct comment and excerpt.

Metallicus
+36 more
posted on Jul, 12 2020 @ 03:35 AM
link
Supporting the President of your country shouldn’t incite people to ‘cancel’ you. We live in a clown world led by morons like AOC.

We will see more of these outrage posts. with no follow ups
Because people are in charge.
Make no mistake. This is not an R v. D
We are into a current system vs 1984.

I can only face palm so much.


The world as we know it HAS GONE MAD

No one is allowed an opinion ...... unless it is a left opinion.

are just being in the new world jargon *cancelled*

posted on Jul, 12 2020 @ 04:02 AM
link
a reply to: ElectricUniverse
None of the left will stand against this turd.
Nothing but silence.
From the silence is violence crowd it is pretty funny.

Despites Trumps own comments in the past, it never really hurts or bothers him, if Goya is indicative of anything.

She is a twitter queen and Twitter will make sure she will always look "good", but that's kinda hard when the vast majority of comments are about buying more Goya.

Like I said, Leftist like to be loud, try to Boycott, but realized that there is now an equally massive pushback by Americans no longer sitting idly by. As BuyGoya is trending.

AOC is just a hypocrite and fool, she lets her emotions ride her hard, so much so that she is criticizing a POC business. The left eat their own.

Thank god the CEO isn't a pussy, infact Trump knows a lot of people from across the isles and businesses, he's worked with some for his own brand back before his Presidency.

Think of it, a Businessman President pushing stock and trade, AOC, who pushes to boycott fellow POC business and keep Minorities down, no brainer here people.

It's things like this that really open American eyes, I don't say this lightly, but the Silent Majority is such an overwhelming source of power and leftist keep dismissing it, GOOD we want them to dismiss it for maximum effect.

Prediction: Dems will not only lose November, they will collapse under the heel of the new Socialist of America. While the Dem party as a whole fractures, the Socialist will take over, using the defeat to consolidate more power among themselves. It is here that they will began for their 2024 power grab.

PhilbertDezineck
+6 more
posted on Jul, 12 2020 @ 04:40 AM
link
a reply to: ElectricUniverse
Didn't she protest Amazon from opening up a headquarters in NY? These people are idiots.

Seems like a decent company. Especially in a world where most food companies would rather destroy food than give it to the poor and needy.

posted on Jul, 12 2020 @ 05:23 AM
link
And this is one of the big reasons why the left will lose again come 2020. They're hell bent on destroying American businesses, for the most pathetic of reasons, while Trump is trying to encourage the growth of American businesses. It's clear as day which side will be better for the economy, and when you also consider how batsnip crazy the far left has gotten -- even many that were typically anti-Trump will be voting for Trump. It'll be a landslide that buries the Democratic party, and hopefully instill some sense into them going forward.

posted on Jul, 12 2020 @ 07:18 AM
link
Who takes this inflatable doll seriously except fat little girls who cant vote or have any money to spend?
She should use pictures and logos as most of her audience cant read.

Make ya wonder who's really in need of psychiatric help 🦇

posted on Jul, 12 2020 @ 08:10 AM
link
a reply to: xuenchen
Most likely very old wealthy Democrats, at the end if their years, who've developed a soft spot for these progs.

No wealthy business folk willingly go out to destroy their money makers and they don't like waiting for "change", which leaves those smaller wealthy folk with nothing to lose.

Trust me, I've seen streamers of all creeds, hailing from different games, recieved hundreds of dollars to thousands. Their is yuuuuge money here in the states for a variety of things, to include ones own destruction.

posted on Jul, 12 2020 @ 08:15 AM
link
a reply to: ElectricUniverse
Ask the UK, Israel, and India how socialist policies worked for them after WW2. They all three eventually turned to the free market after seeing increasing unemployment and declining economic growth.

This is among the reasons the cancel culture/outrage culture wants to erase/re-write history, because they don't like what history has to say about their doomed to fail policies.

originally posted by: PhilbertDezineck
a reply to: ElectricUniverse
Didn't she protest Amazon from opening up a headquarters in NY? These people are idiots.


She did, and she was instrumental is convincing Amazon not to build in her state, costing NY thousands of good jobs. Remember on November 3rd we have a chance to take our world back. It’s likely to be our last chance.
edit on 12-7-2020 by Nickn3 because: (no reason given)

posted on Jul, 12 2020 @ 08:27 AM
link
Without Socialist policies and enforcement, how else are big government hogs supposed to control and entrench a population ? 🤓

It will probably simply backfire. I would wager that far more people will choose Goya for their Mexican food nights than will boycott.

This is going to hurt La Preferida.

If this crap continues armed insurrection against the socialist and communists must occur.

What the hell man?
If you don't like a Congress Member don't vote for him/her.

How she is even in that position enspousing ideas radically different then what America is, is still beyond me.

I seriously think, like all countries, we need an Anchor, an American anchor that pushes and provides those American platforms. Anything other is to be immedietely disregarded, like her.

Maybe it's the Nationalist in me, or Patriot.

originally posted by: ElectricUniverse
If this crap continues armed insurrection against the socialist and communists must occur.

When you gonna start shooting something besides just shooting your mouth off? I want action tough guy.