The marvelous mystery of Black Mountain

Now mountains are undoubtedly beautiful; Mont Blanc, the matterhorn, that guy from game of thrones...anyhoo some do have a spooky history behind them, and the spooks that come with them. The most well known would probably be brown mountain in the Appalachia region, and then you have the most famous mountain, Mount everest has many tales of dead climbers wishing to finish the climb from beyond the grave, but there is another mountain people forget in the land of the venomous beaver duck, and the mountain is shown below. 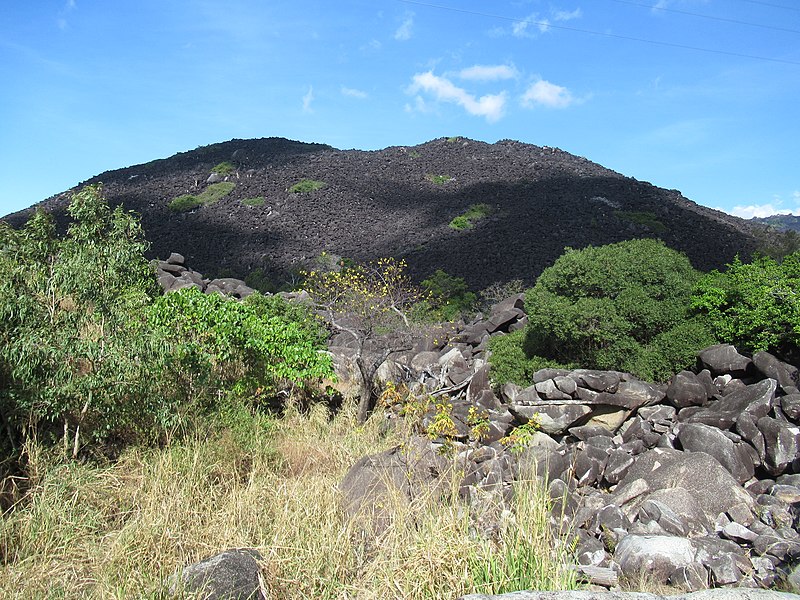 Yes the male beaver duck is venomous, but we refer to them as a platypus, or as the British colonists called them 'badger mallards'

Now it's best that we delve into the indigenous history of this site first, it has a ancient indian burial ground vibe to it, but is still a good tale


Harold Ludwick descends from two clans with traditional ownership claims to the site, the Western Yalinji and Gugu Yimmithir.

He said Kalkajaka, which means 'spear', was a sacred battlefield and the scene of the last spear fight between the black and white cockatoo.

These are the totems representing the inland and coastal clans whose warriors were clashing over hunting grounds.

"They came to blows and many people died and their bones also remained in those mountains, they were put in there," Mr Ludwick said.

It's no doubt that this place is sacred to the local people and spirits, like most other stories from cultures around the globe these spirits act as sentinels and in this case, as expected are not too pleased

Like Uluru, climbing Kalkajaka is hurtful to the various traditional owner groups: the Kuku Yalanji, Kuku Nyungkal and Guugu Yimithirr.

Mr Ludwick believes in Black Mountain's dark forces, which is why he warns people not to enter the site: a mistake his friend from Sydney made during a visit.

"I told him, 'Don't go in there', because I know there's a bora ground, but he was headstrong and wanted to go," Mr Ludwick recalled.

Now there have many recorded disappearances in to black mountain area including humans. However science tried to go buzzkill (before you ask it wasn't Neil DeGrasse Tyson) and this geologist offered this explanation

Geologist Gavin Dear lives near the foot of the mountain and doesn't believe in the myths which he described as ridiculous, having conducted his own tests.

'It's very mysterious for sure and it does have a special power, I have no doubt about that, but it's still just a mountain of boulders,' he told 9news.com.au

He believed the disappearances have more to do with mishap than mystery.

'If you try and climb to the top you've got about 200 calculated leaps you have to make between boulders,"

Never invite nerd to a jock party, however there tales people have weird feelings and apparently so did airplanes

Many people even report a feeling of anxiety and fear when looking at the mountain and its strangely unnatural-seeming formation of boulders. The wind and the shifting of boulders is said to create an unearthly noise, sounding like moans or mournful cries. Pilots that pass over the mountain have also reported strange turbulence and magnetic disturbances, and most pilots now avoid the area if they can.

Now we get to the 64 cent question (i'm broke) does the folklore have merit? many thousands if not millions of people including myself have seen what could be considered paranormal, however various mineral deposits could weigh into it as well.

posted on Jul, 11 2020 @ 12:50 PM
link
I have not been to Kalkajaka. I do respect local advice when travelling around. Already got enough things that can hurt or kill you with snakes, spiders and such. Some places do have a bad energy attached to them due to past events.

posted on Jul, 11 2020 @ 04:54 PM
link
This is interesting! Perfect post for an eerie stormy day here. Taking the slideshow walk through the beguiling Black Mountains now.

posted on Jul, 13 2020 @ 10:14 PM
link
I seem to recall some conspiracy theory or ancient alien theory I should say, that proposed that this mountain is really the covering for an alien toxic waste site. The idea being that the weird way the rocks were all dumped there, was intentional to prevent people from digging it up and killing ourselves.

Not saying I believe that, just that that was mentioned. I think maybe I saw it on ancient aliens or something like that.