Although the comet is moving away from the sun and beginning to fade, that dimming initially will likely be slow, because it is now approaching the Earth. It will be closest to our planet on the evening of July 22 ("perigee"), when it will be 64.3 million miles (103.5 million km) away. Thereafter, fading will be more rapid as the comet will then be receding from both the Earth and the sun.

When and where to look in the morning

As a morning object, the comet's best views will come during a three-day stretch on the mornings of July 11, 12 and 13, when it will stand 10 degrees above the northeast horizon, 80 minutes before sunrise — the beginning of nautical twilight. Your clenched fist held at arm's length measures approximately 10 degrees in width. So, on these three mornings, the head of Comet NEOWISE will appear about "one fist" up from the northeast horizon.

But as its morning visibility diminishes, there is good news: Comet NEOWISE will become prominent in the evening sky after sunset. That will also mean a much larger audience will be able to see it during "prime-time" viewing hours instead of having to awaken during the wee hours of the early morning.

How to see Comet NEOWISE in the night sky this month

In the Northern Hemisphere your chance for seeing the comet in the evening will start on the 12th of July about an hour and twenty minutes after the sun sets.

There is no link here for the live and in color view. You should go outside to see that. 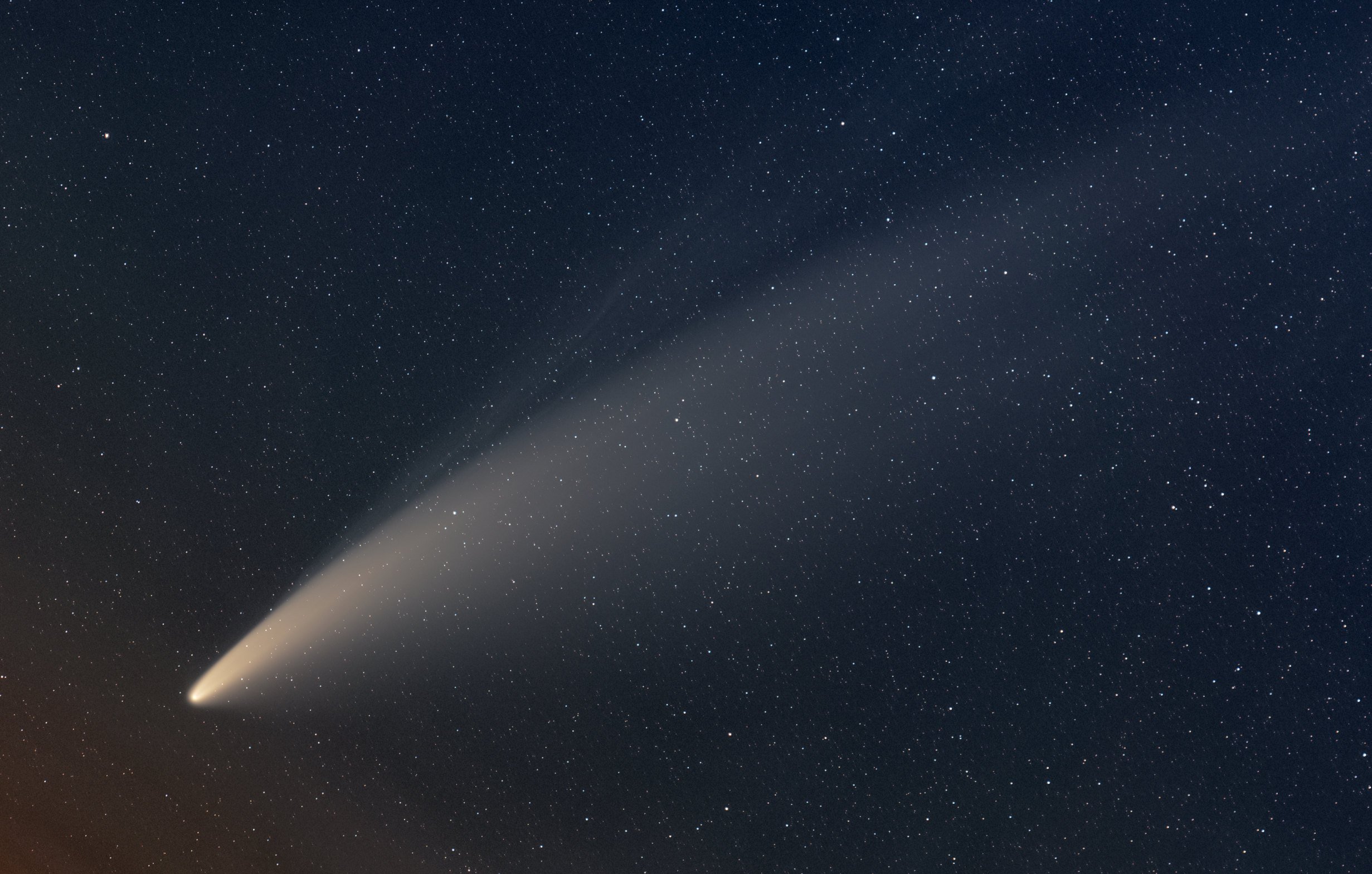 A beautiful view of NEOWISE for the Astronomy Picture of the Day.

Explanation: Comet NEOWISE (C/2020 F3) is now sweeping through northern skies. Its developing tails stretch some six degrees across this telescopic field of view, recorded from Brno, Czech Republic before daybreak on July 10. Pushed out by the pressure of sunlight itself, the comet's broad, yellowish dust tail is easiest to see.

But the image also captures a fainter, more bluish tail too, separate from the reflective comet dust. The fainter tail is an ion tail, formed as ions from the cometary coma are dragged outward by magnetic fields in the solar wind and fluoresce in the sunlight.

originally posted by: one4all
Comet Wise-One is suppossed to be a timeline waypoint for those in the know.

NEOWISE is the name of the spacecraft that discovered it. NEOWISE discovered 26 comets, each with NEOWISE as part of its name.

The name of the discoverer (whether it be a person, program, or observatory/spacecraft) is usually included in the name. of the comet. This particular comet is officially named C/2020 F3 (NEOWISE), but when a comet becomes easily visible and talked about among the public at large, some people find it easier to drop the first part of the name and simply call it by its discoverer's name.

Some examples of other NEOWISE comets are P/2014 L2 (NEOWISE) and C/2016 C2 (NEOWISE), discovered in 2014 and 2016 repectively. Another NEOWISE comet, comet c/2016 U1 (NEOWISE), was a comet that was visible from Earth back in October 2016 using modest binoculars, or even the naked eye (just barely) if conditions were perfect.

The spacecraft is an infrared space telescope that was originally known as WISE, which is an acronym for Wide-field Infrared Survey Explorer. WISE used its infrared telescope to search for dwarf planets, minor planets, Brown Dwarf satrs, stars clusters, and galaxies. WISE itself discovered several comets, all named with the following convention: X/YEAR XX (WISE).

If we think it's confusing that there might be 20+ comets named NEOWISE, then I hesitate to mention that there are more than 200 comets named "LINEAR" after MIT's Lincoln Near-Earth Asteroid Research program, which uses telescopes in New Mexico.

Does it rival Hale-Bopp, at all?

I know NEOWISE is not as bright. How would you compare the two? 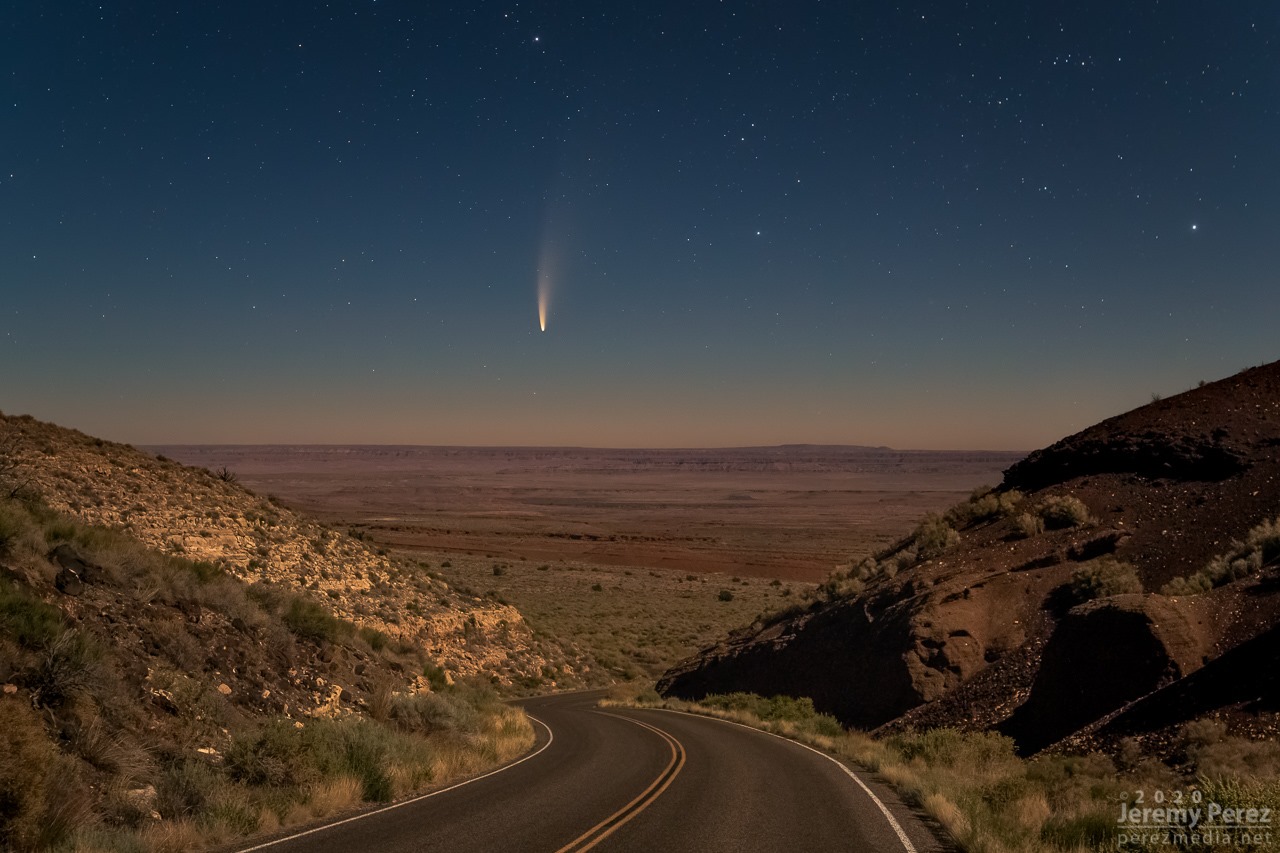 Pictures are nice but they don't really tell you how it looks to the eye.

I think Perez used binoculars for that shot. He often does. He's also good at post-processing.
www.perezmedia.net...

Finally! Man, its been a brutal recent history for duds, glad we're finally getting a good one. Waiting til evening sky though. That early is TOO early for me!

originally posted by: Phage
a reply to: dogstar23


Remember that documentary "Night of the Comet"? We need to find a metal box to hide in when it flies over. I'm lucky I have so much lead paint in my house a gamma ray burst could hit Earth and I wouldn't get any radiation from it (I'm being facetious of course. In case someone thinks that would actually work)

This will be my third, but it won't be the best unless it hits the moon. The last time I saw a comet with my eye's I also had access to military grade night vision gear which made the light in the sky seem like and ocean of glitter in the night sky when I used them. The tail looked massive with goggles on.
edit on 11-7-2020 by Guyfriday because: again since when does the "space" bar mean post?

(post by panoz77 removed for political trolling and baiting)
Guyfriday

originally posted by: Phage
a reply to: Guyfriday

Don't scrape lead paint. In the 90's I learned through a PSA, that kids love to eat paint chips. Just tell them that they'll get superpowers from it. "Lead, Kid tested. Bad mothers approve"

, No, silly. Comets are not the next killer, it's volcanos, calderas and magnetic shift. It's been overcast here in the morning, along with the SAL, so no viewing for me so far. Hey, I have nothing else to do at 4:00 a.m. There's crap on tv then, unless a person is lucky enough to be loaded. In that instance Jim Baker is on at 4:30 (consult your local listings!)

I've been disappointed by so many comets. I hope this is at least visible as a comet and not just a fuzzy blur.

My #3 was a fuzzy blur.
Better than nothing. Way better.


Really nice to see your tawny self somewhat active in the fading glow of ATS.

posted on Jul, 12 2020 @ 01:37 AM
link
Hale bop was way better.
If this brightens a bit though it's worth the view.
A great tail but I had low clouds near me so couldn't get an image of the comet it's self. Maybe tomorrow.