posted on Jun, 30 2020 @ 06:53 PM
link
I recently did a thread on hydrogen seemingly entering the semi trucking world soon

But there is another company treading on their heels.

Hyliion has already developed a hybrid power train that can be retrofitted to existing semi platforms. The whole ordeal looks to be semi simple (pun intended), and appears to only take a few hours. Here's a dated video on that process.


To sum it up and keep the thread short, the boasted benefits are that it assists in breaking which charges the onboard batteries. The electric motors will then supplement driving later on resulting in decreased diesel consumption. They also claim it increases max payload. In the end, they say cost of ownership after 7 years not only pays for itself, but gives the truck a return given less fuel consumption and max payload (the former should be questioned given many roadways still have a max payload).

They are also working on a RNG and CNG (Renewable Natural gas and Compressed Natural Gas) all electric variant. The NG will charge the cells which will in turn drive the electric motors. The infrastructure for natural gas already exists, and they claim that the CNG will be a lower carbon emitter than much of the competition, and the RNG will actually be a net reducer by taking natural gas that would have otherwise be released into the atmosphere without any form of processing. Natural gas prices are also cheaper to run than other forms of energy for the time being, and Hyliion claims further down the road they'll produce a hydrogen variant once the infrastructure and technology have progressed further. 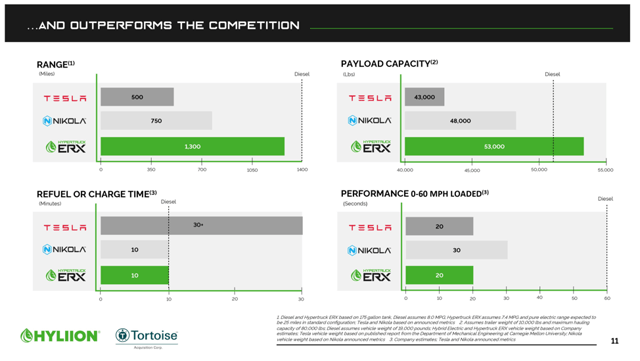 That's the gist of this company, and we can go further in depth if anyone would like. I just figured I'd lay down the fundamentals as I understand them. I'm excited as we're a leader in natural gas production, and this will provide further energy independence. I also love that companies are using the free market to drive people to make better environmental decision through fiscal necessity. I should also give a small disclaimer I'm invested in the company, I got in early on with the company they are in the process of doing a reverse merger with. To me it's a no brainer.

It's cool to see such impactful innovation occurring in an otherwise stagnate time in our economy.
edit on 30-6-2020 by CriticalStinker because: (no reason given)

posted on Jun, 30 2020 @ 07:28 PM
link
Battery technology has a long way to go, it's extremely hazardous to the environment. I have always liked the idea of hydrogen-powered engines, a completely renewable source.

While I agree with you (for standard lithium batteries), my understanding is these fuel cells aren't like said standard batteries.

I don't think they have all the same downfalls, but I haven't looked into this aspect as much as far as the fuel cells. But yes, standard electric lithium batteries aren't an ideal alternative.

But even if the fuel cells use some lithium and or other semi harmful materials... They still make sense to use if it's cheaper than fossil fuels. I get the debate it's not worth it to spend more yet, but if it's cheaper the market will demand it.
edit on 30-6-2020 by CriticalStinker because: (no reason given)

While I agree with you (for standard lithium batteries), my understanding is these fuel cells aren't like said standard batteries.

I don't think they have all the same downfalls, but I haven't looked into this aspect as much as far as the fuel cells. But yes, standard electric lithium batteries aren't an ideal alternative.

But even if the fuel cells use some lithium and or other semi harmful materials... They still make sense to use if it's cheaper than fossil fuels. I get the debate it's not worth it to spend more yet, but if it's cheaper the market will demand it.

Yeah, I get the price component but I believe our government is sitting on pure energy sources that wouldn't affect the environment, nor would they cost much to run at all. Of course those are conspiracies, but that's what I hope we can get to at some point. I'm not talking about free, but a manageable cost that makes sense for everyone.

Let's set aside the environmental part of the debate.

Please show me how fossil fuel would be cheaper to use than natural gas. That debate is true for hydrogen at the moment, but not so much natural gas.

And while I agree the government meddles with oil, I think it is in favor for the oil. So while you think gas should be cheaper at the pump, I disagree. I think we actively supplement that with our foreign policy and sub sequential tax payer dollars.

The lowest price we can get domestic oil from what I hear is 30 dollars a barrel, because that's how much it costs to extract shale, which is what we have abundant supply and immediate access. Even if we did more offshore and Alaskan into the mix, we're still looking at more than natural gas.

Personally I think many just like the idea of oil, because the lobbyists in that sector are damn good. If one is cheaper than the other, while also being comparable or better in terms of environment impacts.... It should be a no brainer.

I'm all ears if you can demonstrate how RNG or CNG are more expensive or harmful.


EDIT: sorry, I think I misunderstood you. It came to me you're probably talking about a different energy source they are keeping secret. I'd be willing to entertain that thought, it wouldn't surprise me... I leave my long winded reply up to show how silly I am LOl.
edit on 30-6-2020 by CriticalStinker because: (no reason given)


Yeah, I'm referring to the energy sources that have been scooped up in the name of "national security". What a bunch of bunk. They're just protecting the oil barons.

Anyway, I have been a fan of hydrogen for a long time, as I said before. There was a guy in our area that had a car running on hydrogen that was processed from water, and I think one in the Philippians some years ago. There was also a guy not far from me that had a "perpetual engine" of some kind, I don't remember the specifics now, but he sold it to a large corporation who summarily shelved it.

There has to be a profit in it or we'll be running on fossil fuels until we run out. I don't want to run out, but I sure would like to see a better, safer fuel than gasoline or diesel. Bio-diesel seems to have fizzled out.

So are you shilling for hyliion? I noticed they'll soon be purchased by tortoise acquisitions and will soon be going public and are looking to increase their stock price. The gist of what they seem to produce is diesel-electric hybrids, with some prototype hydrogen fuel cell hybrids. The biggest news seems to be more about their interest to investors than anything they've actually done.

Lol, it's funny because the ticker they're under right now is SHLL... So if I was, I'd be (am) shilling for SHLL (till the ticker changes).

But I was honest and said I invested in them. I came here to see what people though about the company and direction of transportation. If they're wrong I lose money and it is what it is. I put my money where my mouth was and am going along for the ride.

They have made the hybrid power train which is operational and on the road now. We'll have to see their claims proven by consumers who give data on whether they'll save money in the 7 year run of it. Personally, if it didn't do what they said, I'm sure those companies would speak out. There are some big players using them right meow who seem to be happy.

You are right that hydrogen is the better alternative.

But we have hit a roadblock to its adoption: storage and transfer. Each one of those problems is what is limiting hydrogen fuel cells (that and the high cost of HFC manufacturing).

It sounds so wonderful, “most abundant element in the universe”... but nobody really says, “on earth it is locked up in other molecules and is not really free floating around”. Which means that it will take energy to extract it from wherever you are taking it from.

Material science has not scaled to make pure H2 storage feasible. They can do “lab top” scale but scaling to 10,000 cars a month is still years away. Membrane tech keeps evolving and is not that efficient (it seems to take a bit of high temp and pressure, iirc, no numbers off the top of my head). Maybe when graphene is perfected in production we can line “hydrogen gas tanks” and keep gas from leaking out. But that is not now.

That being said, Australia is claiming that it has a membrane that can convert ammonia, on demand, to hydrogen for fuel cells, at near ambient conditions! Pump in NH3 and out comes H2s and N2s (again, iirc) with the nitrogen vented and the H2 used as fuel. I have a thread on it from a few years ago when it was demoed.

BTW, all “clean” energy sources (renewables, fusion, etc), all are gearing towards hydrogen production so it will probably happen. But not as soon as I wish!

Check out the Olympics, there should be several hydrogen vehicles around!!

I agree with you! It has to happen! Heck, we should be able to extract H2 from waste plastics!!

Problem is, that Big Oil, will say that, “You should extract it from natural gas”... which is dumb. All renewables that are not used should make hydrogen in at least ammonia form and we should switch off coal.

Nikola claims it will make Hydrogen on site for the refueling stations. They say that will mitigate storage and transfer as it will kind of be an on demand type basis.

CNG and RNG hopefully can serve as a stepping stone. If they're right that it's cheaper, it can help the fuel cell concept and adaptation of public confidence.

Nikola seems to have a good idea: generate the hydrogen that you need while traveling!

Then, they figure how far a HFC semi can travel before a refuel, make a number of “pumps” there and on to the next!

Build infrastructure as you go but not rely upon it as you go!

That is what happens when hauling that huge rig around... add a hydrogen evolution in driving around and it may just work!!

Cool topic! Glad others are are thinking about the future!!

Nikola's CEO isn't my favorite... But CEOs usually have an I te se personality, so I'll let my judgment come fro. Results or lack there of.

I'd they can pull off their business model, it's pretty genius. Outsource a good deal of the truck itself so you're not reinventing it from the ground up, and use truck sales to fund the building of the stations. Big orders mean you get a station on your route first. They plan on being more of an energy company than a truck company. So when I gauge their market cap, I keep in mind they're an energy company first, truck second.

To me this is all exciting. It creates energy indepence, which should relieve our foreign policy, it's cleaner for the environment, and it had the potential to be cheaper than oil. If we get these new energy mixed lower than the equivalent of 30 per barrel, it's a win in price.