posted on Jun, 28 2020 @ 09:59 AM
link
If any of this is true then it is way past the point of voting on one man no matter how good you precive he is .
I honestly Don't know if any man Trump or Biden could change the course of events even if they really wanted to .

Just what power do they really have ? Just who is pulling the strings of the Puppets .
I noticed One HUGE thing about Trumps style . He tweets he gets on tv and rants ( Looting starts shooting starts -

NO mask No mask the Virus no dig deal we have everything under control doing great .All Gungho

No new stim package No way Ill sign a thing untill my demands are met .

Next thing you see is him back on tv saying ( we are working on police reform ( looking like he has soap in his mouth .

Next thing yous see is him on tv Saying we are working as fast as we can on a new stim again looking like he has soap in his mouth .

Total about face in all thous things . But not because he changed his mind because someone who he does fear told him tone it down NOW .
Even ten years agaio every one here all agreed the President has no real power now But some how Obama first and Trump now will save us .

Way to late we cant even save our self's as we bicker over one man . Or one party when BOTH have the same GOAL .

originally posted by: ErEhWoN
a reply to: Ohanka


If the left continues as is, with it’s vitriolic racial hatred

Can you provide some examples of Dems using this 'vitriolic racial hatred'?


Go read your own stuff.

That one's not quite fair. We know very well what danger it poses. We did warn about it long ago, but we were laughed at. Sometimes, the only way the stupid kid learns that the pot is hot is feel that burn for themselves.

Now we laugh because they didn't listen when they were warned and they're getting burned ... just like we were.

He did offer them a reasonably fair trade on the immigration deal.

The one that's killing me is the police reform bill. Sen. Scott's bill has about 80 to 85% of what Democrats say they want in it, and they killed it because they didn't want Trump's name on anything.

originally posted by: rom12345
I personally don't care who thinks they are in charge.
as long as they f*ck off and leave me alone.

That's the problem -- the progressive regime will run everyone's lives. It won't leave anyone alone. They think they're the elites and that entitles them to tell you what to do and how.

posted on Jun, 28 2020 @ 10:09 AM
link
United States Of America was Much much smarter then any Dictatorship .
They let us protest- grip and mone to our hearts content abortion - antiabortion - Gay marriage no gay marriage .
The rights of ( pick a group the more created the more distracted we are )

Just why do you think the police were TOLD to stand down for 3 days while looters looted ?
You really believe the Democrats could have done this country wide without the republicans consent ?

Your not an outlier. You are a conservative. Conservatives would rather have you believe your vote doesn't count, than to care and vote.

Hmmmm... you seem to have a problem understanding choice and free will. And conservatives!!! (Hint: Conservatives want me to vote for their candidate... duh!)

I choose to reject the choices they offer and to create my own choice. That's why I'm voting ErEhWoN for prez and Kellyanne Conaway for your vice prez...

posted on Jun, 28 2020 @ 10:14 AM
link
the Deep State & Globalists Elites will clean out the NWO-Corporatist Nest soon enough--- after they have Gelded the Office of POTUS they will install their own minions to the Legislative Branch, instead of allowing the Radical Lefties (such as AOC/Pelosi/et al) to remain in office …

What I wonder about what Biden will do if he wins is just how long it will take for all the criminal charges to be leveled against Trump that were avoided because he was the sitting potus.

posted on Jun, 28 2020 @ 10:22 AM
link
Nothing so stop wondering .
Biden wins he has got to many other things to deal with other then being Political police .
If any charges are brought it would be not be done the same way It was not done the last 10 times .

originally posted by: Boadicea
a reply to: ketsuko

"When life gives you lemons squirt it in peoples eyes"

It's rather like the old quote from the priest.

posted on Jun, 28 2020 @ 10:36 AM
link
"Vote Trump, or the covid infected nazi gangsters will burn down your business and homes, kidnap your children for toys and blood, then Bill Gates will stick a fake shot in your arm with your new tracking currency, while China and Russia invade!"

He's got one hell of a campaign manager.

Start by owning it and not blaming others for your own words and deeds!!!

Oh boo hoo. There are plenty of ways and means to express oneself. Where there's a will there's a way. If everyone just shut up because someone won't like what they say, then no one would say anything! Someone has something crappy to say about everyone and anyone. No matter what you say or do. So that's just a pathetic copout.

posted on Jun, 28 2020 @ 10:57 AM
link
I still feel its important to say that these people arent actually liberals. Id go so far as to say they arent really part of the political spectrum at all, they just use political ideology and its adherents like skin-suits and puppets.

So much is going on, and for so long, that its difficult to really have a conversation about it with someone(s) that might have only started questioning things this year.

At its core, I believe we are seeing the rise of corporatism from capitalism. And while the colloquial "left" is busy fighting things by doing those very things, and the colloquial "right" is busy yammering about commies and marxists.. All the real moves are being made just out of the corner of our eyes.

Indoctrination of our children in schools for decades, zoning laws, robotics, vaccines..

Keep an eye on your local city council for any "sustainable development goal" language. While most are only focused on national politics, thats where moves are being made on that front.

Get self-sufficient in your home, to the best of your ability. The plan is to eliminate any and all business that arent massive corporations, or that wont tow the line. This will be used to control the population.

Be patient with others. Seriously. Its big business to get two social groups to fight, like rubbing two ants together. Lots of profit to be had, and the further divided they are.. The easier it is to tip toe towards totalitarianism.

With Trump, I see a possibility of stalling these plans. At the very least, he is a competing Brand in the corporatist market. I really dont believe he is The Answer to Everything though.

We need to be that Answer for ourselves. We literally have the resources and technology to do it, right here and now, today.

Else, corporate technofascists will be building a system that simply plops out skin-suit "activists/footsoldiers" and turns the rest of us into bags of meat that do nothing but consume what we are told, think what we are told, and behave like we are told.

originally posted by: 727Sky
Even when Biden had a brain he did not use it wisely 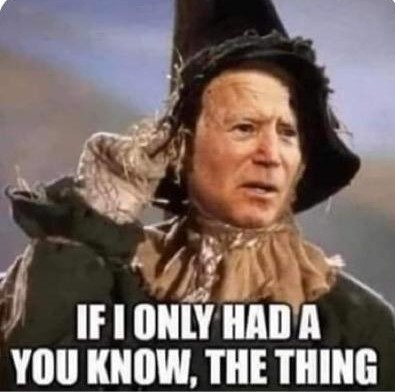 The ONLY way to stop this madness is one side winning the argument and unfortunately this can only be done with a war with the dead filling the streets. This is what humans understand....pain and suffering.

It has been going on for approx. 150 years and it's gotten worse as a nation.

Too many chiefs and not enough Indians.