I get the impression it's ironic, more probably, looking at the ages of this lot, they grew up watching Ben10 and grandpa Max has subliminally taught them that a good Hawaiian shirt is the height of fashion.

From what i gather, 90% of it is all satire. The other 10% are the people who are pretty scary meeting privately under the boogaloo banner.

But i mean...my whole life i've referred to crappy rehash using the Electric Boogaloo thing. There was this kid I didn't like in high school. Some time after graduating i had run into his younger brother, who i immediately didn't like. When I found out they were brothers i said "Oh, its Justin Electric Boogaloo". Which created a bit of a ruckus.

But my point is, its a fairly old film reference that is always used sarcastically. That is what threw me to begin with. When you see the meme pages, it doesn't match up with the headlines of lunatics.

Yeah, I totally get that.

These days though, it seems that one person's joke is another person's grave insult.

A few years back, a couple of 1 percent bike clubs went through a phase of ironically wearing these shirts.

The main thing seems to be winding up the anti fa types from what I can see, that and 2nd amendment support.

But are YOU convinced the B.Boys ARE NOT EITHER?? ALL OF THEM?! (That they don't want wanton bloodshed)

United we stand and divided we fall!! 😞

So, if you think shooting our son's or daughter is worth your ideology, you will have more than you can chew on, that's not a threat, that's a promise.

With that being said, I'm with the member who is willing to DEFEND the citizens and not burn down their businesses and possibly establish a 2nd tier of protection when the good cops (because their still out there) get out numbered to PROTECT the citizens from hate groups that want NOTHING MORE THAN to "kill, steal and destroy" instead of " providing life more abundantly" (the only 2 camps in this world)

All wars starts with deception.

How can we be absolutely sure none of these groups have been infiltrated by ANY foreign gov(s)? You can't. Because NONE of us are that high in the food chain. (On here that I know of)

Because WAR is BIG money in the end...right?

Since that is true, a American civil war II will be nothing more than filling the pockets of those who started all of this and we the people of the USA suffer for it.

Foreign gov(s) want NOTHING more than to see us in bitter civil war as they stated many many times before publicly.

American will never fall from without, but only from within.

So I guess you have to decide if it's really worth wanting bloodshed in streets fighting for what you think is the right cause only to find out that is was ultimately for a foreign backed government and hopefully those that are with you aren't a financially backed mercenary group.

It’s almost like you want to respond but you don’t want to actually talk about anything, but your need to try and have the last word forces you to respond with something even more silly than your OP was.

Nobody thinks all boogienights bois are racists, and despite losing reddit and Facebook you still have 4chan. You’ll be okay.

originally posted by: Liquesence
according to most others they are a far right white extremist group intent on causing division, targeted conflict, destabilization and the new civil war.

Your favorite biased news outlets are not "most others."

Should have left them to fantasize about the zombie apocalypse or aliens, now your'e going to use paramilitary groups in the federal government to attack them at random.

Bruh, they call that a self fulfilling prophecy.

BTW these statements they are making clearly violate the law, innocent until proven guilty - making slanderous unproven statements is bad.

One article the DEA arrested the guy for selling steroids, makes sense - bugaloo boi has nothing to do with it and all you are really doing is criminalizing children with active imaginations, you'll have to cancel the military next. Anyone who wants to stop enemies bad.
edit on 27-6-2020 by circuitsports because: (no reason given)

posted on Jun, 27 2020 @ 06:04 PM
link
The liberal socialist left have extreme power with silicon valley, the media, hollyweird, academia. and political figures on their side.

No longer are they the silent minority

With the border open they have physically changed the demographics of many places ,flying these people around giving them special home loans.

When the real citzens wake up to this, it may be too late or it will be one rough civil war.

posted on Jun, 27 2020 @ 06:11 PM
link
All that said, Walmart has been stocking Hawaiian shirts this year as have other clothing stores...coincidence?

Barr, in a memo Friday, said there is evidence that extremists belonging to the far-right "boogaloo" movement and those who identify as antifa, a loosely organized anti-fascist group, are responsible for some of the violence that marred protests across the country. Barr also said some of the extremists may have had some support from foreign entities, although he did not offer evidence.

For those who were so excited when "ANTIFA" was attacked ... I'm sure you're glad now that "the boogaloo" is also now under government attack ... right?


originally posted by: Liquesence
according to most others they are a far right white extremist group intent on causing division, targeted conflict, destabilization and the new civil war.

Your favorite biased news outlets are not "most others."

But most people with sense, who pay attention and aren't far right supremacist apologists, recognize it.

Such as M ilitary Times: Far-right groups like the “Boogaloo” and “O9A” continue to attract troops and veterans

Apparently even the FBI has picked up on it.

But I know you identify with them, and will defend them, as usual.

Their site, their rules. Use a different platform.

I only know what I find in the news?

Are these groups willing to use violence and threats against the general population to push their ideology?

posted on Jun, 27 2020 @ 09:15 PM
link
I've only learned about the Boogaloo movement recently. This thread intrigued me when it made the claim that the movement isn't what the media is making it out to be, but I've just read through the entire thread and have yet to understand what EXACTLY it's about.. anyone care to enlighten me?

Also, does anyone not see the irony in vehemently defending a group like this while simultaneously accusing groups like BLM of being exactly what this is described as?

Boogaloo is the perfect media target. The US has gone from HBO to NetFlix and now we are the WB.

It does seem like popular culture is being hijacked by trolls. I've heard of the chans running trolls that get people to do outrageous nonsense. A lot of the most absurd social media stuff pushed by influencers has roots there.

And it has real world implications. The "ok" symbol being considered racist begins there...and lo and behold not only do morons believe it, some racist folks take it up as an actual symbol.

They speak it into reality with a sneer and a chuckle.

they are a racist hate group and apparently so are you.

You know I was content with letting this thread fizzle out as I felt I accomplished what I set out to do.

What you just posted is ignorant.

But you know what? Entertain me. Prove to me that I'm a racist.

originally posted by: fencesitter85
What a bunch of crying pansy Karens.
Their site, their rules. Use a different platform. 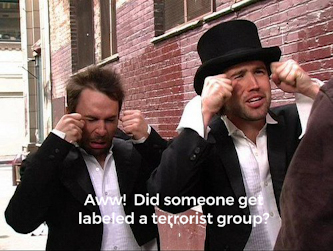