First of all , the thread title comes directly from the link in the video from Kenya

A look at the recent locust news from China to India to Pakistan and Afghan , and Central Asia , across the middle East all the way to west Africa shows devastation , the like of which has not been seen for generations .

It certainly spells a food disaster , it's very very serious says the locust hunter from the video .
Not only arable crops are destroyed but these locusts are eating all the wild bushland which are used for livestock pasture. No animals no milk no meat no crops no wild foods .

And adding to this palpable sense of doom , these already multiplied by orders of magnitude numbers of locusts , already well into the billions are hatching , yet again . The footage contains a rare scene , hoppers emerging from eggs , en masse .

Over in Pakistan and India the monsoon season is on them and in July , with the rains , eggs will be laid there too. In twenty five countries at least , divinely sanctioned doom is brewing up. God's vast army is about to invade the cities too .

Some people , love doom , don't ask why . And this is real and proper doom brewing up . Some people don't like it , understandably .

Ask this one guy who's seeing it first hand , take a look at what leads him to say , " we re not scared of Corona , but what locusts are doing to us is far far worse , we re ruined . "

posted on Jun, 25 2020 @ 06:26 PM
link
a reply to: DoctorBluechip
Could be the horsemen of Revelations riding forth pestilence and disease and death followed.

or it could be doomporn.

And the seventh angel sounded; and there were great voices in heaven, saying, The kingdoms of this world are become the kingdoms of our Lord, and of his Christ; and he shall reign for ever and ever.

16 And the four and twenty elders, which sat before God on their seats, fell upon their faces, and worshipped God,

17 Saying, We give thee thanks, O Lord God Almighty, which art, and wast, and art to come; because thou hast taken to thee thy great power, and hast reigned.

18 And the nations were angry, and thy wrath is come, and the time of the dead, that they should be judged, and that thou shouldest give reward unto thy servants the prophets, and to the saints, and them that fear thy name, small and great; and shouldest destroy them which destroy the earth.

19 And the temple of God was opened in heaven, and there was seen in his temple the ark of his testament: and there were lightnings, and voices, and thunderings, and an earthquake, and great hail.

I don't understand why they don't catch them and eat them???

Their very worried about the crops but a replacement for that food is literally right in front of them.

posted on Jun, 25 2020 @ 07:22 PM
link
a reply to: DoctorBluechip
I personalty don't think we are there yet we have the Ezekiel wars to happen first and Jerusalem is not living in safety with no walls.

We can't use butterfly nets? We to use them to catch crazy people./SARC

posted on Jun, 25 2020 @ 08:25 PM
link
So we're sending rockets to space but we can't deal with some insects here on Earth? Can't they just spray them instead of sitting and wait? They're already in South America 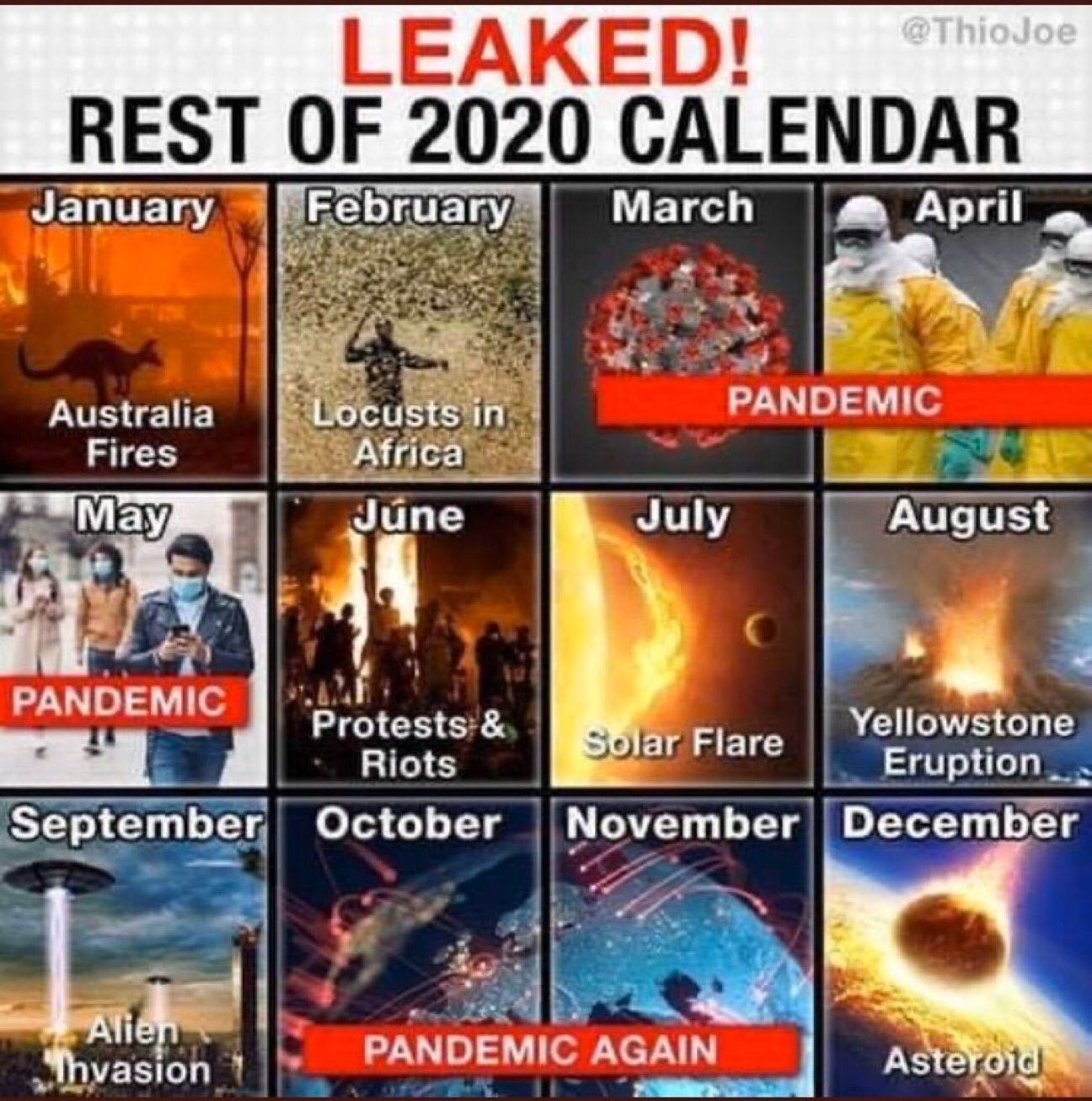 If Yellowstone blows the pandemic will be the least of our problems.

posted on Jun, 25 2020 @ 09:15 PM
link
I'd be more worried about solar flare. We go back Stone age. No electricity for long long time. All grid/satellite fry. All start to panic.

But you can catch and preserve enough to eat.

posted on Jun, 25 2020 @ 10:27 PM
link
These are cyclical events have precedent in history not even ancient. Also, how come nobody just make flamethrower drones that are basically mini flying gasoline tankers with a torch?? Couldn't we clear a bunch of fliers by simply deploying hundreds of these drones as the swarms are identified?? Perhaps even a corrosive mist after people are warned to stay indoors while treatment is ongoing??


I have always believed we have not invested enough in utilising existing and developing new caustic and corrosive agents in weaponized form. Use it on bugs, machines, aliens with hardened exteriors, maybe even as a standard deployment for clearing out invisible targets (targets with as active camouflage).

Let's acid these fellas out the sky and let the ground creatures slow their March across lands.

posted on Jun, 26 2020 @ 01:08 AM
link
For all of you military tech smarties, Is it at possible to use the Raytheon Active Denial System as a way to control and or abate the swarms of locust? I know they say its non-lethal but I'm sure they can crank up the heat and fry these little buggers. I'm curious if Raytheon has ever researched its use outside of military defense/offense and potential agricultural use.

How about just skip all that and just go straight to the asteroid ...

posted on Jun, 26 2020 @ 05:18 AM
link
I don't think people realise the actual size of these locust swarms, the ideas presented in this thread so far would be like spitting a mouthful of water at a volcanic eruption.
edit on 26-6-2020 by Osirisvset because: (no reason given)


Latest Almanac forecast...
How about just skip all that and just go straight to the asteroid ...


Who needs to loose any sleep over finding new 'entertainment' outlets during this lock down economic disaster/pandemic when The Farmers Almanac offers FOR FREE the 'super realistic rides of end times'? Disney and Universal Studios may be in trouble.
edit on 26-6-2020 by vethumanbeing because: (no reason given)

originally posted by: Alchemst7
For all of you military tech smarties, Is it at possible to use the Raytheon Active Denial System as a way to control and or abate the swarms of locust? I know they say its non-lethal but I'm sure they can crank up the heat and fry these little buggers. I'm curious if Raytheon has ever researched its use outside of military defense/offense and potential agricultural use.

That may get the same reaction with locusts as it does with humans in that they may want to leave the area of the beam. To kill them would take a more powerful unit. That one is 200kW in, 100 kW of 95 GHz radiation out (and presumably another 100 kW of wasted thermal energy which is like 80 electric space heaters, I didn't see in that video how they would get rid of that much waste heat, but that would be a bigger problem as you scale up the power.

For cooking the locusts, it may actually work better on the same frequency microwave ovens use but that provides some regulatory challenges given things like standards for the tiny amount of microwaves microwave ovens are allowed to leak, because they can cause cataracts in addition to cooking plants and animals.

The Food and Agriculture Organisation (FAO) of the United Nations is looking for ways to use search drones to find the locusts, and destroy drones to attack them with pesticides:


In the field, UAVs could be used to automatically collect high-resolution imagery of green, vegetated areas potentially affected by locusts. Controlled by a rugged, hand-held tablet, the UAV would follow a pre-programmed flight path, covering a 100 kilometre survey radius.

After the UAV finishes its flight, survey teams would be able to use the data to identify areas that seem most likely to harbour locusts, allowing them to travel directly to suspicious locations. Once the team reaches such an area, the UAV could be launched to hover overhead and identify other, nearby locust infestations that may require treatment. A separate control UAV could then be used to administer pesticides directly onto the locust concentrations. UAVs could also be used to check for locusts in areas that are insecure or cannot be accessed by ground teams.

The range of the locusts is huge and the drones would need extended range too, more than some available drones have:

the insects annually reproduce, concentrate and then form swarms that can move up to 150 kilometres per day in search of food. These swarms are able to migrate across long distances, and can even jump from continent to continent. A single desert locust swarm the size of Brussels could consume Belgium's entire food supply in a single day.

I didn't know they could move 150 km in one day until now.

an UAV needs to be designed with sufficient endurance to cover at least 100 kilometres in one flight, while carrying optical sensors that can accurately differentiate green annual vegetation from bare ground. The drone system should then be able to process and output these results while in the field. Due to battery and spare parts limitations in developing countries, the UAV should be solar powered, and consist of robust yet simple parts that are easily available in local markets.

The UAV should also be able to accurately detect patches or concentrations of locusts within a single site on a reliable basis. A control UAV will need to be able to balance a potentially bulky pesticide payload with a long flight time, in order to treat the largest number of locust infestations within the greatest amount of area.


That article is 4 years old, I wonder if they made any progress on the use of UAVs to control locusts.

edit on 2020627 by Arbitrageur because: clarification