Thanks, man, you too. I'm sure we'll run into each other again, maybe with less assholes.

Nah, just leave crap be, people know better. Kinda like black or Asian Santa -- we know lily-white Dutch Sinterklaas was the root visual origin of American Santa, but it doesn't stop blacks (or Asians, or anyone else) from tailoring him to reflect them visually, so how come blackwashing something/someone is ok, but whitewashing is oppression?

These whiny dumbasses need to grow up, the world does not revolve around toddlers having temper tantrums over dumb crap.

I think that they are nuts when they think Jesus was about race.

I like the Bleaster Bunny and the Fwairy Godmother. Two of my favorite ethnic made up people, just like White Jesus.

posted on Jun, 23 2020 @ 01:26 PM
link
I am not a church going person, but I would defend my wife’s parish from these terrorists.
I have enough ammo to make a pretty long siege, longer then they could go without Mom’s cookies and milk in her basement.

That is sounding pretty much like domestic terrorism to me. Time put a lid on this can of worms.

What skin colour does God have ?

As Jesus is the Son Of God he may have taken his fathers genes to determine his skin colour.

originally posted by: RazorV66
I am not a church going person, but I would defend my wife’s parish from these terrorists.
I have enough ammo to make a pretty long siege, longer then they could go without Mom’s cookies and milk Mum-Mums in her basement.

FTFY. They're not old enough for real cookies yet, they get the baby biscuits still.

originally posted by: 99problems99
I love how some of you guys act like Jesus isnt on their list because Shaun King. lol

No, I'm taking this sooper seriously, this is the beginnings of a long and protracted race war and I'm prepared. I have ammo stocked up (learned this from another poster above) and I'm ready to go to town to protect White Jesus. Me and Derek Vinyard are ready to curb stomp anyone who gets in our way.

"All murals and stained glass windows of white Jesus, and his European mother, and their white friends should also come down.

They are a gross form white supremacy.

Jesus doesn't like idols, which is what the statues and paintings of him are. I don't have a problem with tearing them down as long as they tear everyone of them down.

How can the Human Race not be racist, after all it is called the Human Race. I prefer to consider myself by my oldest ancestry which would be my Neanderthal genetic ancestors. I have no clue what color neanderthals were....but I do know I am a dark Finn, so I am way tanner than the white Finns. Evidently I do not have any black in me, but do have a little Inuit or Eskimo...total 1.7 percent....I am cold hearted, I like Winter.

posted on Jun, 23 2020 @ 01:44 PM
link
Well, if you go strictly by what it says in the New Testament and not interpretations from other various dubious sources, Jesus was a kind of "shapeshifter.". He appeared at different times as completely different people, including sometimes as a child. He appeared after his reserrection as a completely unrecognizable stranger who had to prove who he was by showing the apostle Thomas his unhealed wounds.

He sort of took on the attributes of a "spirit" which could move from person to person. Kind of like a demon possession, actually. The evangelicals have always embraced this notion, and accepted that sometimes people can be filled with the spirit of the Lord and essentially serve as a proxy for the boss himself. It has unfortunately allowed them to be hoodwinked by crooks, but the basis of their beliefs is right there in the NT.

So probably the most accurate Jesus depiction would be of several different people of varying ethnicities, ages, and even sexes. Rather than destroy an old depiction, they should be adding to it to more accurately follow the narrative.
edit on 23-6-2020 by Blue Shift because: (no reason given)

posted on Jun, 23 2020 @ 01:45 PM
link
" All Artistic versions of Jesus Matter "....... He was probably more brown skinned, but how people interpret Jesus is a personal thing. Absolutely No moral high-ground destroying / vandalizing Beautiful works of art that are spiritually meaningful to others. It's a form of Terrorism and should be treated as such. 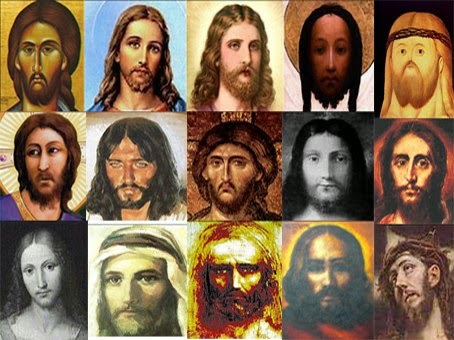