You try to explain a complicated world with big abstract terms that not only will not help in the discussion, in solving this mess, or anything really, but it gives you this nice feeling of self-rightousness, as if you have an enemy who is everything wrong and you are good just for having a justification to hate "them".
Sometimes ignorance comes with a feeling of superior knowledge.

And Yes she used the word marxist, even a trained marxist, but we both don't really know what she actually meant with that.
You jump to conclusions probably something like "derp... Soros...! She wants to destroy America!"
I say she probably meant her inclusive style of leadership.
If that's ignorant and you're enlightened... I'm pretty happy about where I stand

edit on 24-6-2020 by Peeple because: rambling on the internet in the morning

posted on Jun, 24 2020 @ 02:01 AM
link
Why don't they just go make their own Jesus statues... color them purple if they like....
The principle of Jesus transcends material objects and there is not a person on this planet that knows what color his skin was.


That is human wishful thinking and not science.
Humans are animals, herd animals to be precise. The best number to have a functioning and peaceful existence in any group is no higher than 150.
Anything higher than that and new groups will form. It's hardwired in us.
Nothing to do with frigging colour of skin or red hair etc, those are merely visible markers of a different culture [or the same] as yours. The markers do not count if you have people in your small group that all have the same culture.

Point is that you think we 'could' overcome all these hard wired traits by forcing ourselves to go against nature.
This is exactly why we are in this predicament.
Here are examples of new group forming when there is a large body available, the internet.
No colour, no names and yet...different social networks with people thinking those on the other ones are assholes or stupid.

We can't deal with big, our brain aren't made for that, we will always, always forever and ever form small groups and be hateful towards the others. Because here it is in short again: Colour doesn't matter, it's thoughts, beliefs and culture that we belong to. There are so many different black people who don't just want to have colour in common with those lefty losers. It's frankly insulting.

And even if you'd make all humans have the same culture and belief and make them all the same colour by interbreeding and cut all their hair short and put them all in a sack, groups will still form.
Mostly it's those that use their brains and do research and critical thinking vs hippies who have no idea about the real world vs perpetual con men, criminals vs murderers etc.

It starts with those groups surely and then gets refined from there. And nobody can do anything about it apart from accepting that we are NOT all the same by a longshot and the funny thing is if you are in the Hippy group, would you let a racist and his family in?

It always made me grit my teeth/roll my eyes (depending on how bad of a mood I was in already) when I saw pictures of a blond, extremely European Jesus. He was Jewish. Any portrayals (and that could be argued as well on the "no graven images" front) should show a semitic appearance.

Destroy stuff because of it? Absolutely not. But it was very stupid and maybe racist to portray Him as white.
edit on 24-6-2020 by drussell41 because: (no reason given)

I'm telling you what I'm seeing from people who have lived experiences of similar revolutions in their own countries.

Jews who saw it in Russia, Cubans, Venezuelans ... they all say they see the warning signs. All the red flags are there. Where we are headed down this path of tearing down statues, demonizing history and replacing it with a new version (1619 Project) leads nowhere good.

They all say they also saw the same complacency, "Oh, it can't happen here." And that's a good deal of the reason why it does.

I would not let any politicians or pedophiles in nether, see my point? x LoL

I would not be in charge of who we let in and who we did not.

Like i have already tried to explain, its not race war, its class war.

As to us being animals, which may very well be the case, we are still the same animal, no matter what colour of skin or fur happens to take.

Humans adapt and overcome, bend and shape our environment to suit our purpose and will, there is nothing that we cannot do once we set our minds to achieving such to within rhyme and reason.

That's just how we roll, we went against nature as soon as we began to start to bend it to our will.
edit on 24-6-2020 by andy06shake because: (no reason given)

originally posted by: ketsuko
Pshhh, this is ATS. We're buried by Google.

No one knows we're giving Talcum X there the time of day.

I have a feeling he does.

The white guy who said all this also said he is going to move to make all white churches black property.

originally posted by: Phage
Lovely expression that, "dark" age. Do you really want to idealize the Roman Empire? With slaves and Caligula and stuff? Make Rome Great Again?

originally posted by: ketsuko
Oh, really? Who is he?

He's the guy surfing the net right now looking to see who he hooked and getting all chubbed up about it.

White Christians are a group none come to the defense of in liberal media circles. The narrative keeps going further. It’s white people, and Christian people that are the source of everyone else’s problems... that’s what they believe. They have institutions that teach this. Take any class on race and gender studies and it will turn into a villifying of white patriarchy and Christian values.

Just that what you are fearing is the youth and a minority releasing some pent up frustration after Corona and all dreaming of a revolution, they don't even got a plan what should replace society or what they're fighting for, they're just against a lot of things that might be worthy to discuss.
But really only very few individuals got it in them to kill because of that and they're not limited to one side, like the McMichaels.
And I said that before the system might be broken but it's set up and working to protect those who are the backbone of the capitalistic might it represents. That is suburbia USA, that's the business people, the entrepreneurs small and big, the workbench "hardware"... and for sure not some useless loudmouth art, or social studies person who hasn't contributed a single dollar in their life.

Chill. Be a good adult "aha yes we hear you. But the reality is..." And let them figure it out. Really nobody has anything that's worth fighting for, they just kick and scream.
It's not a revolution. Nobody expects you to let them destroy everything. There are laws for that.
It's a sign of a healthy free society. If it weren't the scenes would have been very different. There wasn't any real confrontation that was truly worrying.
In a country that is filled to the brim with guns if they were serious you'd have noticed by now.

Sorry if that came across preaching. Not my intention. I totally understand your worries.
But it's people like you who can not fall prey for fear, you can express yourself, you can think, you can explain why you think as you do...
Stay strong. Keep calm.

posted on Jun, 24 2020 @ 09:12 AM
link
a reply to: andy06shake
Do a search on images of Jesus in different countries. China for example has an oriental looking Jesus.
What matters more, His depiction or his message?

originally posted by: Beowolfs
What matters more, His depiction or his message?

His depiction, duh. He should always look like Jim Caviezel, prior to getting smacked around in The Bashin' of the Christ of course.

People need to open their eyes and realize what BLM truly represent. Next they'll turn their attention to his mother, since she obviously wasn't white either.

Let them desecrate the church. Perhaps that what is needed for the masses to have an awakening.

originally posted by: Beowolfs
People need to open their eyes and realize what BLM truly represent. Next they'll turn their attention to his mother, since she obviously wasn't white either.

Or, they could just realize the guy who said this is white and is f****** with you.

Of coarse he is. However, a large percentage of the population takes those writings as gospel (Pun intended).
Nothing angers people more than questioning their political perspectives or religion.

Tear down those statues! They can always be replaced but the damage done to the ideology of the current BLM movement will be irreparable.

originally posted by: Beowolfs
However, a large percentage of the population takes those writings as gospel (Pun intended).

The depiction in one Serbian church is brown haired and brown eyed.

If he wants a black Jesus, 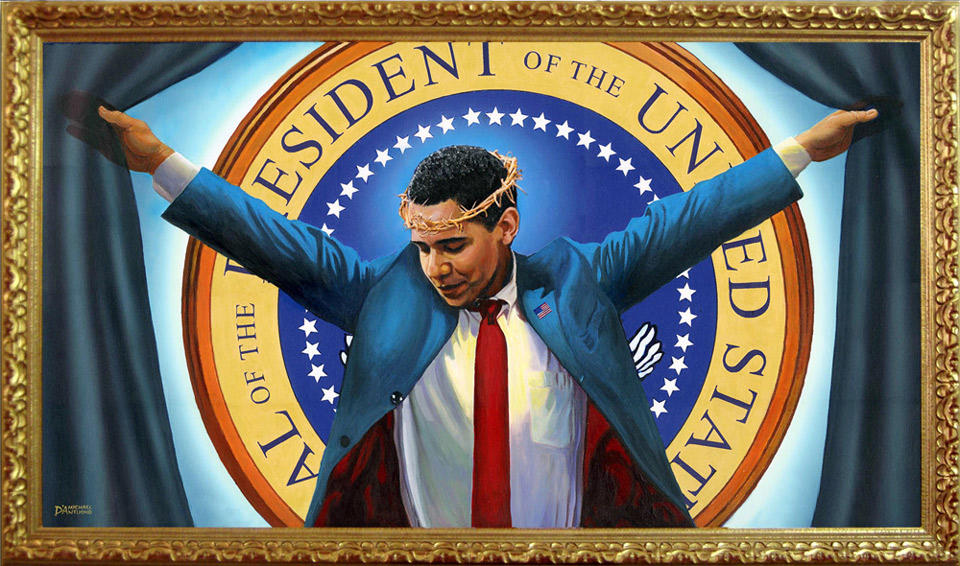 There's always this one.