Facebook on Friday removed a post by Donald Trump that featured a doctored version of a 2019 viral video that shows two toddlers.

The original video, which went viral last year, shows a Black child and white child running toward each other and embracing. But the altered version posted by Trump to Twitter and Facebook on Thursday is overlaid with a fake CNN graphic and edited to suggest news footage of the white child chasing the terrified Black child.

On Thursday, Twitter slapped the video with a “manipulated media” label.

The post is still sitting on his twitter page apparently. It's just being marked as 'manipulated media'. Uncertain whether it's been removed since then? I'd assume his social media folk have gotten onto it by now? 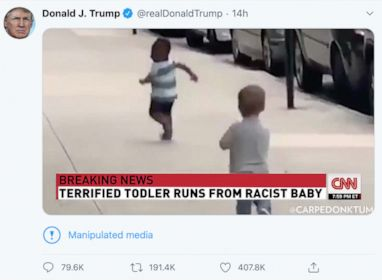 
The parents of these kids have even spoken out of the manipulated post.

It seems like we constantly hear about how people unnecessarily bring race into everything, or how the media manipulates stories on here. Yet here we are, another example from the president doing that exact thing.

Where are his social media consultants? The guy's a millionaire? He has all the advisors he could want? So how does he still manage to post manipulated media like this? Classy.

Do you want to make that comment again Blunt? Or are we going to be conveniently silent this time?

CNN is very fake news, the left is racist.

Your passive aggressive racism is showing.

There we are. I shouldn't of had to prompt you now should I?

I accidentally double posted in the last thread. My bad.

Well since you always see what you want to see I might as well make it easy for you.

Why would there have to be when it's on topic to what the Trump admin posted?


It's just being marked as 'manipulated media'.

Is CNN responsible for Trump posting a manipulated CNN video?

What happened to self-responsibility I wonder Sublime. Seems like it's the exception for ol' Trump here.

Well since you always see what you want to see

All I see is what you write Blunt. What else am I suppose to see? Black people = bad, right?

I'm glad you did what I prompted you to do.


Is CNN responsible for Trump posting a manipulated CNN video?

Every CNN video is manipulated.

Shockingly, that wasn't removed for being misleading and made up.

originally posted by: 99problems99
a reply to: Southern Guardian

For it to be accurate, we'd have to repost the part you snipped in a bunch of other threads. Then a few days from now you issue a retraction in this thread, but it never gets corrected in any of the other threads, so everyone who saw it in the other threads thinks SG is a racist.

The truth doesn’t matter,,
It’s the implied truth that matters...

Get with the program.