posted on Jun, 18 2020 @ 07:34 PM
link
"In season two, each episode will center around a specific case or aspect of the modern UAP phenomenon and follow the credible team of connected investigators including former military intelligence official and Special Agent In-Charge, Luis Elizondo, and former Deputy Assistant Secretary of Defense and Intelligence, Chris Mellon.

The pair will continue to divulge what the U.S. government (and other governments) know about these bizarre craft, hear additional firsthand eyewitness accounts of UAP sightings from military and civilian personnel, and share additional fact-based insight and information about these craft in an effort to produce tangible evidence and build the most indisputable case for the existence and threat of UAP ever assembled."

I really wish the sighting data from season ones trip to Europe was available somewhere.

Luis got a real job?

So, UFO Hunters all over again? What ever happened to Bill Barnes, anyway?

posted on Jun, 19 2020 @ 04:10 PM
link
i don't understand the point of this show if it is turning into just another case of the week UFO thing. At least the first season felt like it was building up to something.

I think the network got upset about one of the last shows where they were going to do a piece on Stephen Greer's alien body mummy-thing that he was swearing was real and of course was total B.S.
Greer has really done a good job of making the ufo world as credible as Bigfoot.

I thought it was a good show anyways. They tried. Bill was a bit too enthusiastic and letting confirmation bias really get him in some spots and some of the evidence they spent long segments on were pathetic. Like the guy who had the ufo video and it was just a camcorder filming a plane and zig-zagging around.
One time they actually showed how a lens will create the effect of those ufo ships around the space tether. They demonstrated it exactly but Bill was like "cool but our video is probably still alien craft".
He needed to stop saying the word "craft" every 10 seconds.

And then an old guy pointed out an aluminum alloy was the "memory metal" he saw his grandfather show him at Roswell and somehow Bill was like "cool but the Roswell metal is still alien metal"….

But for what they had to work with they did some good work. I always hoped they would continue that show.

Same with James Fox the "Out of the Blue" and "I know What I Saw" guy who was supposed to do a more recent documentary?
As usual a lot of the intrigue of those docs are weather the person being interviewed is telling the truth or completely making crap up.
The Phoenix Lights one was good because of how many witnesses there were.

Anyways, all this stuff was pre-iphone days. The fact that there are not good ufo videos everywhere is really suspicious to me.


OH - yes, James Fox was involved with that show (forgot the name) that was a total work. They would show them running around fields at night then cut to fake footage of bad CGI lights and they would be like "It's here, it's right here, oh my god!!" Holy crap that was bad. So yeah, that might have killed the whole thing right there.

posted on Jun, 25 2020 @ 12:04 PM
link
About time. I still think they should clean up all the loose ends from last season. Put Dick West and all those guys who have come forward from the Princeton and Nimitz on the show and let them talk it out in front of us and clear up all their ATFLIR arguments. I will even pay West’ medical bills.

UFO Hunters was cancelled because of their Dulce episode. They got too close to the truth and so the sponsors backed out overnight.

And that old guys memory metal was fake, not the original Roswell thing.

We think we found something! Dramatic music--cut to commercial. Come back, nothing.

The episode with the Italians was horrendous.....

The most one can hope from this season is the release of a new UAP video or a New York Times Article.... but then again it is 2020...seems like anything can happen this year

HC has always been a type of propaganda outlet. In most cases like AA I thoroughly enjoy the propaganda.

Where they lost me recently was during the lockdown with the frequent messages to "remain apart" and "remain locked down" and all the other messages from our overlords.

Yes it was very irresponsible of them to try to keep you off a ventilator.

Oh you will be cheering again soon Cellty.
My popcorn is by my side.

10+ years ago I spent time on a ventilator. It was kind of psychelic to be sure.

originally posted by: IMSAM
CAn i get back my 42 minutes? This was a great load of crapola

It's time we opened our eyes and addressed exactly what's going on.

Sorry, Big Lou, my eyes were already closing by the time the deep-throated pre-credits waffle was over.

Come back, Bill Birnes! At least 'UFO Hunters' always boasted a resident sceptic on the team to rein in the kinds of ridiculous excesses pontificated by Zondo and the Mellon Man.

originally posted by: Macenroe82
a reply to: Planetarian

I really wish the sighting data from season ones trip to Europe was available somewhere.

Well I can certainly point you to right place to look for one of the files we saw on Zondo's laptop just after they left the UFO Italia Conference. 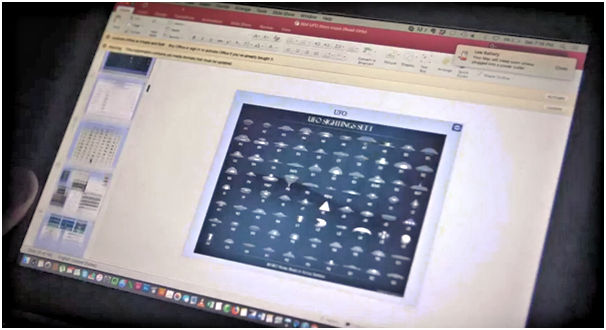 Just take a look at JasonArt. A website advertising models of UFOs.

Did Elizondo actually investigate UFOs? Was AATIP even a thing? He seems unable to tell his AAWSAP from his elbow. He told the Italians that there were photographs and hundreds of witnesses to the 1952 UFO flap. There are no photos and hardly any eye witnesses at all of the events.

Not only that Large Lue was touting his own shipping business around town at the time he was supposedly heading up AATIP. Never Ship Empty posted on Jul, 12 2020 @ 01:17 PM
link
I love it on these shows when someone says a scary or shocking comment like aliens, ufos ,monsters , ect and the camera zooms in for surprised and shocked facial expressions...omg!! 😮 😲 😂

Then you would of loved the skinwalker series