It would be nice if ATS would gather our content and make it available to us in a file we can download upon request.

We can’t even see what threads we’ve given flags to or what posts we have given a star to. And the mods don’t even get paid!

No disrespect to ATS owners/staff or anything, I just wouldn’t count on it. That’s why I said something now so users could be proactive and get a head start. Certain threads must be preserved for the good of mankind.

LOL but you dun had me goin cuz! You a trip!!

originally posted by: Djarums
FWIW I don't think message boards will really exist for much longer.

It would appear independent opinions are not wanted in general. Most websites run my MSM outlets have disabled their comments sections entirely.


That's because when there's a comments section on a news site, their BS gets debunked in real-time. As it stands now, that still happens on social media. People share posts correcting fake news stories. But even that is going to go away shortly.

originally posted by: Annee
Could the site be split?


originally posted by: Annee
Could the site be split?

It seems like TPTB are pushing any dissenting voices to the non-indexed side of the internet, and I honestly don't want to go back there.


originally posted by: Nyiah
They really DO have a reddit already (r/AboveTopSecret) but I still think they need a ATS conspiracy reddit & an ATS OT one to work out well on Reddit.

Everyone should at least consider making an identical Reddit handle strictly for hopping over to the subreddit if/when need be it. I hate Reddit, but I'm considering it.

Not that I'm going to post there with any guarantee but I registered my screenname just in case some scumbag tries to take it like they've done on other sites.

Someone already registered mine.

Which is the reason why ATS has to survive.

I understand that's very easy to say and will be very hard to achieve and being totally honest I have absolutely no suggestions at all how ATS can be saved.

I only hope that the brighter minds and more financially astute than I can come up with some sort of rescue plan.

And again, how in the blue hell is "I refuse to pay for something I use" a political position? Are you suggesting the stereotype of the mooch is a particular partisan bent?

I don't think you are aware of the post I am refereeing to there was one on this thread and another on another thread that specifically referred to my political views.

Now its quite telling that so far in this thread if I just look at you posts you have spent more time calling me out rather than on the discussion at hand.

All I was doing was explaining why in my view its unfair to say the more politically left members left because of a lack of echo chamber. My view based on private conversations with some of these members is very much that they were fed up of the abuse. I know that mods did try to moderate some of this but the truth is, like it or not, I know members who have left due to the abuse they where taking on the boards.

This has led to reduced visitors to the site and an increase in the toxicity of debate both of which I think its fair to describe as being contributing factors to the demise of the site.

originally posted by: FauxMulder
Someone already registered mine.


'Conspiracy theory's never had a very large demographic to begin with.

More generally I'd call it starving artists syndrome, where the artists home is something too esoteric like Van Gogh's Yellow house. Their works sometimes sell for 100's of millions after their deaths but during their lifetimes they are lucky to stay out of the lunatic asylum.

Not that an interactive political platform like the JFK jr, CB, LB "GeorGe" magazine is any saner, but people might spend money to weigh in there..

Some of that is Pythagorean rule I guess can't disclose the inner circle stuff.
You laugh, but an awful lot of ATS content has been disappeared over the years.

Mine is quite similar but with 0's instead of o's.

Hey AM, you got access to any of that big mason money to lend a hand… out?

Thats actually not a bad idea.

This may help a little if you've got some stuff you want to keep and look back on...

How To Archive Your Posts

I remember it was "Above Politics".

I honestly don't think I new it existed for a long time and back when I first joined in 2007 (yes this is my second account) but I was really into all the conspiracy stuff. Was a better way of doing I think but hindsight is a wonderful thing.

I was a lurker for a couple years before joining in 2007.

I agree 100% and I'm probably the most politically posting active member of site Staff. Then again, it can be easily argued that life in general has now become totally infected by the toxicity of politics. Every damn thing now is politically judged by one side or the other, and ATS is just a microcosm of the world so...

I think the point where the writing was clearly on the wall, looking back, was when a website dedicated to fiber arts, of all things, threw down a partisan gauntlet 2 years ago and experienced a great purge not based on "We will remain a site where politics aren't discussed" but rather "We will become a site where only one side of politics is permitted and anyone who argues for the other side will be booted from this site." Fiber arts knitting, crocheting, spinning, weaving... fiber arts... a partisan honeypot developed from possibly the least politically connected activity imaginable.

Holy God, even the fly tying forums I used to frequent as a reader have managed to see most of their activity diminish to nearly nothing. Somebody last year on one of the forums posted an awesome tie he'd done of a classic salmon pattern called The Barron. 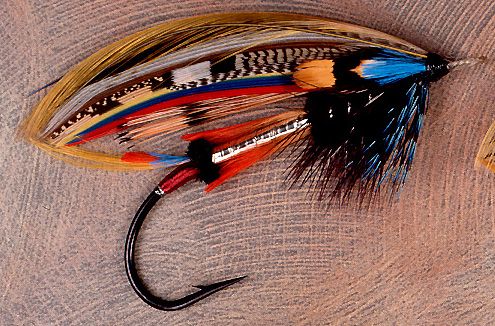 They had to remove the thread because people started talking crap about the name of the fly, citing Barron Trump and horrible, horrible comments were made. The tyer left the forum over it after appologizing for the audacity of tying a classic pattern named the same as the POTUS' youngest child.
The Alaskan outdoor board Alaska Outdoor Journal, TOTALLY apolitical website that used to provide daily sportsman updates for fishing in Alaska, was shut down by the webmaster several years ago because he was receiving death threats from the ecowarrior crowd because he wasn't taking a hard nose position against Pebble Mine while receiving legal takedown threats from the commercial fishing industry because he was pointing out how many millions of salmon they were taking while resident subsistance and sport fishermen were seeing our limits redused and our seasons slashed over "too few salmon." He shut the site down and it was over political bullying and Bullsh*ttery entirely.

IMO ATS isn't the only thing that likely isn't going to come back from this nonsense. I personally am not sure society itself comes back from this crap.


Thats actually not a bad idea.

Except when you make that nick, be prepared to be banned on many other subs because...reasons.