The same way that anyone can claim to be a Boogaloo supporter.

The whole Boogaloo thing wasn't about starting or provoking civil war. It was in reaction to the possibility of civil war due to actions of extremist lefties and the government threatening to take away people's constitutional rights.

What I think is happening is that a bunch of idiots are coopting the boogaloo meme and the media is trying to create a boogie man(no pun intended) out out it.

I started having my suspicions when the media started trying to portray the Boogaloo as a white nationalist/supremacist movement.

I know that's not the case. As I've stated before, I'm one of the guys who shares the memes and cracks the jokes, and is serious about doing my part to protect our constitutional rights and fight against tyranny. I have a lot of acquaintances and friends who are "in it" as well. A vast majority of them are active duty/veterans, some are white, some are brown, some are black, some are yellow, and some are red.

So, when these past few incidences have happened involving individuals or two to three guys acting out and saying they are part of the Boogaloo movement, that's BS. They are either idiots, or spook plants.

And then, when the media shows their photos, the past few times they weren't even white. So, there goes the whole white supremacist narrative.

And yes, there are even memes making fun of these idiots. Such as: 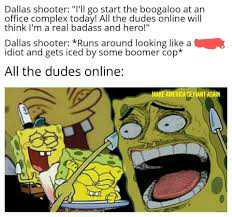 originally posted by: grey580
a reply to: ThatDamnDuckAgain

The problem I see with antifa is that anyone can claim to be antifa. And some of those people are anarchists who just want to start trouble. Along with this we have others who want to make antifa look bad and start problems as well. It's a mess.

Exactly and it is their own fault why it is like that. ANTIFA members here are not getting tired to tell us this is a fluid movement and does not have an organized structure, a leadership to pinpoint.

I say, if you allow this, and allow to have those looters around without condemning them, they enable it. If ANTIFA was anything other than a rising terror organization, it is now because it becomes clearer by each they, all they want is to cause trouble.

Like kids throwing a fit, not aware of their double-standards that are as visible as a lighthouse in a clear night. If ANTIFA passively protects these rioters and looters, they should expect to be lumped in with them. Anytime there is a shooting or racial acts, you hear their, or other far left voices screaming towards the government, that someone should virtue signal and speak out to the public and condemn these acts. OF course they do not call it virtue signalling.

Yet, ANTIFA is standing shoulder to shoulder with these looters day in and out.

Why do I even care? Because everything that happens in the USA swaps over to my country sooner or later. Shortly after the first ANTIFA thugs started CHAD, or CHOP or whatever, the first radical muslim groups in Germany appeared on the scene and started to announce their reign over a city block or region in a city. "Death to infidels!"

The USA is such a vast and beautiful country, regardless what you think, their citizens have one of the highest standards in the world. It is the pinnacle of science, technology but also identity politics. Americans have more freedom than Germans have, just as an example. There are historic reasons for that, but you can take any other European country and it still is true.


Again, if ANTIFA chooses to have an open structure, we all know the true reasons, they have to deal with both positive and negative fallout.
edit on 18.6.2020 by ThatDamnDuckAgain because: (no reason given)

originally posted by: ThatDamnDuckAgain
I will not finance terrorism and riots through the fees they get.


So why would you be ok with them financing BLM?