These protestors had company...

...protesters faced off with members of an armed group that calls itself the New Mexico Civil Guard and counterprotesters toting “All lives matter” signs. Several members of the armed group told The Washington Post they were worried that tearing down the statue would beget widespread destruction of property.

New Mexico Gov. Michelle Lujan Grisham (D), stated that the New Mexico Civil Guard were there to menace, and intimidate protesters. However, Mayor Tim Keller (D) correctly stated that constitutional rights limit local officials’ ability to keep such groups away from demonstrations. The mayor also stated that this was a "peaceful" protest. How can a protest be "peaceful," if the crowd is there to topple a monument? I completely understand why the protestors wanted the monument removed, but are we now going to allow mobs to carry out "street justice" around the country? Apparently, this is the latest trend in Democrat run cities.

The captain of the New Mexico Civil Guard stated, seven or eight of his roughly 20 members came to the demonstration not because they believed the statute should be preserved, but because they wanted to prevent it from being torn down by demonstrators. Another member said they were armed as a “visual deterrent” to prevent violence. “My thing is, it’s public property, if you want to take it down, vote on it, do it the right way,”

The man who shot the Antifa member, was in the process of retreating from a crowd of protestors, when “the group appeared to maliciously pursue” him, with several people striking him with their hands and legs. The protesters also hit him with a long board and tackled him,

The shooter was later charged with aggravated battery with a deadly weapon. The man he shot is in critical, but stable condition.

Police in Albuquerque on Tuesday announced they had arrested a former city council candidate who they say shot and wounded a man at a protest that grew contentious as demonstrators clashed with a militia group.

The Washington Post also posted a minute and a half clip of the incident on YouTube, but edited out footage of the shooter being chased by protestors, and getting hit on the head by a skateboard.

Well, I found the actual footage of the shooting on Twitter.

The 30 second clip shows a crowd chasing the man down (wearing a blue shirt), with one protestor yelling, "I'm going to kill you!" You see two guys wearing masks surround the man, with one swinging a skateboard at the guy's head. A screen shot from this clip, also shows one of the protestors holding what looks like two knives in his hands. 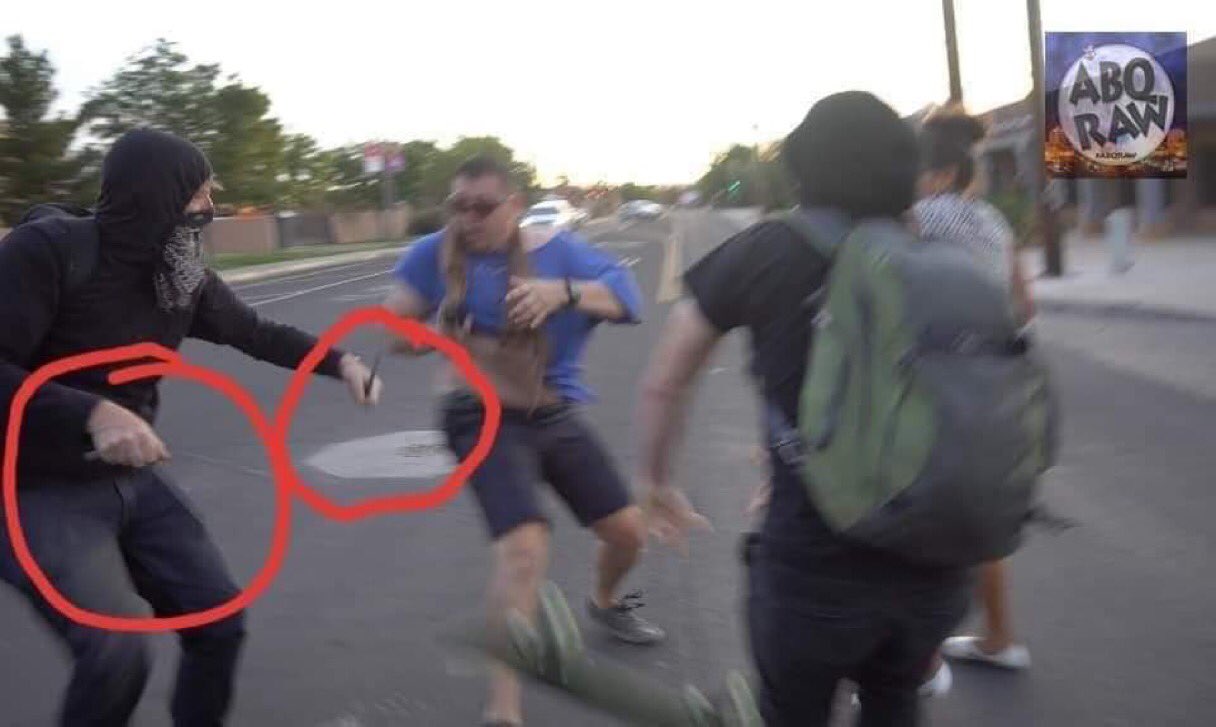 Clearly, this man had every right to use his gun to defend himself.

Like someone stated on Twitter: "We have been telling Antifa for years that red blooded Americans with guns wouldn't stand for their violence."
edit on 6/17/2020 by shawmanfromny because: (no reason given)

Eta just like the truck driver in minnesota.
edit on 17-6-2020 by Irishhaf because: (no reason given)

Of course it's best to have witness or video.


The militia dudes had no seasoned leadership amongst them ... and they rolled over (rightfully so)

Next time, the militarized cops might find out you don't wanna mess around with the Boogaloo Boys. They are better armed (less things like armored vehicles and air support), better shooters, and have very likely taken live fire in their past.

You get some old-school field grade officer or a crusty-old First Sergeant leading them ... and the cops are gonna be on a recruiting mission damned-quick.

Really? In what state is it self defense to kill somebody for simply saying they’re going to kill you? I wasn’t aware of any state that considered words alone enough of a threat to justify lethal force, so I’m curious.

Thanks for putting the links up. I mentioned them in the thread about this yesterday but am generally reluctant to post links to graphic violence. Maybe drop into the other thread and link to this one? Just an thought

posted on Jun, 17 2020 @ 06:15 AM
link
Where’s the whole video of him instigating the protesters and assaulting a lady? The dude is going to jail.

posted on Jun, 17 2020 @ 06:22 AM
link
They have video of the shooter arguing with the crowd before the shooting, that was not the first heated encounter. He was not just guarding like it implies. Also the militia said they don't know him.

This could be MSM trying to escalate the situation by saying the militia was attacked.
edit on 6 17 2020 by beyondknowledge because: (no reason given)

I like how they want police defunded but after the shooting someone yells a couple times get his license plate.

He probably will, for assault. Once you start chasing somebody who’s walking away down the road and hitting him with skateboards, makes it a wee bit difficult to claim you’re still acting defensively, though.

posted on Jun, 17 2020 @ 06:32 AM
link
Compare this with other situations in which cops executing Black men and we hear that the cops are fully justified in taking basically any actions, but here, where "the other side" is subjected to law and order ... all that is heard is emnity toward the cops.

And threats against the cops ...

I'd say something about it being illogical, but that's just redundant at this point.

Perhaps civil armed conflict is inevitable in the US.

True. I made that post reminding others we need to look at the whole picture. The dudes actions prior to the shooting is part of the outcome.

originally posted by: Shamrock6
Maybe drop into the other thread and link to this one? Just a thought.

posted on Jun, 17 2020 @ 06:38 AM
link
ABQ resident here. Saw these videos of the shooter, identified as Stephen Baca throwing down at least two protestors before he was swarmed by the mob. Adds some context.

Blaming the NM Civil Guard before the details even emerged made this all smell really bad. Also never heard of them till now but that literally means nada as I only moved here a year and a half ago.

NM Civil Guard said that Baca isn’t a part of their group:

"The crowd got violent. It's the most hateful people I've seen," said a member of the New Mexico Civil Guard, who did not want to be identified. "They like to call it a peaceful protest but there was nothing peaceful about it."

As people put chains around the Oñate, the New Mexico Civil Guard stepped in.

"And so we interposed ourselves because the mob at that point – it was no longer a peaceful protest – it was a mob," he said.


And here’s our boob of a Mayor ready to brand them as a hate group:

👇🏼 This gets the line of the day award as fascists try and topple monuments:


“We don't allow any kind of communism, socialism, national socialism, any supremacy of any kind,” he added. “You will be gone and with a quickness if that's your professed beliefs.”

So the New Mexico Civil Guard is inciting violence with actual agent provocateurs and your administration is hunting Antifa activists as if pulling down statues with genocidal backgrounds was terrorism.

No further questions, your honor.

I can see feet kicked towards his face. Can see one of them used a board to hit on his head, impact clearly audible. The other one seemed to have a knife, could be a strap from the backpack, though.

It was self defense and the other three to four people should be prosecuted with attempted murder.

Then he should be prosecuted too with assault.
The women was inflicting into his rights to move freely though.

We do not know what happened between the two before or what was said.