originally posted by: Stormdancer777
this is what you missed

posted on Jun, 16 2020 @ 08:05 AM
link
U mean the anti fascist that use violence and yelling and threats to get what they want? That say our way, no allowances, or we will fight you?


originally posted by: Stormdancer777
this is what you missed

Paradise? I hope you're being sarcastic. That whole area is full of spoiled brat hipsters who expect everything to be handed to them. Maybe a paradise for lazy entitled folk but for us living in the real world, it's sad and pathetic.
edit on 16-6-2020 by jidnum because: (no reason given)

Ugly and angry, this place is for you

Anti-Fascist using Fascists tactics = Fascists not matter how you put it.

posted on Jun, 16 2020 @ 03:25 PM
link
I'm learning more day by day on why this was their perfect storm of angry stupid activism. Seattle cops are actually underpaid, overworked and overscrutinized by city council. The good law enforcement we had is all leaving in droves, the current force is depressed because they can't enforce jack! If they create a bust they most likely never prosecute and are back on the streets.

Our downtown cops main job is to babysit junkies, they all have od kits and training and repeatedly have to use them, let that sink in while you accuse Seattle cops of killing people, just think about it

Here's a local liberal source that spells it out pretty well: What Seattle Police Said in exit interviews (Blistering)


originally posted by: Stormdancer777
this is what you missed

Paradise? I hope you're being sarcastic. That whole area is full of spoiled brat hipsters who expect everything to be handed to them. Maybe a paradise for lazy entitled folk but for us living in the real world, it's sad and pathetic.

Definitely being sarcastic. It looks like a Third World s**thole already. 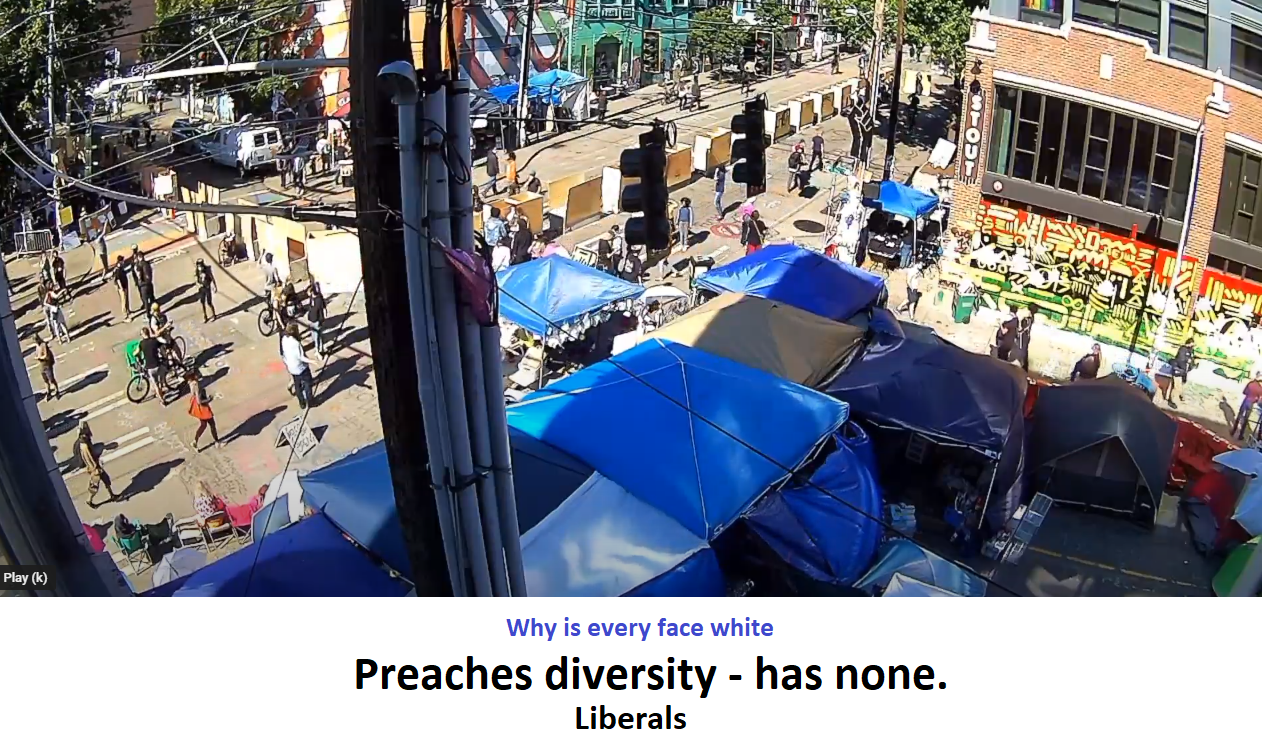 Why is this the least diverse place in the continent? They need to check their diversity privilege it seems like, where is the faux liberal outrage?

Ok here's another reality check from a local, this area actually has tons of diversity, this neighborhood is the center of the LGBTQ community so has tons of black asian hispanic and other races all normally happy together, but they are either hiding or holed up somewhere safe, the pic is during the daytime when all the idiots and tourists are gawking, so mostly white.

Up in that field full of junkies mixed with out of town asshats there might be some diversity, but I stopped caring if theyre diverse since Im more concerned if they are armed.

originally posted by: underwerks
a reply to: LSU2018

So the black female police chief is a liar? How peaceful would it be if you walked through with a MAGA cap on?

Probably. I don’t know her personally but being a cop that subjected themselves to politics enough to reach chief doesn’t inspire a lot of confidence.

It’d probably be the same as most places in America if you walked around with a MAGA hat. It’s a blatant fascist symbol at this point and people don’t take kindly to that most places. That being said, I watched a video of a Trump supporter in Cap Hill talking about taking up arms and protecting the protestors.

I know that doesn’t support your narrative, but most of reality doesn’t.


No sorry Maga hat is not a fascist symbol, it’s just that people on the left are trying to portray it that way. People who wear Maha hats by far are for free enterprise capitalism, free speech, the right to keep private property, and limited government. Trump wanted to open the country back up so we can restart the economy and get back to normal. So what have we got on the OTHER side.... a bunch of violent rioters demanding the end of capitalism ( it’s always that with these Soros paid groups), extortion of local businesses, camps with communal gardens while making pleas for donation of food ( not to mention it has to be vegan), segregation, and so on, and this is just the protesters... I haven’t even gotten to the politicians yet.... the progressive politicians are arresting people for opening their hair salons in the shutdown to feed their families, of for taking their children to play in the park... remember the Michigan gov... these people are the fascist. Savage said they were “channeling their Inner Mussolini”. Fascism really is a leftist thing anyway and has been misnamed as far right to obscure the real socialist underpinnings.