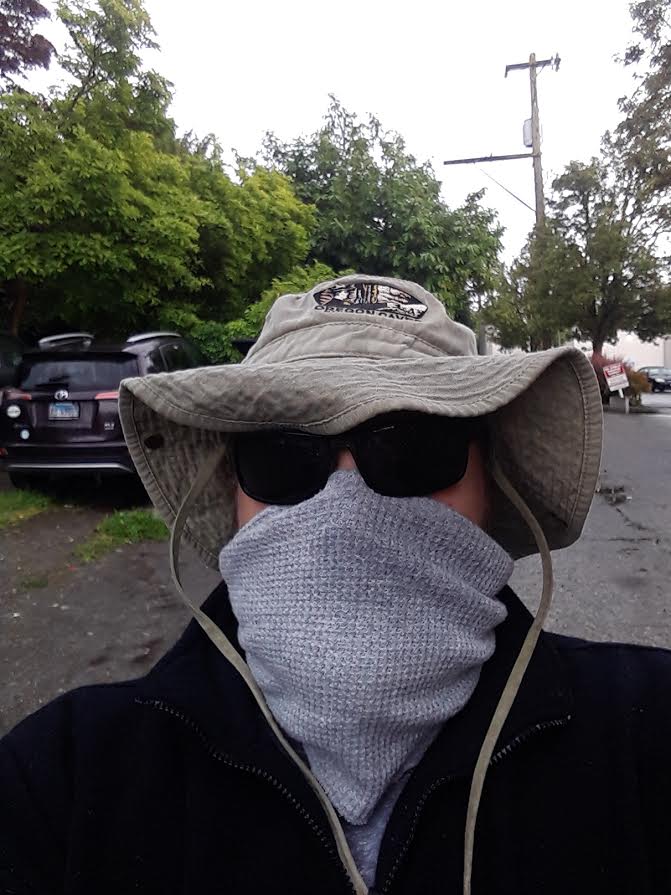 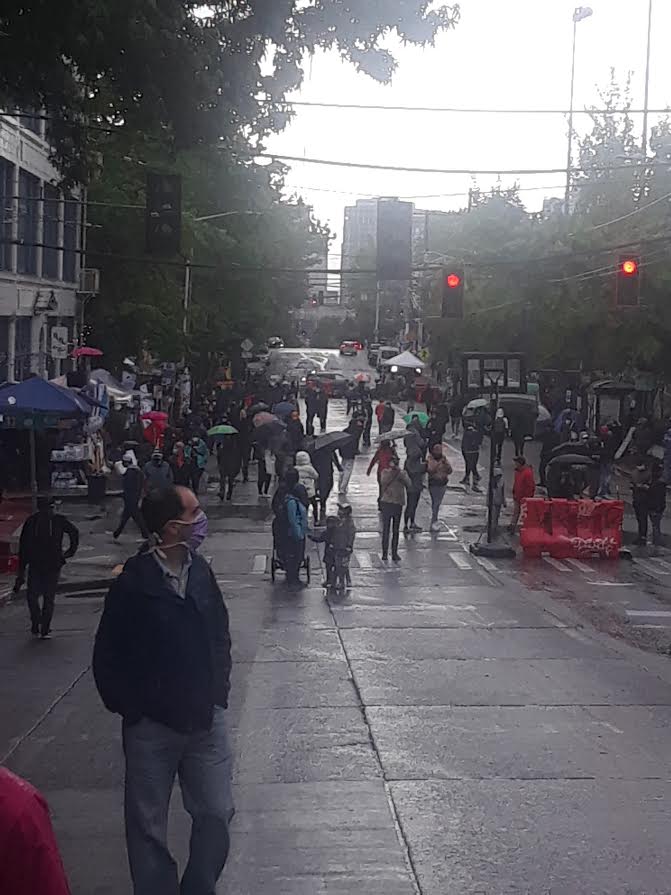 My disclaimer: I am not on either side of this issue, this is not a politically motivated thread, however I slightly disagree with what these protesters have done, it's not cool to just shut down a street. That being said the following is a description and some pics of what I saw.

So I went up to Seattle on Friday June 12 to see for myself what the whole autonomous zone thing was about. I had been hearing from friends who live on Capitol Hill (on East John St a couple blocks away) saying there was really not much going on, no guns, no guards hassling people. Said it was pretty ho-hum.

Yet the MSN was showing pictures of armed guards, and rumors that local businesses were being extorted, and terrified locals, Antifa, White supremacists, mass chaos, terrorists, destruction, etc.

I understand this was during daylight and there are probably troublemakers at night but I must say it was totally mellow and peaceful. I saw no guns at all, I walked in and out and in again through different barricades and nobody harassed me at all, in fact most of the barricades were not manned at all, save one who was a security guard for the apartment /business complex, to make sure the garage door remained shut...

I saw businesses open, an outdoor taco bar , a vendor selling hot dogs, groovy lounge music was playing from somewhere, kids and dogs, 2 well stocked co-ops with tons of food, a memorial wall for victims of violence, hundreds of very respectful people walking around, a few people speaking out to small crowds, again not too loud.

I also noticed really how small of an area it is. The MSN is saying a 6 - 9 square block area.... In reality it is about a 3 block stretch of one street, and the other half is an open park. Yes an open park. Again the MSN fails to point that out at all from what I have seen. It takes about 4 minutes to walk around the whole thing slowly......It's tiny. a couple street corners really.

I saw a local news reporter (Debora Horn) and her camera guy, they were just walking around unmolested.

I saw cars pulling in and out of an apartment complex, drove right by the Barricade....

Quite frankly the whole thing was more like a street fair, music, the smell of food cooking...

It was really calm. would almost be a shame to blow it up. To me at least this is a cement case against the fear mongering MSN.

I took a bunch of pics with my crappy phone and it was raining so I apologise for the low quality but this is what I saw over a few hours, (about 3-5 PM)

here is also a link to a local news article that fairly describes what I witnessed: The CHAZ 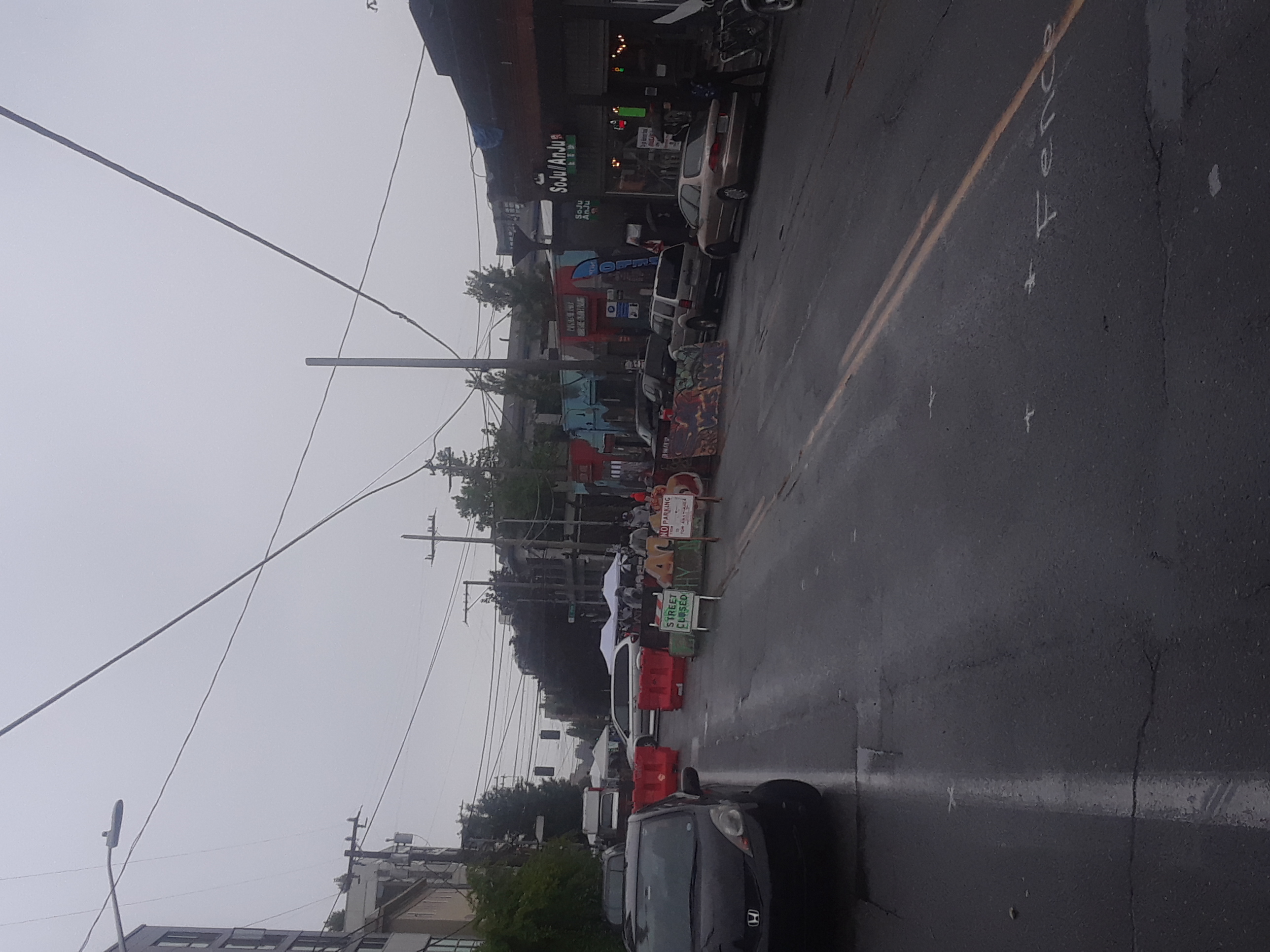 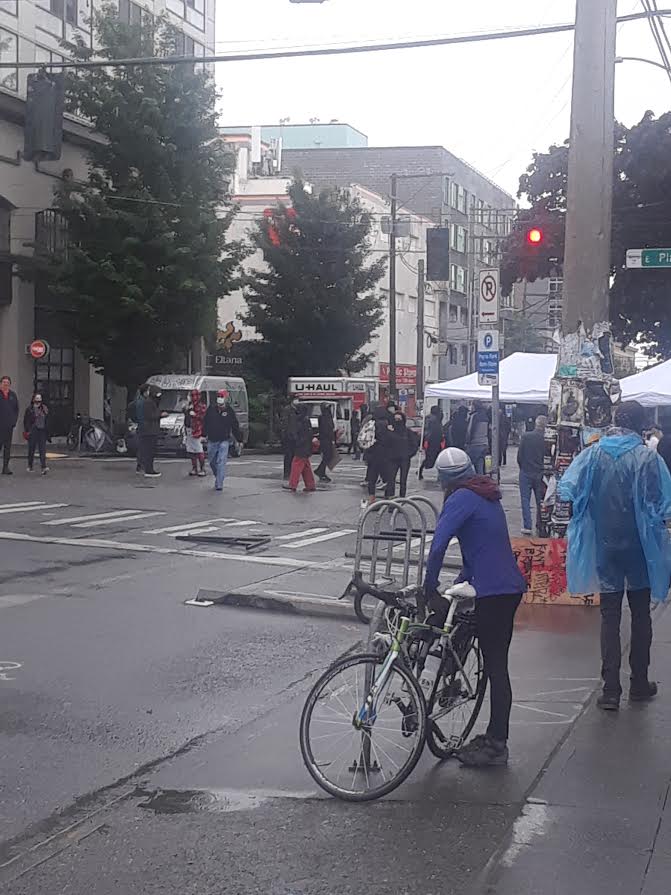 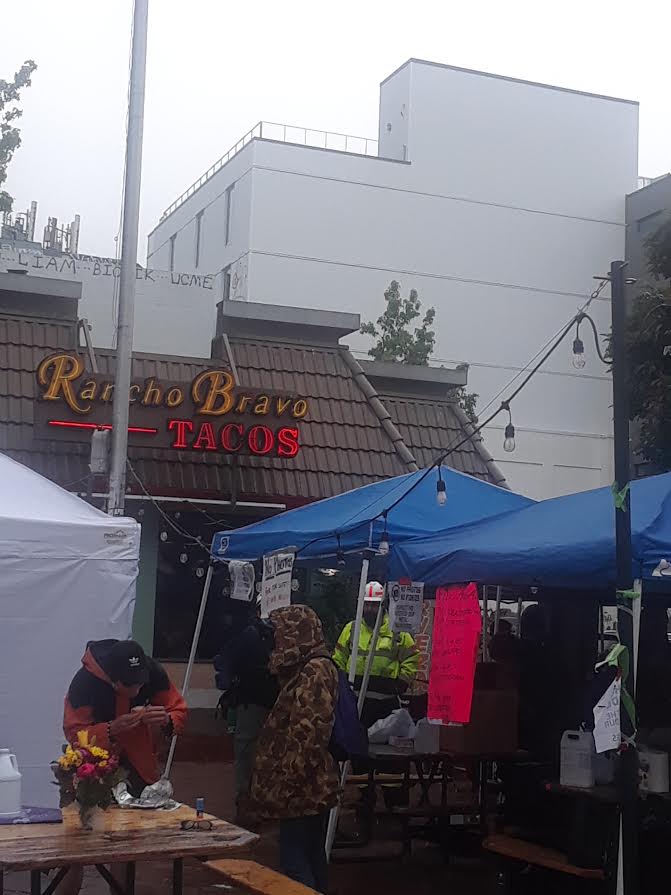 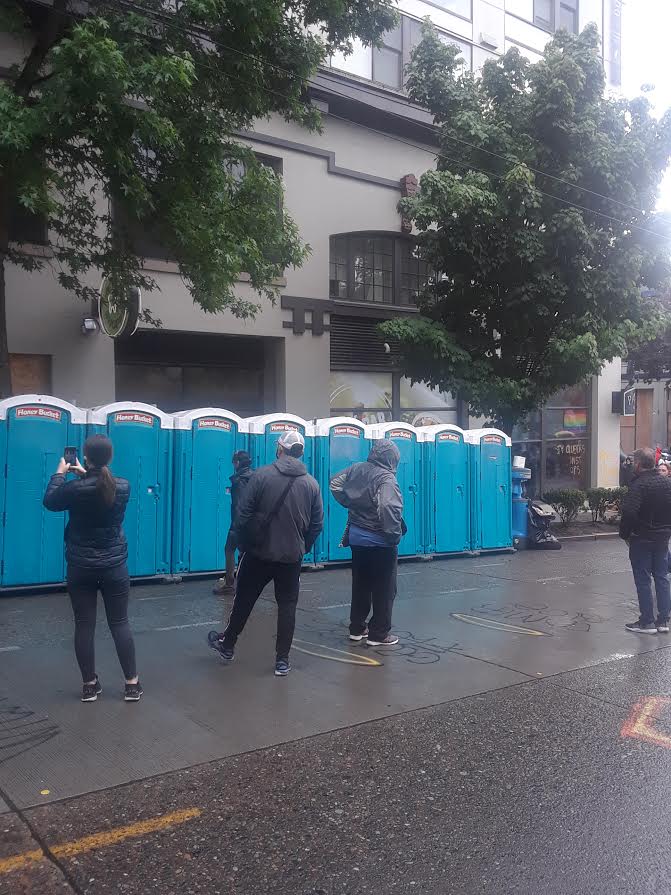 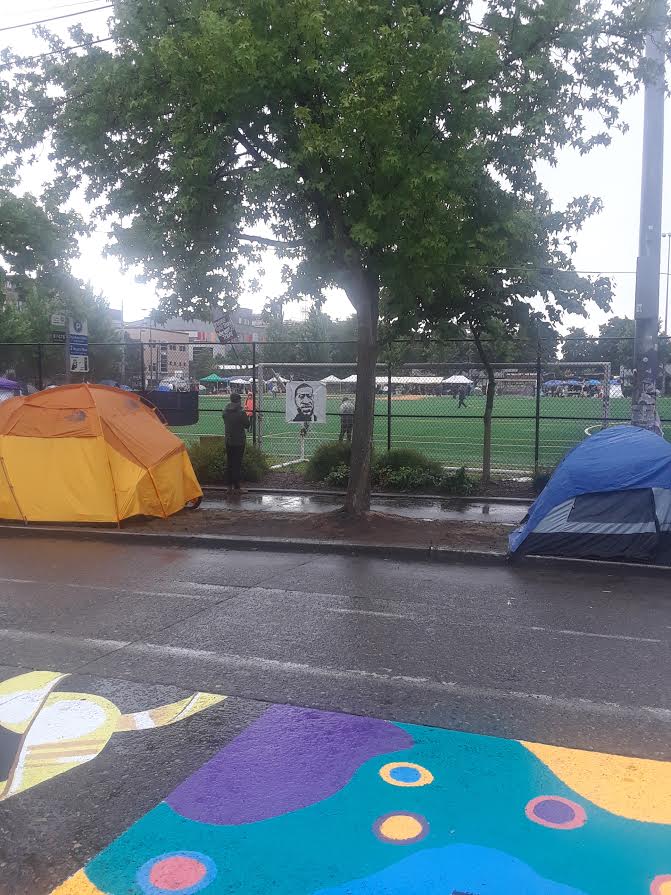 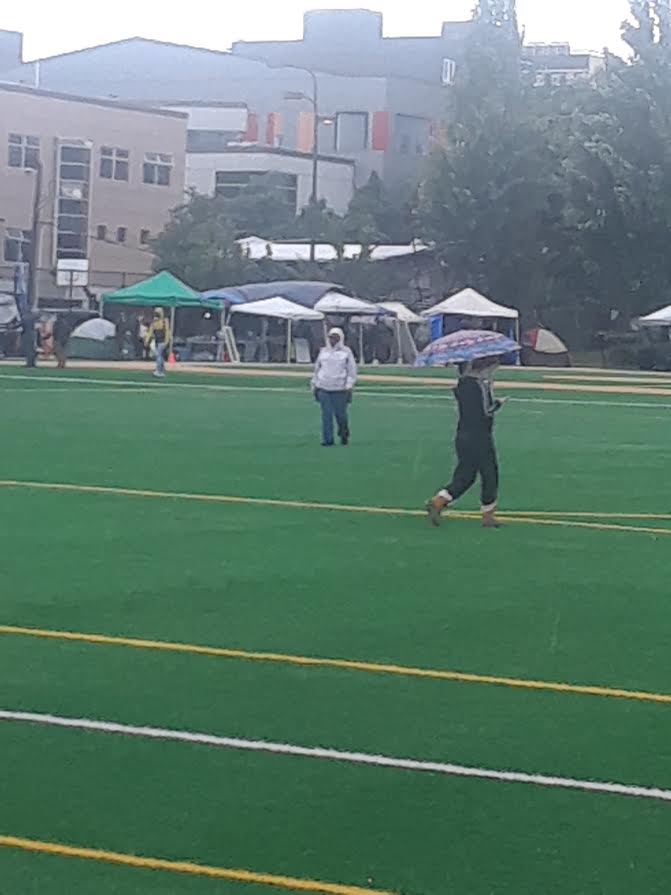 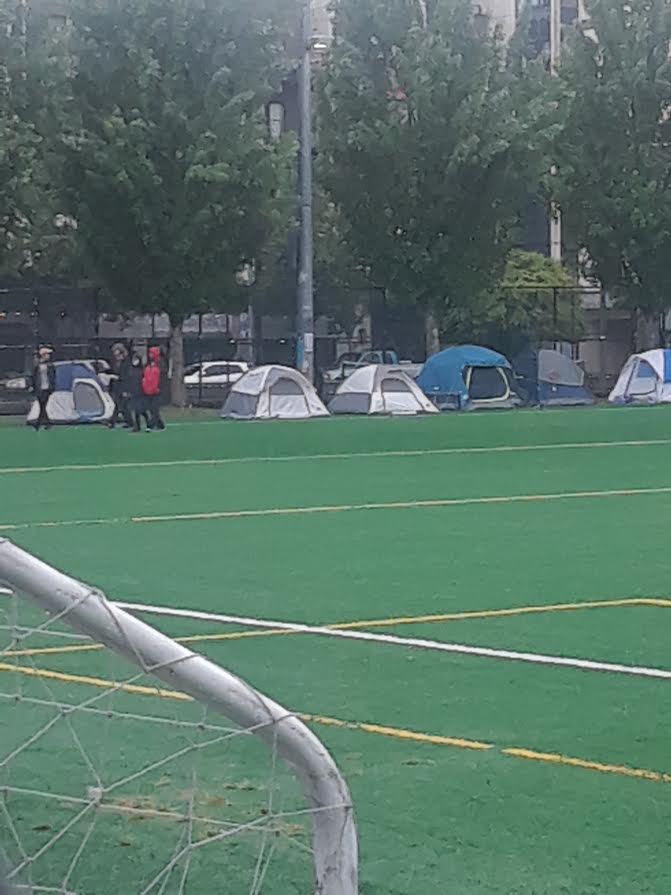 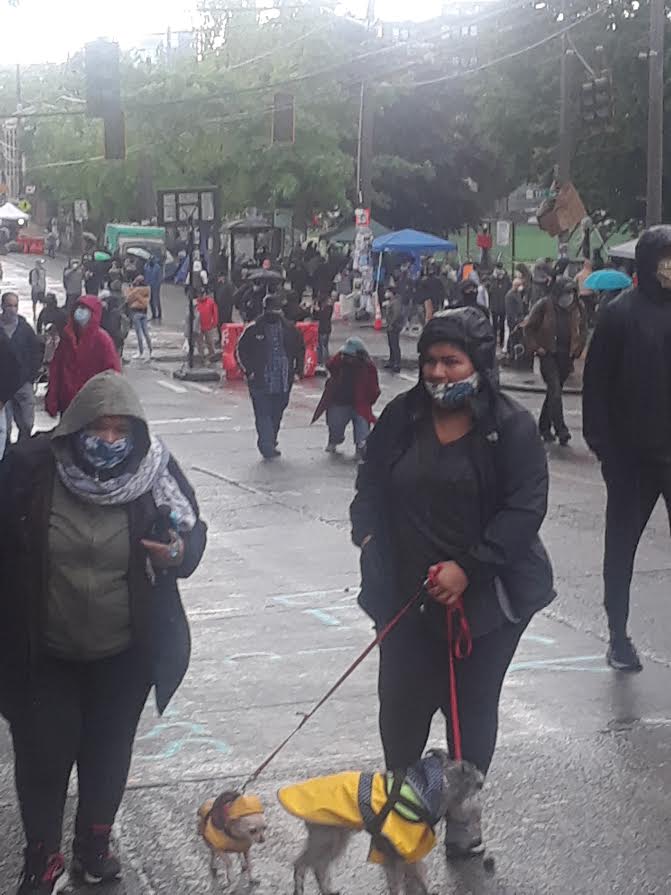 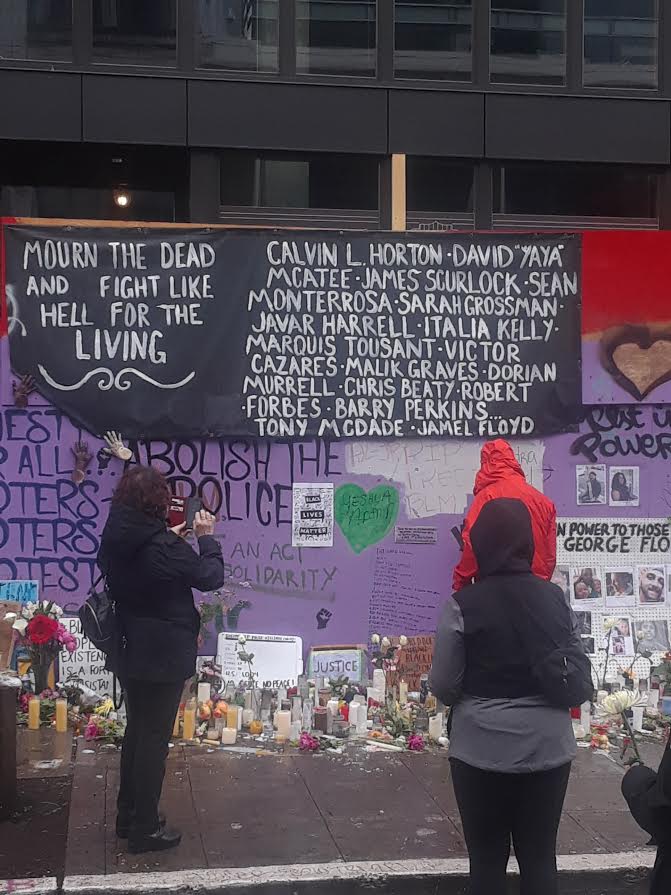 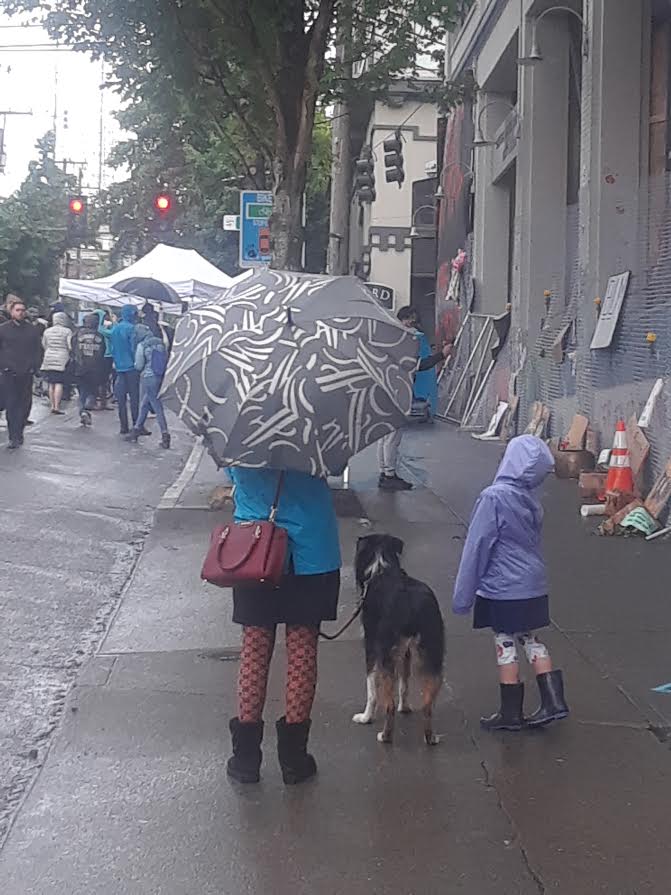 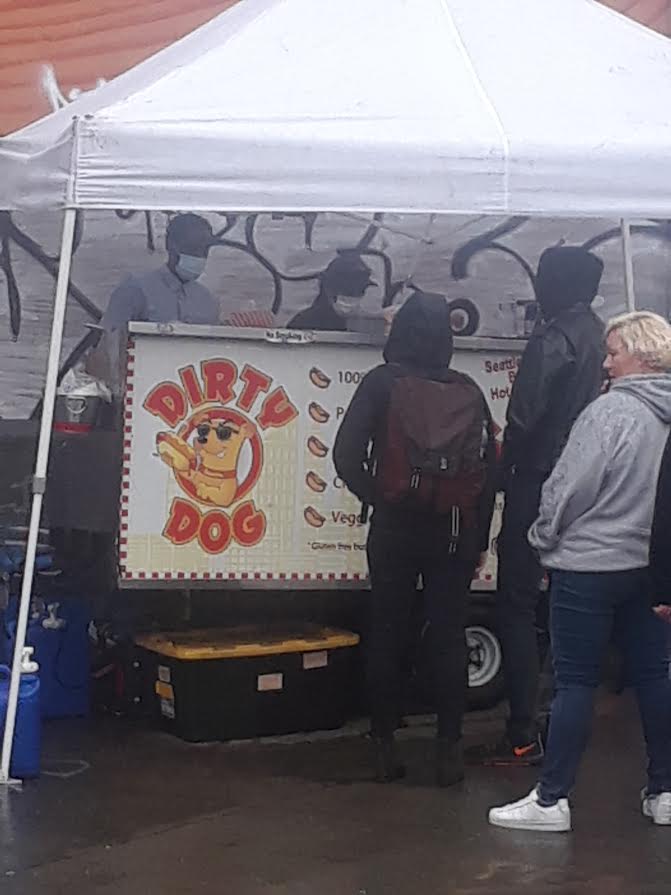 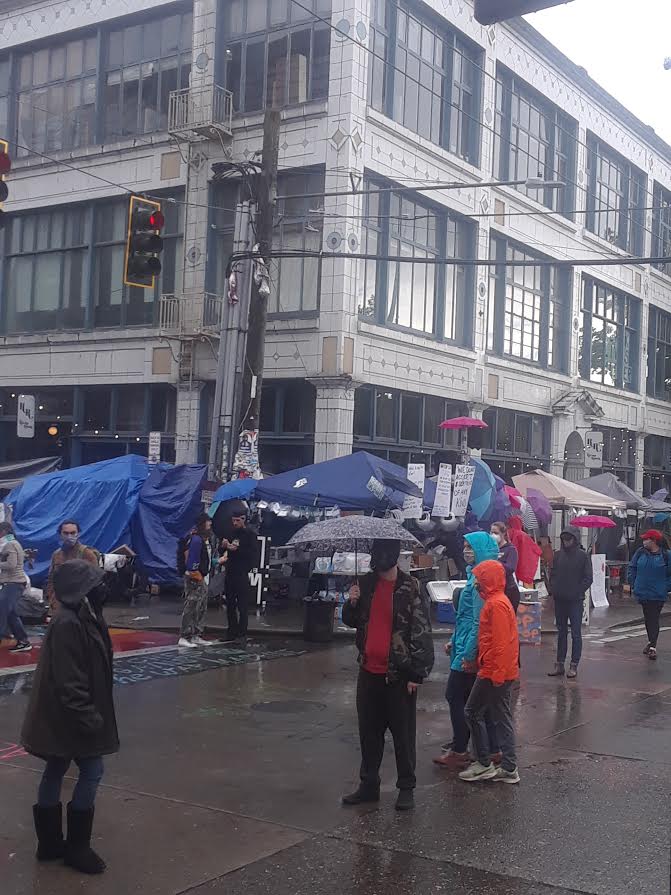 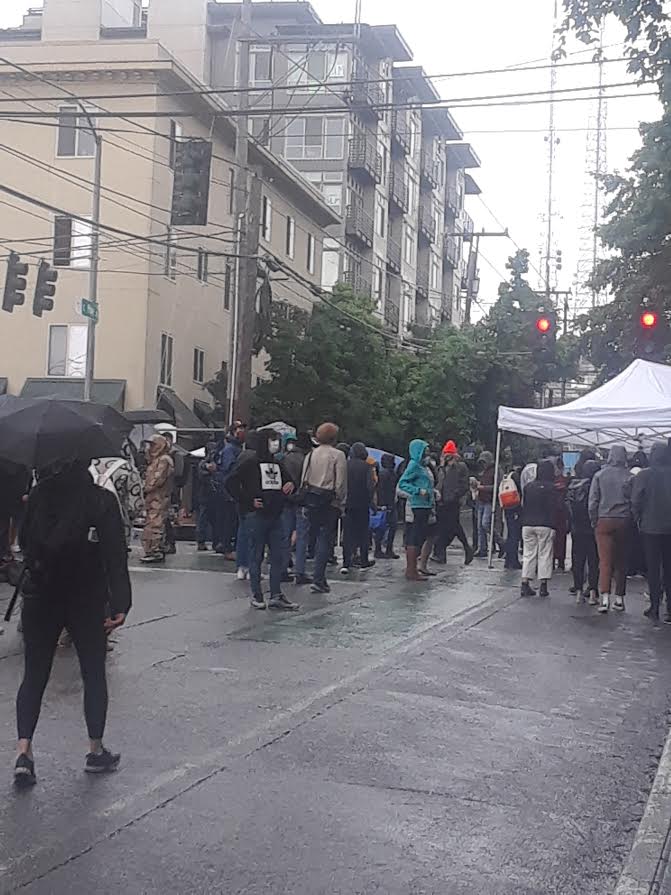 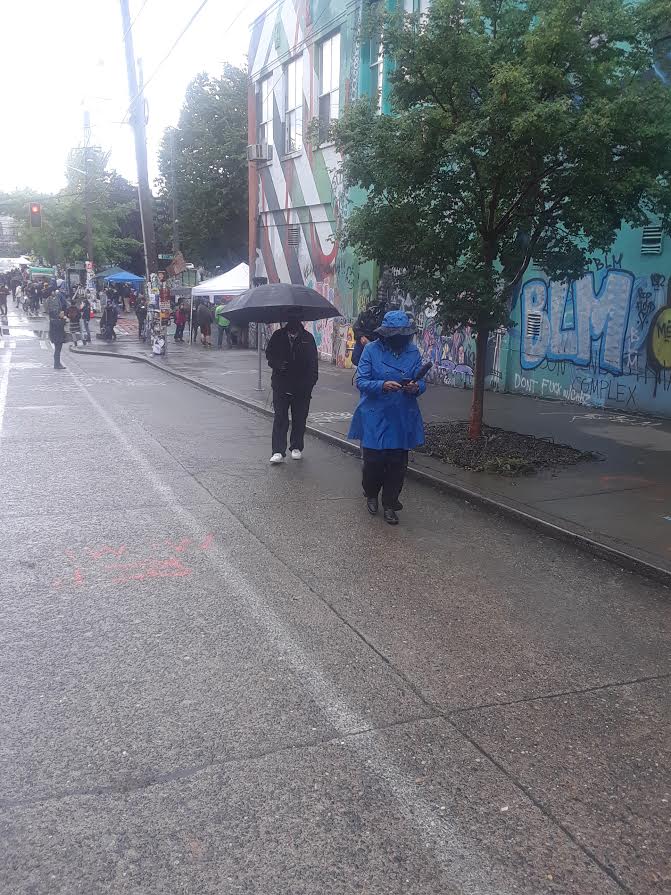 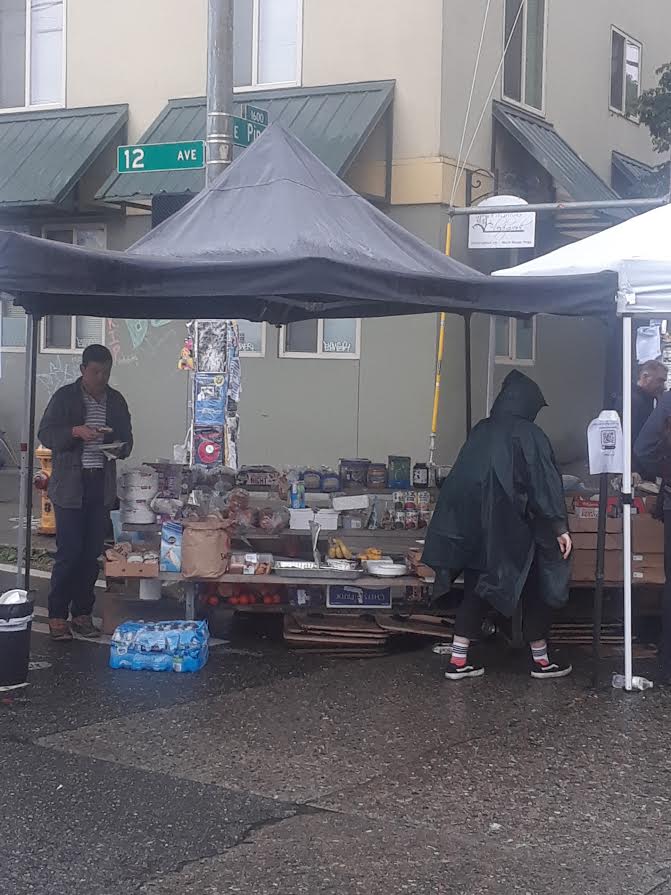 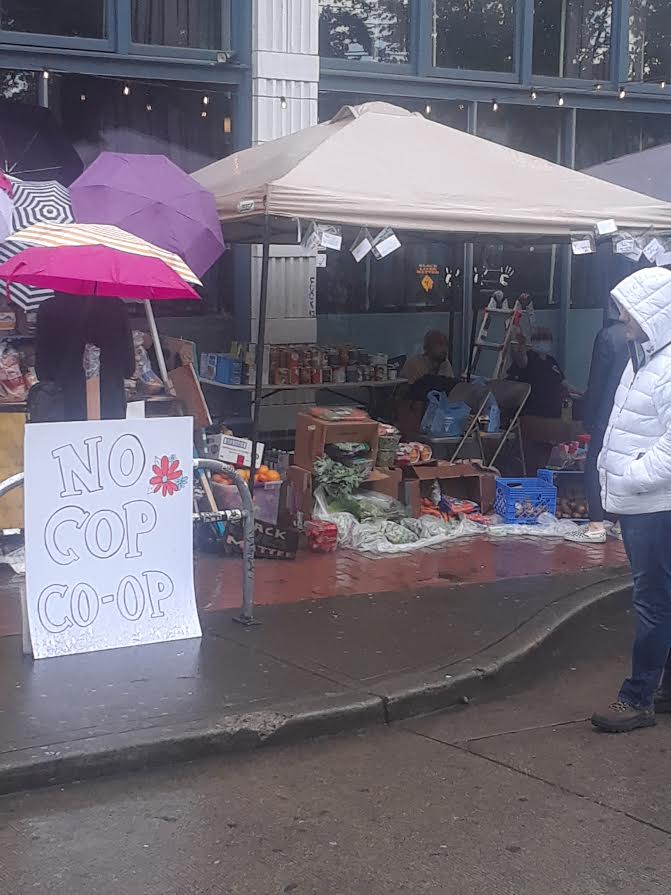 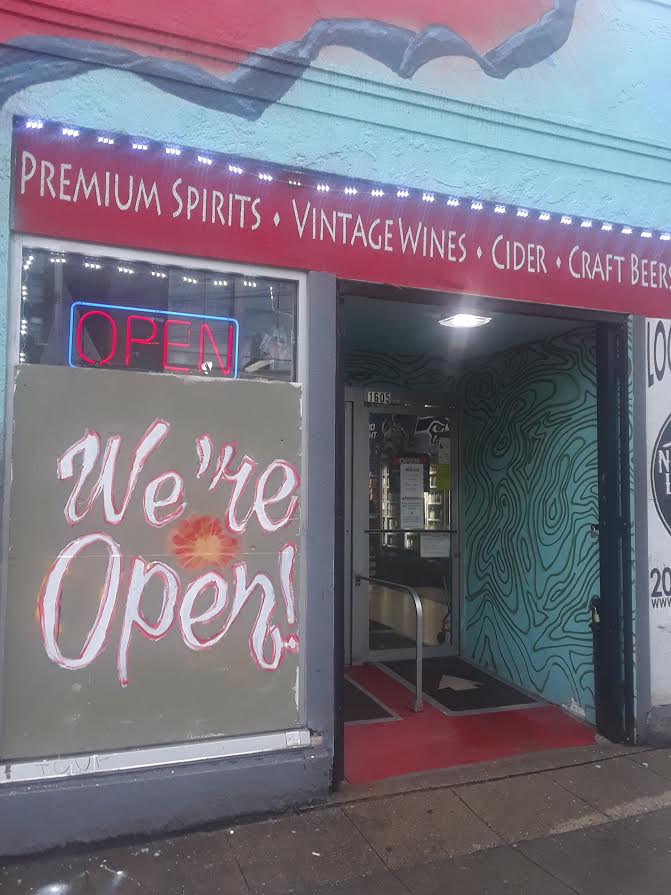 Thanks for the first hand photos.
edit on 14-6-2020 by Liquesence because: (no reason given)


Xcalibur254
+6 more
posted on Jun, 14 2020 @ 06:36 PM
link
Thank god the Hell's Angels are on their way to make sure this peaceful experiment turns into another Altamont.

I'm glad you made it out alive!

Thank you for the target coordinates!

Hellfire missiles are locked and loaded!

Exactly what I am a bit worried about. This will be way too boring for Hell's Angels.

They'll set up some tattoo tents!


originally posted by: Sookiechacha
They'll set up some tattoo tents!

One slight difference though...

originally posted by: Liquesence
a reply to: Lr103


CHAZ (autonomous zone) is now renamed CHOP (occupied/organized protest). What summer of love street fair has specific demands of its now conquered occupied land owners/prior governorship in order for its *vendors* to go home? Who plants a dixie cup garden on concrete, who builds a wall in an 'autonomous' zone?


originally posted by: BoscoMoney
Nazi Germany was much the same as well.

One slight difference though...
In Germany it was the actual Fascist in control, not the anti fascist.


Those pesky details could derail a vibrant movement created by children for other children.
edit on 14-6-2020 by vethumanbeing because: (no reason given)

The rain helps wash it away into sewers and directly into Puget Sound. Seattle is a terrible place for a revolution, and Capitol Hill, in particular, is butt ugly. Nobody goes up there if they don't have to. I once lived in a 100 year old apartment building literally chained to the hill (i.e.: Capitol Hill) above the freeway. It's a sad, sad place. When they show you pictures of beautiful Seattle, they are not showing you pictures of Capitol Hill.

who builds a wall in an 'autonomous' zone?

Those who want to make autonomous zones great again?

originally posted by: Xcalibur254
Thank god the Hell's Angels are on their way to make sure this peaceful experiment turns into another Altamont.

We may NEVER see the the end of this Sh!t — if people have your attitude....


One slight difference though...


originally posted by: Xcalibur254
Thank god the Hell's Angels are on their way to make sure this peaceful experiment turns into another Altamont.

A peaceful experiment. Oh the horror, people actually, you know, enjoying themselves.

Send in the police! Forcefully Suppress the Peace!

I guess this is what happens when you give peace a chance, or there is a peaceful experiment, damned new-age hippies.

Let's return to the violent old way, police brutality, shall we?

veteranhumanbeing: who builds a wall in an 'autonomous' zone?


Liquesence: Those who want to make autonomous zones great again?


CHOP cannot govern themselves (autonomy is the very definition). They had to ask for foreign aid (already) in the form of 'portapotties' in order to deal with their own human waste accumulation. They are stealing electrical and water services from their captives. They are not autonomous; they are parasitic occupiers.
edit on 14-6-2020 by vethumanbeing because: (no reason given)