WRONG - SpongeBob directly tweeted out that the rumor is BS.... 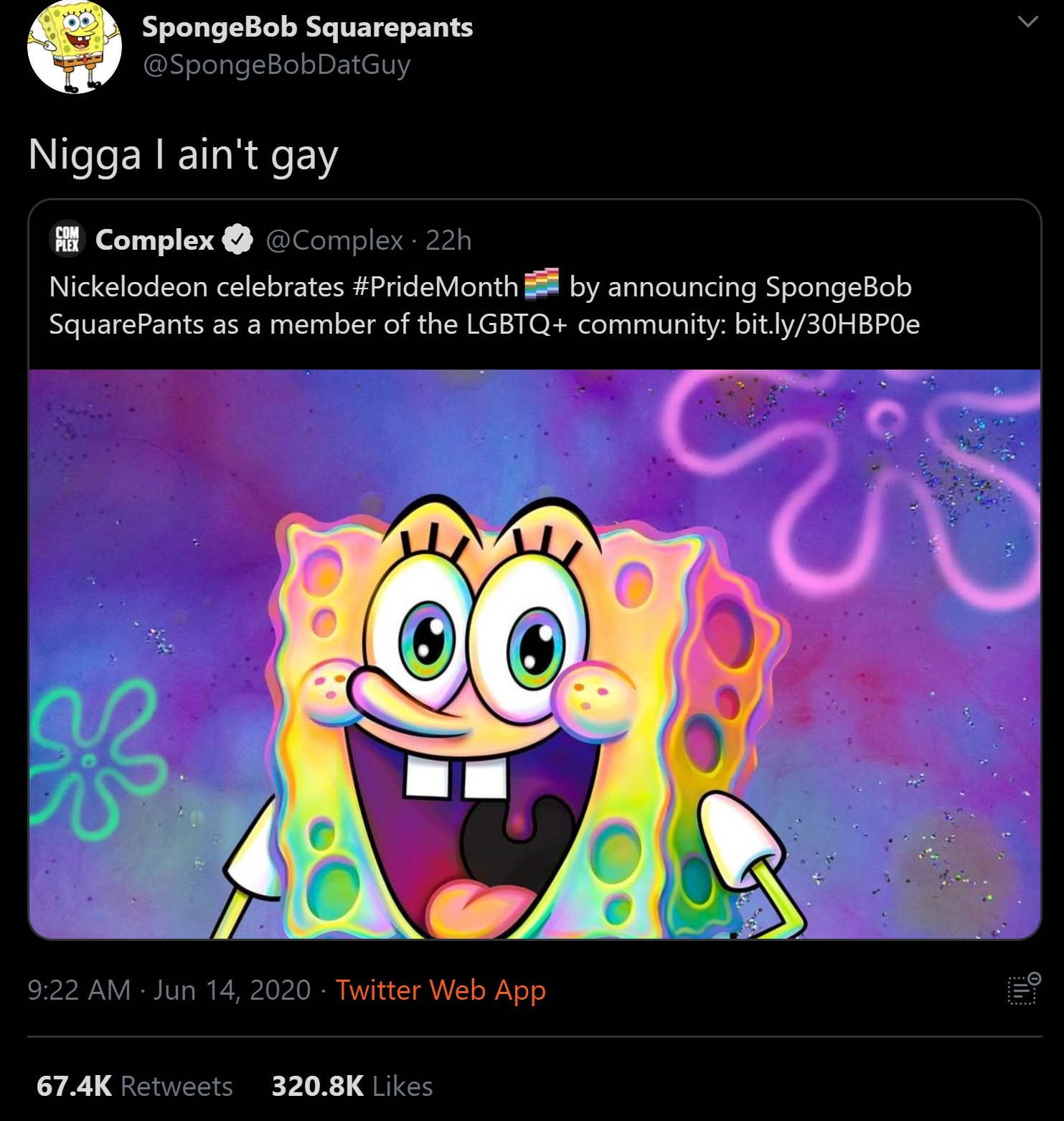 posted on Jun, 14 2020 @ 03:36 PM
link
Now that he has some sort of orientation, is it wrong to ask what a sponge phallus looks like? Now that we know he has one I figured now is the time to ask.

posted on Jun, 14 2020 @ 03:42 PM
link
True but so do his handlers....and and not sure ManSizedSquirrel but like all sponges it prob gets bigger when wet. a reply to: DBCowboy

originally posted by: bluemooone2
True but so do his handlers....and and not sure ManSizedSquirrel but like all sponges it prob gets bigger when wet. a reply to: DBCowboy


(Scratches chin for a minute and stares off into space for a quick visual) ya you’re probably right.

Not SpongeBob lead pants! What is this world coming too?

I rubbed two blue-colored sponges together once.

And I bet they lathered up well, too.

This is the problem with the US, look at all the adults that know these characters in intimate detail.
SMH!

My favorite episode was the one where Spongebob was teaching how to blow bubbles, and Squidward thought it was so stupid but then he couldn't do it and got all frustrated. Pretty much summed up every day working in corporate IT.

Hey extend that to the rest of the western world I am in England and though I was more of a Simpson's fan, well kind of, and could more readily relate to Homer with his donut addiction I have seen a few episodes when there was nothing on and I was not on the PC.

Odd thing about SpongeBob is it really subliminal crowd control (got to throw it in there this is a conspiracy site) as those show's are kind of hypnotic and despite the idiotic characters you just have to see if plankton (the real underdog tragic hero figure whose business is going bankrupt because of crab's MSG) finally steal's the recipe - even though you know he never will.


you just have to see if plankton (the real underdog tragic hero figure whose business is going bankrupt because of crab's MSG) finally steal's the recipe - even though you know he never will.

You should see me discuss pokemon with the nephew. I followed what my kids followed. Probably still have a beyblade in one of my drawers

If you're a parent, you follow what your kid does in order to audit it and make sure it's what you want them to be involved in.

Our son had a brief flirtation with Harvey Danger for example that we nipped in the bud because we quickly realized that the shows had absolutely no redeeming value to it whatsoever. There were no characters with any good qualities. They were all selfish and self-absorbed and never grew beyond that. The younger sister was the worst.

So we cut him off from it and steered him back toward some other shows that at least had some attempt at redeeming values and likeable characters.

We never let ours get into SpongeBob, so I can't comment on that, but he really likes Duck Tales and Big Hero 6 and Amphibia, and we admit to enjoying Duck Tales because it's fairly faithful to the Duck Tales from our past while also being new. But we're probably fairly familiar with all of them because we keep tabs on what he's watching.

posted on Jun, 15 2020 @ 06:40 AM
link
This troll was spectacular. Prime the public with news that spongebob is lgbtq, then when folks flip out point out that hes asexual because hes a sponge.

Ah found one, cover your eye's if you are easily offended.