Fauci said on "GMA" that the report "is certainly disturbing but is not surprising." He added that he "wouldn't be surprised" if some of the people who were there demonstrating were also infected.

"Many of them would then go back to where they were [from] because not everyone was demonstrating in the city where they live," he said. "So it's the kind of things that we were concerned about and, unfortunately, we're seeing it come true right now."


This comes as fauci says Corona is his worst nightmare . Also aa some DC national guard members have contracted it . Though they won't say how many , they're a institution not a household , meaning , not good for them .

No matter how much you may believe in controllers , there's a real real danger of the [global] pandemic slipping out of anyone's control. And if that happens you're going see # hit the fan , like properly hit the fan .

No matter what you think of fauci he's not wrong here on this..
Having mass gatherings like that and going to them is about the stupidest thing you could do. The total reverse of simple advice.

I would fully expect the numbers to increase as testing is more widely available and being done on a larger percentage of the population than in earlier months. The numbers that should be watched is strictly how many are be admitted into hospital beds vs how many beds are available. There is no reason to isolate everyone if the hospitals can viably care for the few more extreme cases that occur. 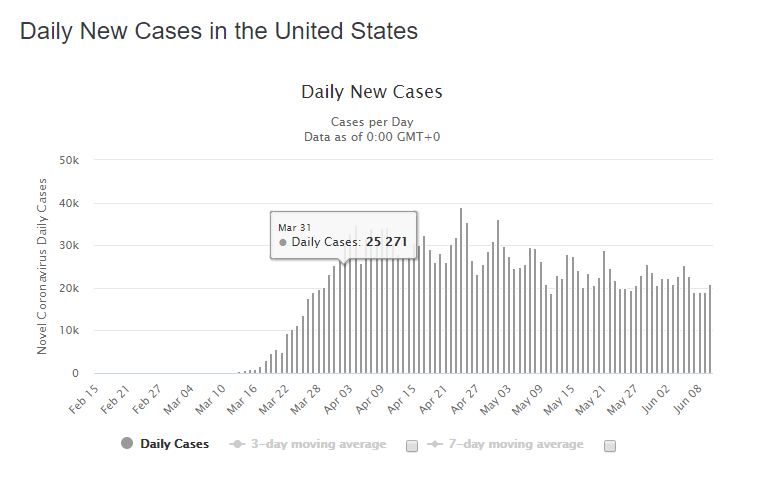 Thank God, and here I was going back to praying for a giant meteor again.

Numbers of infections are going up there n 19 states even as orders are lifted.
As we ve seen the state of America's graph shouldn't be looking like that , it should have very few new cases by now , like the others.
In the UK testing has increased and cases have dropped.

That's more due to most places in Arizona being spread out. It was just delayed in getting here.

Numbers of infections are going up there n 19 states even as orders are lifted.

There is 50 of them there states. Going down in others.

America's graph shouldn't be looking like that , it should have very few new cases by now , like the others.

In other words its flat and not SPIKING like you said.

The daily deaths are also dropping and following the same trend it has been for months. Not spiking. 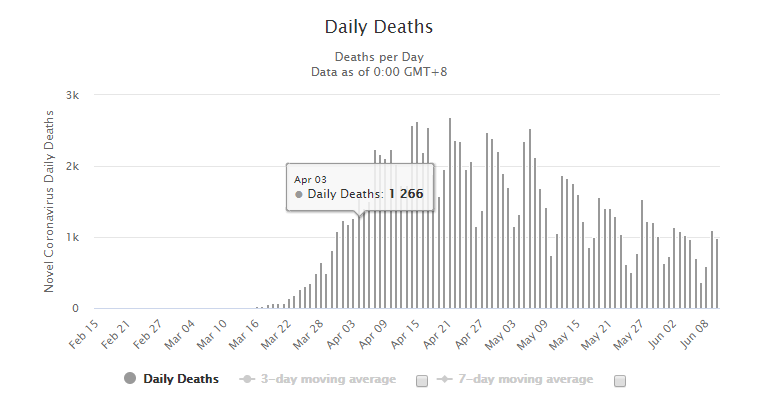 
Someone gave me a newspaper clipping saying that in 2022 offices will have a facility where you will wear something that will let you know if you can go to the toilet safely...... following social distancing regs.

I don't think I will be able to get a haircut ever again at this rate.

If you all get exposed quickly and without mitigation the hospitalisation rate will wreck people's chances of survival.
Then you'll be looking at something like a 30% death rate , and only upwards from that , as concentration in close proximity means more severe morbidity.
And then you've got coinfections and secondary infections to worry about too. No hospital during this will make for some really harsh outcomes.

It's never safe to use a public toilet...

I think I'm going to go for either the Dr. Johnny Fever look or the George Carlin look. Whatever doesn't make it look like a mullet.
edit on 11-6-2020 by HalWesten because: (no reason given)

Then you'll be looking at something like a 30% death rate , and only upwards from that , as concentration in close proximity

posted on Jun, 11 2020 @ 07:36 AM
link
What happened to the death reports. They totally cut that aspect out when it was all the rage early on. Now it's just "cases". A case could mean anything. Mild to severe symptoms and probably mostly mild since they stopped death reports. During the riots and protests they were not even bringing up the dangers of it spreading. All we heard was stay home then they start proclaiming protests are welcomed...meh. It's beyond stupid at this point.

originally posted by: stosh64
a reply to: DoctorBluechip
Thank God, and here I was going back to praying for a giant meteor again.


Murder Hornets, please. The longer the suffering ... the better.

Don't forget the locusts . Whatever it is has to leave the physical infrastructure somewhat intact . And it seems to have been arranged that the post apocalyptic world won't have so many statues representing dodgy politics either.
Grand aristocratic residences especially those with biblical heraldry are protected . There's inhabitants , and then there's ex inhabitants . When God has come to reclaim what's his , there ain't a thing you can do about it.

Some will say it's because of testing.

Based on what I'm seeing around me, testing has nothing to do with it. It's the same as it was before.

When I came in to work Monday, I was advised that 2 persons were sent home because of similar symptoms. We found out that both were positive for covid.

My aunt, a clinic nurse, just mentioned that there was someone that tested positive in their facility just recently as well.

As soon as they opened the borders on this thing, everyone went ape$#!& and started partying, hanging out in groups and what not. It was as though an all-clear was called and the virus suddenly didn't exist. I saw what was going to happen and I've been keeping daily tabs on the numbers.

This is what we get for being so stupid and careless.

But noooo... It's a conspiracy to lock us down.

It's nothing at all... it wont even kill 50 thousand people. 113 dead in the US alone later... Well lookie here. Looks like we have a virus problem again.

Well... We went from a problem to an all out rampant case of contractions. Look at the numbers just in the US. Those weekly spikes don't mean anything to most people, apparently but they certainly tell me things are NOT alright and they're about to get seriously worse.

Testing is no different than a month ago. More people aren't getting tested. They're just getting tested when they have the symptoms which means carriers abound without symptoms are everywhere.