That is the reason that the “talk” was held! You have something good for the peanut gallery to go and get het up about!! Gets your school publicity and money and stuff.

About OP’s material, Phage had it nailed in his first post. You can use “math” (I.e, statistics) to defeat or prop up your argument. That is why peer reviewed papers need six sigma (million) degree of data, because you can’t harsh on that!!

But you can with statistics that are not published and held at an informal talk meant to challenge a scientific principle.

If “god” designed me, why do I have an appendix? That is one of my favorite answers to the ID crowd! (I am saying this was n a joking manner, not a challenge or threat, whatsoever designed us used the poor mammals running around and they had the flaws already! Yes, naked ape...)
edit on 11-6-2020 by TEOTWAWKIAIFF because: darn interwebs putting in words I didn’t type...

originally posted by: AlienView
They have given up on the 'missing-link' - Apparently it doesn't exist !!!

The Missing Link That Wasn’t


Or maybe its because in fact Evolution does not work, never did work and had little, if anything to do with the

originally posted by: TEOTWAWKIAIFF
a reply to: Box of Rain

If “god” designed me, why do I have an appendix? That is one of my favorite answers to the ID crowd! (I am saying this was n a joking manner, not a challenge or threat, whatsoever designed us used the poor mammals running around and they had the flaws already! Yes, naked ape...)

Have you ever looked at the bones that they base these supposed missing links from? They are laughably incomplete. If these transitional hominids were roaming around for millions of years we would be finding more of their remains. Here is Lucy, the most complete "Australopithecus" remains: 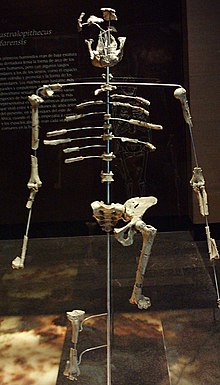 is WHY
Science is not really concerned with that.


Then it is not really science - Everything that happens must have an explanation, a cause and effect.

If Evoulution is occurring without cause and effect then it is an observation of an apparent phenomena,
which I'll grant you, Evolution observes many things - but real SCIENCE always has a reason WHY.

Unless you want to believe what the great Quantum Physicist Max Planck once said:

“We have no right to assume that any physical laws exist, or if they have existed up to now, that they will continue to exist in a similar manner in the future.”
― Max Planck, The Universe in the Light of Modern Physics


So maybe at one time in the paths of natural history there was a process that began the course of what you might
like to call Evolution - But until the science behind it is known and understood - Intelligent Design will have to do.

But you can go on believing that random chaos and mutations back the order of existence
- I'll continue to believe that order backs the existent state - Even if I can still not determne its goals.


“Religion and natural science are fighting a joint battle in an incessant, never relaxing crusade against skepticism and against dogmatism, against unbelief and superstition... [and therefore] 'On to God!”
― Max Planck

posted on Jun, 19 2020 @ 04:39 AM
link
"The strongest paradox in all of natural history is the symbiotic relationship between
Evolution and Intelligent Design.