originally posted by: Raggedyman
a reply to: Spider879

Seriously is it possible Trump could do anything to win those who hate him over, should he even care
Trump has a job, improve the US, seems he is working on that

Yeah, he is devisive, rude blunt and at times immature but, it’s kinda entertaining and Trump has improved the US economy
Haters going to hate

Yes he could, stop being. divisive check, if by rude you mean disrespectful, yes, immature yes stop that, improve the economy credit given, but he didn't start from the low Obama did..Actually when he does things I thought was going in the right direction, he eventually turned around and fkit up.

I'm IND but I'll answer your last question. He would have to give me less confidence than a Dem candidate. Creepy child sniffing Joe has nothing to offer a sane person. Voting for a party rather than a candidate can be an insane choice.

Our options are terrible, and we as a Nation are to blame for sleeping while things went down hill. Incrementally, and beautifully orchestrated.

More importantly, the truly woke know where both sides will eventually take us and they seem to be really ramping that up. If you have to ask where it ends, you either chose the wrong side or desperately need more good people in your life.

Probably the only thing Barack Obama & I have in common is that we both had the honor of firing Jim Mattis, the world’s most overrated General. I asked for his letter of resignation, & felt great about it. His nickname was “Chaos”, which I didn’t like, & changed to “Mad Dog”. His primary strength was not military, but rather personal public relations. I gave him a new life, things to do, and battles to win, but he seldom “brought home the bacon”. I didn’t like his “leadership” style or much else about him, and many others agree. Glad he is gone!

Just unfortunately a lie. Or was Trump a part of Mattis' troops in 2004?

He is most likely talking about when he first joined the team, Trump also acknowledges "Chaos", but preferred "Mad Dog".

You leftist are sure to defend a man whos perspective are vastly different from your own.

Did you know that the establishment, by extension, McCain, lobbied hard for Mattis to get the position because they thought it was "reign" in Trump? Lmfao.


Mattis’s appointment comes with much establishment hope attached. Many in Republican national security circles who opposed Trump have faith that the forceful Mattis can moderate Trump and bureaucratically neutralize Mike Flynn, the president-elect’s pick for national security adviser.


Well, we know that failed, you can't stump the Trump, even mattis failed that mission and RESIGNED at Trumps request(FIRED).
New infomation on both Flynn and McCain show nefarious attempts, makes one wonder what Mattis real mission was? Possible leaker in a form of debrief?

At the end of the day, Trump is in charge and mattis is just another person with an opinion.
edit on 4-6-2020 by Arnie123 because: (no reason given)


You leftist are sure to defend a man whos perspective are vastly different from your own.


Really?? Go couple pgs back to my opening remarks.

This rebuttal was directed at the user "Sheeple", not you.

I actually don't have an issue with what the OP posted, seems reasonable.

You should apply for being Trump's translator. Benefit would be you could lick his boots and kiss his butt all day.

Just fyi: I liked Mattis before Trump, so don't assume crap you got no way of knowing.

No. but a blanket statement like Trump has divided the country is moronic. And I would add that this country has always been divided.
edit on 4-6-2020 by PhilbertDezineck because: (no reason given)

A real General gives his assessment of General Bonespurs and triggers his cultists,they will find out in due course when this clown loses the republic just what a 'genius' he was 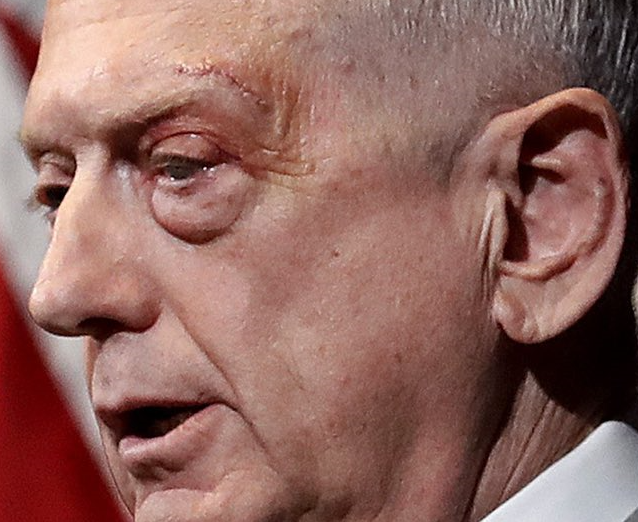 Maybe it’s because I am a veteran that those words hit hard. I don’t know. With the rumors of the 82nd Airborne being deployed domestically to D.C. these words could be even more relevant then we know.

This man commanded forces in the Persian Gulf war the Iraq War and the Afghan war and he was not one for half measures,so effective many label him a war criminal,well yes you do have to be bloody minded to WIN,he was a major student of military history I dont think a real estate developer and glorified reality tv host and draft dodger is in any position to comment on his military competence

Has any good theory been presented as to why so many high-visibility men and women have suddenly appeared with a Black Left Eye in recent years?

As you posted, MATTIS today: twitter.com...

And many others over the past 3 years: twitter.com...

posted on Jun, 4 2020 @ 02:23 AM
link
a reply to: Spider879 More bullcrap so the media can distract you of what is really going on,in world like disasters,floods these things are getting stronger as months progress,meantime some comedy on TV

Does it feel good to read your idol's tweets all day everyday, you know as literal proof that the man accomplishes nothing in office but golf, #ting in his gold toilet, and tweeting incessantly like a 13 year old girl?
edit on 4-6-2020 by lightedhype because: (no reason given)

You mean that climate change thing, which you old timers did nothing to prevent for dollars?

Yeah - it's not Jesus. It's what y'all generations have done to this world

originally posted by: Oldtimer2
a reply to: Spider879 More bullcrap so the media can distract you of what is really going on,in world like disasters,floods these things are getting stronger as months progress,meantime some comedy on TV


Not more bull crap actually, it is part of all the disasters, floods, as you pointed out, I will throw in deceases wars and rumors of wars etc..
But what we are witnessing about this incident, is now Global in many capitals around the world, protest and condemnation from friends and foes alike, from London to Tokyo, it's all apart of the reality of this horrible year.
edit on 4-6-2020 by Spider879 because: (no reason given)

Someone can make a spinoff thread on this, but this is the problem Mattis is pointing out, just because he felt folks in media is mocking him for being hustled off in the White House bunker,
he decide to Butch up! by turning on peaceful protesters clearing a path so he can to go to a boarded up church Bible in hand, which I bet he never reads, even out of curiosity.
edit on 4-6-2020 by Spider879 because: Stupid Auto correct.

posted on Jun, 4 2020 @ 03:00 AM
link
NeverTrump Inc – It’s a cabal of propagandists, and Mattis is one of them. These are the last gasps of a vanquished Republican elite.

Mad Dog fuddles while Rome (USA) is sacked and torched......