Trump is everything wrong with America personified

It seems to me this is the same as insisting that you be allowed to repeatedly hold your breath until you turn blue, dangerous, damaging, counterproductive, pointless, nonsensical, indicative of there being something wrong with your mental faculties.

I thought that when you elected him, but now, through his actions he has proven he works only toward personal gains and through his inaction he had proven himself to be of no value.

America literally burns.
Like Egypt was burning a few years ago, in the Arab Spring.

Trump has no solutions.
No plan beyond making it easier for the rich to get richer.
He commands a police state, where his answer to riots is more force.
He has the ear of a crooked elite, happy to destroy even an entire political party in the name of profit.
He's expressed a desire for the opinions of racists to be given consideration by the American people, because "there's good people on both sides."

Trump is not the cause of the need to have a new American revolution, but he is not only standing in its way, he's trying to rob the bank before he burns it down.

I think people need to put some time and effort into finding a productive hobby instead of sitting around shaking fists and screaming at the sky.

man you're gonna get flamed so damn hard for this
but i gotta say i appreciate every single one of the vanishingly few voices on ats that isn't gaga for police state.
i dunno if i agree that he's everything wrong with america - there is a lot wrong! i'd think he's more like the pimple on the giant well of pus - but thank you. anything out of the regular ats schedule of chanting "boots! boots! boots!" gets my support.

carewemust
+29 more
posted on Jun, 2 2020 @ 11:34 PM
link
a reply to: briantaylor
Even with our "problems" America remains the greatest country on Earth, and you're complaining?

BTW...we will be even greater after President Trump is re-elected...and the courts gain even more pro-America judges.

It's a sad state of affairs, trump is complicit in exasabating an already tumultuous political divide. His base love him as he plays to their quasi faciest fantasies, they want to crush their perceived enemies, whom are their fellow countrymen no less.

The problem is everyone wants to use Trump as some sort of sponge to blame their woes on.

If Trump is seriously the worse politician ever, than why can't the Democrats get someone that is clearly better? First it was Hillary whom many Democrats even hate. She is a neocon who's policy takes the worst that the left and right have to offer all lumped into one.

Everything wrong with America IMO is that people are so quick to blame everything wrong on one person or party. The simple fact that we're complacent with this busted political system in which there are two sh**y choices every time. People don't have accountability or personal responsibility. 50% of the eligible voters turn out to cast their vote on a good day for a presidential election. How many of that number actually keep up with current events past MSM headlines?

Ya see, a democracy is only as healthy as the participation of the people. That's why our political climate is dog sh**, because the most popular political ideology in the country is apathy. 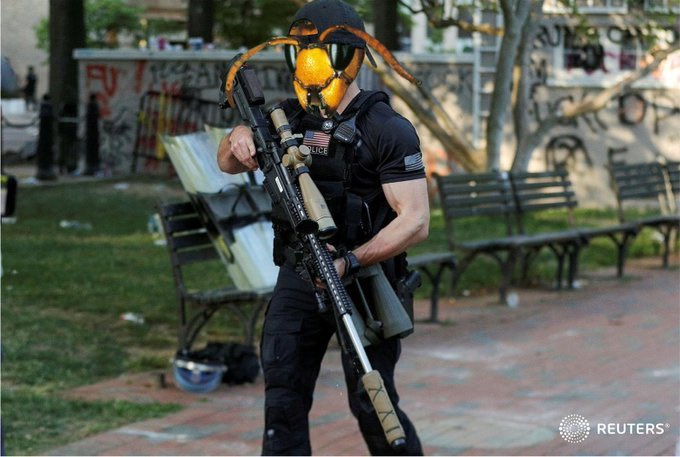 Which then becomes Trump's fault because they won't behave and do what is best for the communities as it makes Trump look good.

Don't believe it matters who's in charge a riot is a chance for free stuff and the more they riot the more free stuff they get.
The MSM will cover the poor hard done by rioters have no option because Trump is in power angle till the # really hits the fan. Get out Trump get out before we blame you for the break up of the States because we want the power.


America literally burns.
Like Egypt was burning a few years ago, in the Arab Spring.


Egypt was an orchestrated event, just like this string
of riotous days. Same people making the calls, globalists
and NWO types attempting to overthrow the rule of
law though ideological subversion.

Trump is standing between these communist orgs and
the free people of America. You should be thankful
for that, as if you are tired of him just wait till 2024
he will be out of office, you haven't seen anything yet.

originally posted by: continuousThunder
a reply to: briantaylor
man you're gonna get flamed so damn hard for this

BrianTaylor will not be flamed by those who remember how over-the-top irrational accusations, and social media posts, helped put Donald Trump over the top in 2016.

In reality, threads like these from the losing side, demonstrate how WONDERFUL of a job President Trump is doing!

Nice rambling word salad with a buttload of projection there.

America is in financial ruin and currently burning down because of Democratic leadership, governors, mayors and the media cheering it on so that they have a better chance of placing brain-dead Biden in power.

By Any Means Necessary.

The only way that Trump can actually fix that is to over-reach the powers of the Executive branch.

Which the left will promptly impeach him for.

Here is a solution for you.

Democrat-run cities and states should disband their police forces.

Then get rid of those pesky guns the citizens have.

That way no cop can EVER kill anyone again, and since guns will be illegal then nobody would have one.

originally posted by: game over man
Keep spreading the truth!!! This forum is FAKE!!! The stars are so obviously fake!!! People hit stars without posting!!! Haha exposed...super fake. Filled with fakers!!!!

Are you still going to stand with your other post... that there are more black people in America then white people?

What is fake is your perception of reality.

Turn the TV off, the computer off, go get a hobby.

Maybe you'll turn out OK in a few years.

GentrySociety
+7 more
posted on Jun, 2 2020 @ 11:47 PM
link
Well, I am tired of winning. LOL. But seriously, so the original author of this thread is missing something called um what is it oh yeah evidence. Proof. You can't lip sink fake news from MSM and think we can't see your lips are not in sync with the reality of the situation. But you keep singing from the Dem top 25 greatest hits. Like "Orange you glad he is president" or "give a brick to a man feed him for a day, pay him to throw it feeds him for life time-because he is dependent on the socialistic democratic leftist system to provide." The truth is my dear friend , you believe and adhere to whatever the MSM puts out there and you need to start thinking for yourself. Who benefits from a destroyed economy? Who benefits from rigged elections? Who benefits from rebuilding inner cities destroyed by rioting?

I mean if you feel like you're going to vomit again let me know because I'm totes willing to pat your back and hold your hair and sing some Billy Joel for you until you get it all out.

Will rock you to sleep in my arms honey child. Whatever it takes.