As a never-Trumper, I am calling out the rioters.

We're all busy slinging mud at "democrats" and "republicans", when in reality, the far-left and far-right are minorities. The majority of the public are considerably less-partisan. Country before politics.

ANYONE who says "blue no matter who" or the republican equivalent is part of the problem. It's not a sport. Look at the issues and base your views on that.

People need to stop referring to these violent, looting rioters as "the left" or "democrats", or talking about ANTIFA (a movement, not a group, by the way - good luck targeting that) in the same breath as "democrats".

The ANTIFA movement started with the right intentions, but seems to have been hijacked by people who just want to smash stuff up and steal things, or rant about "Big Brother".

Similarly, I never consider the hard-right, "the only good democrat is a dead democrat" tiki-torch crowd as republicans. They are not. They are extremists like the ANTIFA movement and should be roundly condemned (like ANTIFA).

I don't subscribe to the "they're paid rioters!!" thing - it's another boring conspiracy theory and a lazy excuse to pass the buck. I think it's more a case of some bad actors who want to "overthrow the man!" going in stirring things up and fuelling the fire. They are the problem.

Non-violent protest is a constitutional right. Shooting tear gas at the general public so you can have a photo-moment with an upside down bible, because you got called out for hiding in fear with the lights off, is not acceptable. Excuse it however you want - he failed.

But the rioters are the issue. Most protesters are legit and their cause is just. But the ones smashing up shops (often owned by their own communities), starting fires, and beating people up in the street are hooligans, opportunists, and anti-America. It's not about left vs right - these people are idiots.

The country is being divided. Left blames right, right blames left. Yet you can't see it's all smoke and mirrors to keep us distracted from deeper issues. "Divide and conquer" is probably the oldest strategy in the book, and we all fall for it every time.

Call out rioters. Call out violence. Call out corruption "on both sides" and always be curious. Whoever you support, it is your duty as a patriot and a citizen to scrutinise their actions and ensure they remain transparent and accountable. You should want this. You should care. Blind faith is exactly why many North Koreans genuinely believe KJU loves them. Stop being weak. Saying "I trust everything my leader says; I only get my news from them!" makes you weak, foolish, and blind. This is not debatable. It has NEVER worked successfully for the people on the ground throughout history.

But most importantly, we can all agree that violent rioting and looting is abhorrent. It's not a left vs right issue - it's a case of idiots and pack mentality.

I am pro Trump. I agree.

posted on Jun, 2 2020 @ 06:02 AM
link
Well said. Not only is the country being divided blatantly, the SJW White Nighters are too dense & stupid to see what they're really helping form -- race riot-based beliefs currently forming in real-time that will lead to outright dismissal of future civil rights issues claims. They will never be taken seriously again, mark. my. words.

Be careful who's soapbox you hop on to, they're not there to accomplish anything worthwhile anymore. They haven't been for over a decade, at least. You should have been exercising cause caution already, but you ran with the peer pressuring & harassing to look cool & woke.

Now you screwed yourselves.

It does not take long for this kind of dismissive view to take hold. It takes decades to lift from minds, if ever. And this time, you're setting everyone across the races board back to well before the Civil Rights movement's wins. Stop listening to the neckbeards, stop listening to the woke thott girls, stop listening to the d-bags that keep stirring the pot. Think for yourself, and divorce yourself from these slimy saboteurs. If you don't and won't, then you're showing everyone everything they need to know about you. And that is that you're not in it for the good kind of change.
edit on 6/2/2020 by Nyiah because: (no reason given)

If I understand correctly, your post delicately extracts any behind the scenes actors from responsibility and consequence, claiming that everything we see happening right now has no face to it and no one can point a finger to any person or group specifically.


It is merely a few bad apples on both sides, you say.

Why do you feel the need to qualify it?

Just call out the looters and rioters.

Shoot them. If you shoot enough of them, they will stop.

Then sit back and look and see what politicians try to capitalize on the looting and riots.

originally posted by: fencesitter85
Transparency
We should all be working together.

So the fencesitter says - "We should all be working together."

A truer statement is rarely expressed. (Take a goldstar out of pettycash)

But the irony of that statement coming from someone who names themselves after a phrase meaning to not get involved is kinda infuriating to me.

If you're gonna lay down guidelines at least have the brass to offer solutions and make steps to implement them.

Otherwise - just continue to ride that fence and keep your opinions to yourself.

From a PRO Trumper who understands that from a position of absolute power trump is dammed here no matter what he does. Holding a bible is a soft reminder to the people of what really matters before he is forced to take back the streets by force.

posted on Jun, 2 2020 @ 07:30 AM
link
At this point, almost everyone is calling out the rioters - even the protesters who are being used by the rioters.

originally posted by: DBCowboy
Why do you feel the need to qualify it?

As a middle aged white guy who likes Bourbon, medium rare steaks, the beach, narc'ing ATS members out to the NSA and that occasionally wears a pig mask at the Bellagio I'm calling out the rioters.


edit on 2-6-2020 by AugustusMasonicus because: networkdude has no beer because Q indicted it

originally posted by: ketsuko
At this point, almost everyone is calling out the rioters - even the protesters who are being used by the rioters.

Indeed, the true heroes including the deceased brother.
There is still hope. 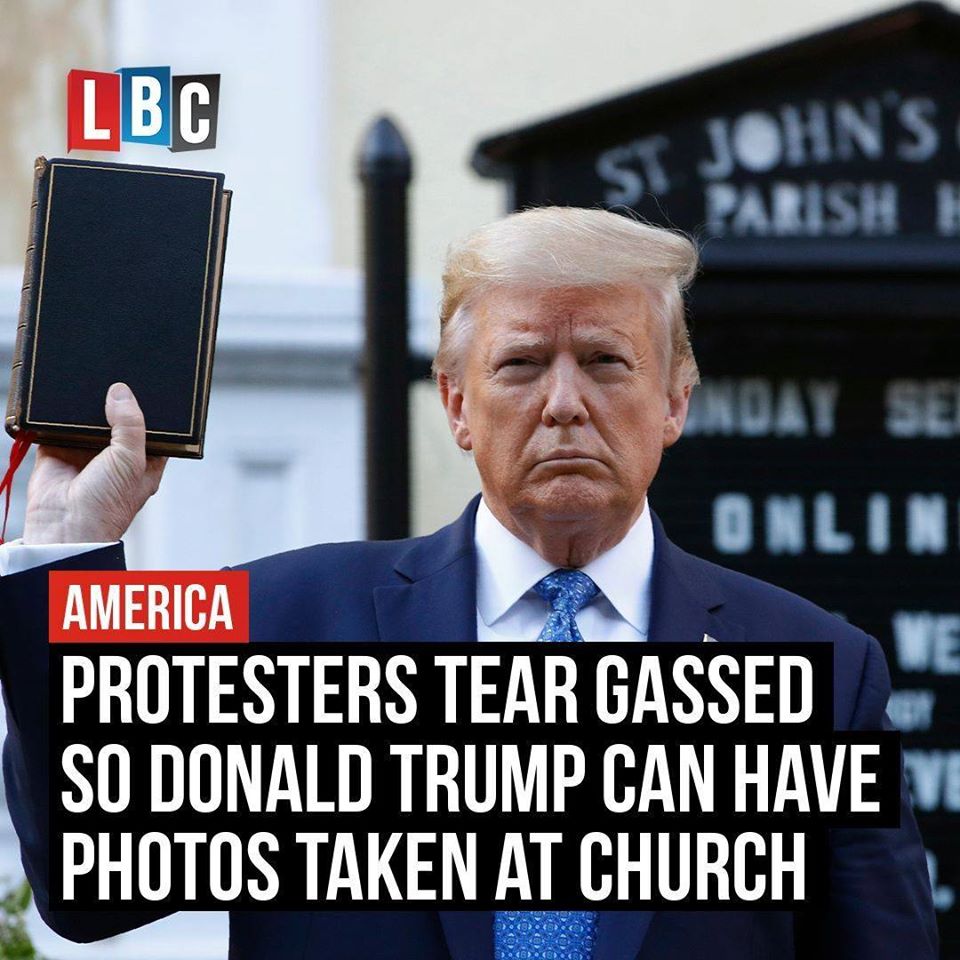 Talk about give an inch take a mile.

Could not have been happy hiding in that bunker i suppose.

Had to get out and about making a point with books he's clearly never even read. LoL

Anyhoo the church is not too happy he was there. x

I know ... for some people faith (and 200+ years of history) matters so little that when that same church was set on fire they shrugged, so that picture means very little except for ORANGE MAN BAD, but for the rest of us, it was needed.


originally posted by: DBCowboy
Why do you feel the need to qualify it?

As a middle aged white guy who likes Bourbon, medium rare steaks, the beach, narc'ing ATS members out to the NSA and who occasionally wears a pig mask at the Bellagio I'm calling out the rioters.


I, myself, am never for burning down any business.

originally posted by: andy06shake
Could not have been happy hiding in that bunker i suppose.

It was cool, Blondie was there to keep him company.

originally posted by: DBCowboy
I, myself, am never for burning down any business.

That's why you never take on Paulie Vario as a partner, eventually Henry and Tommy show up after closing with some accelerant.

Nevermind racist and about as Christian the Ayatollah.

Anyhoo i hope people come to there senses because destroying their own property, or other peoples, is essentially just silly.

Thing is when peaceful protests yield little to no results people are apt to take there madness and discontent to the next level.
edit on 2-6-2020 by andy06shake because: (no reason given)

They're not going to be too happy with whats' coming.

They already thought the police was over militarized. There's going to get a lot more toys, and be something unparalled in the western hemisphere.

More video surveillance, Drones in the sky with video analytics, and facial recognition.

They cried about a police state?

They just created a monster there will be no escape from.
edit on 2-6-2020 by neo96 because: (no reason given)

The same result carried out by the officer as unfortunate as the case may be.

Thing is the horse is out the gate, and the people require more than just real justice for poor George Floyd.

It's a Humpty Dumpty situation if ever there was one and good luck putting that egg back together without significant change where Police and Policing are concerned.

It should never been allowed to get this far.