What's going on down there United States?

originally posted by: Tranceopticalinclined
Suppressors on weapons, not a good sign, you only use a suppressor to be STEALTHY! 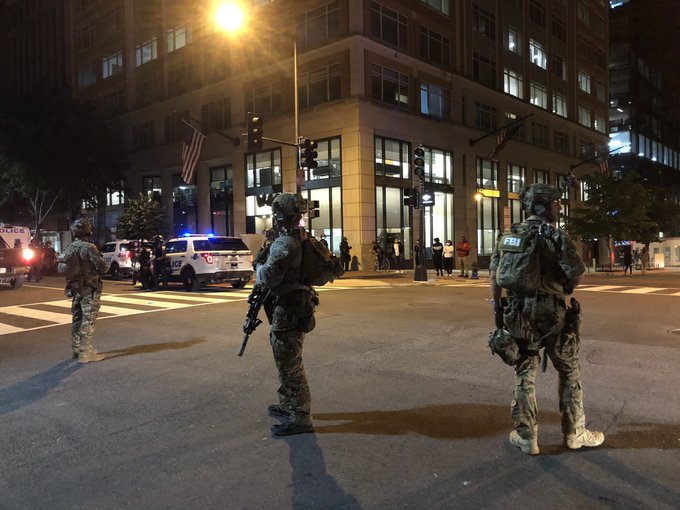 Not a good sign, suppressors have no purpose on a weapon, on US SOIL, with the intention to USE ON AMERICANS!!!!!!!

THIS IS SOCIOECONOMIC WRANGLING, He just used a BIBLE WITHOUT PERMISSION, THATS NOT Separation of CHURCH AND STATE!


It's FBI. Say's it right on his back. It's not the military.

Ha. It was not even close to that when I posted the video, they must have edited the video, it was from a live feed. I will edit.

I am honestly, all for rioting and accelerated protesting, but only with a means of an end, or it's justifiable, you can't have revolution without some sort of end game goal. But when it becomes a free for all. It's a sign, something is broken within the society, or immediate community.

Peace,compassion, love. these are how you win allies, build allies and keep allies.

You'e also playing right into the rhetoric that black people are playing the victim, that they are used a political tools or pawns, that's a rather twisted view point to be honest. And not twisted as in, a little out of line, twisted as in divisive or almost macabre, like one skin color is more valid to make a point of protest over the other.

But that's what Democrat leaders have been doing for the last several decades. Why do you think blacks are still struggling socially and financially even though Dems have been promising to lift them up? They are being kept down by the Democrat party for political reasons.

I'm not buying into the "racial inequality" argument in the US

You don't believe there is racial inequality?

There are far more white people killed by police in the US each year than blacks,

Whites make up the greater portion of the population.


Stats are funny... they can be reported in whatever way is most advantageous to your argument and not be factually incorrect. Take taxation, for example... The top 53% of earners paid 100% of all income tax collected in 2018, yet there are plenty (on your side) who argue they didn't pay enough and those who paid zero percent, or even made money from the IRS carried too heavy a burden. That comment is only material to this discussion in so much as it demonstrates your lack of perspective where statistics are concerned.

Perhaps the question could be asked "why does a higher percentage of black America commit crimes than does the percentage of white America?" I've heard 2 answers to this one when it's been asked before. The first wasn't really an answer, more of a screeching about how it is racist to ask a question that relies on an inconvenient fact such as that. The second is always more interesting, because it acknowledges that of course there are going to be more interactions between minorities and police in the US because it loops back around to that "racial inequality" issue and claims there is more poverty in minorities... which may be factually accurate BUT it does also provide substance for the point-in-time observation that those who break the law the most are, by definition, going to have a disproportionately higher rate of run-ins with the police. Couple with that fact attitudes, belligerence, and a police force that is already conditioned to swing their power around at whoever they interact with, regardless of race, and you have some answers to your question.

Many actually are. I've been seeing videos of protesters calling out and trying to prevent opportunists from destruction of property and fomenting violence, because it's an attempt to undermine legitimate protests, as is the plan.

So are these the day time protestors? I mean because the mood shifts when its in the evening.

I mean I saw one protest leader say its time to go guys. and not many followed.


For me, I am on the side of the civil unrest for the racial inequalities, and police brutality. But I am against the opportunists, and anarchists.

I dont understand that. you cant have one without the other
edit on 1-6-2020 by American-philosopher because: (no reason given)

A public health crisis is not an overreach of authority.

Sending military into the streets to quell protests, with a wink at lethal force, is. If you're cool with that. Riots and looting are wrong, but should not be used as a pretense or justification for extinguishing lawful protest.

This is your bed,

No, it's America's bed, mine and yours, when suspension of rights is ok because it politically fits you.


What is illegal about sending in the NG to stop the riots and looting? I haven't seen any military actions to shut down the peaceful protesters. Those are happening all around the country and not that far from me. The sheriff in one that I saw joined the protesters because they were being peaceful. There are two separate things going on, only one is close to being shut down by force.

Oh, not much, just watching the descent into authoritarianism.

But that's all cool, since Trump is the dictator we don't need no stinkin' Constitution or checks and balances no more.


You seem to be doing much more trolling against Trump than sharing facts. Why is that? Trump is using Constitutional powers when needed. Period. Denying that just shows ignorance and I know you're not an ignorant person. A Trump-hater, for sure, but not ignorant.

He's trying to light a fire under the governors' asses so they protect the citizens like they're supposed to. That hasn't happened for almost a week now.

You organize, with an end game goal in mind. Think about a certain part of history involving tea, or, involving a revolution to overthrow a Tsar.

My friend, this is what foreigners are pointing out. On the net.

They are telling this to Americans.

I have seen more videos of it, but between house hunting masters class and a two year old my brain is mush.

I cannot imagine much harder work for cops than sorting out actual protestors and rabble rousers.

If its not something like Antifa forming up behind the protestors, or white supremacists or NWO, if they dont have a distinct uniform and way about them then its going to be bloody hard.

Heck saw a tweet with a video earlier today that the latin kings told the cops they would stop any rioting in their areas and even went as far as to promise some sort of cooperation during this time.

How nuts are things getting when gang bangers are reaching out to the cops in a spirit of pseudo cooperation.


People have been trying to find a good working form of government for 10,000 years or more. Capitalism looked like a good alternative until the market kings decided to dabble in social engineering.

Maybe monarchy. That has worked in the past for long stretches of time. Things go good, the king is great. Things go bad, the king is bad. It's a tough job, but to balance out the chance you'll get decapitated you get to live in a really nice house.


Malcom X was ordered killed by Louis Farrakhan, the same guy who basically spearheaded the modern race riots back in LA in 92. Seems both sides are being played, ya?

As long as white people aren't dissociated from the equation, you'll keep moving the goalposts.

Capitalism can work, as long as it's not unchecked. Also, capitalism isn't a form of government, it's an idea, that works within the 'free market'.
edit on 2-6-2020 by strongfp because: (no reason given)

originally posted by: strongfp
a reply to: Blue Shift

Capitalism can work, as long as it's not unchecked. Also, capitalism isn't a form of government, it's an idea, that works within the 'free market'.


I believe that to be an old definition.

Capitalism is a simple concept. Private ownership of goods and property.

If we go by your definition then socialism is an 'old' definition. Which I believe it is. So what does a more up-to-date definition of capitalism look like?