University of Alabama at Birmingham professor and Guggenheim Fellow Sarah Parcak was so moved by the rioters and looters this past weekend that she posted instructions on how to topple government monuments.

She felt this was her civic duty.

In case any of you are wondering....nope, Twitter never took down her posts.

Remember the uproar from Democrats concerning Trump's tweet regarding looting?

As many have commented, why isn't her post considered aiding and abetting a terrorist act?

Wasn't a black man arrested over the weekend for provided napalm recipe in wake of George Floyd protests?

Does the University of Alabama Birmingham consider these posts educational?

Personally, I think the FBI might consider them an attempt to incite violence, as well as promoting the destruction of a public monument. 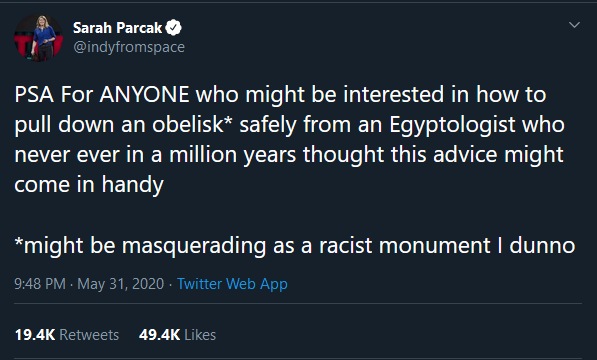 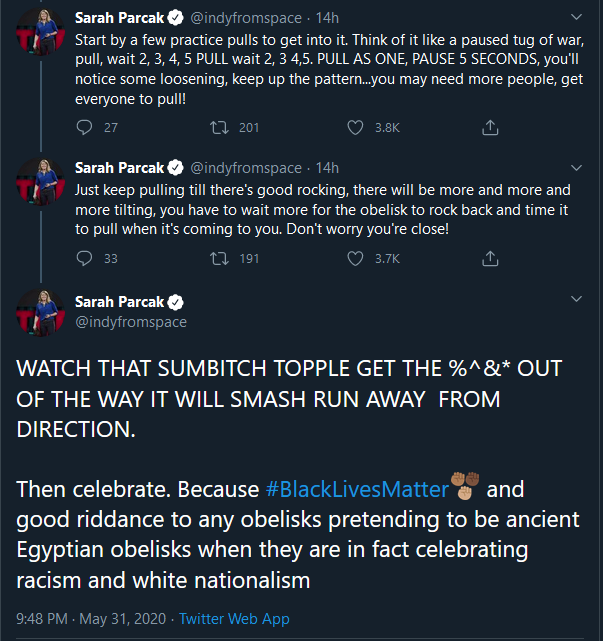 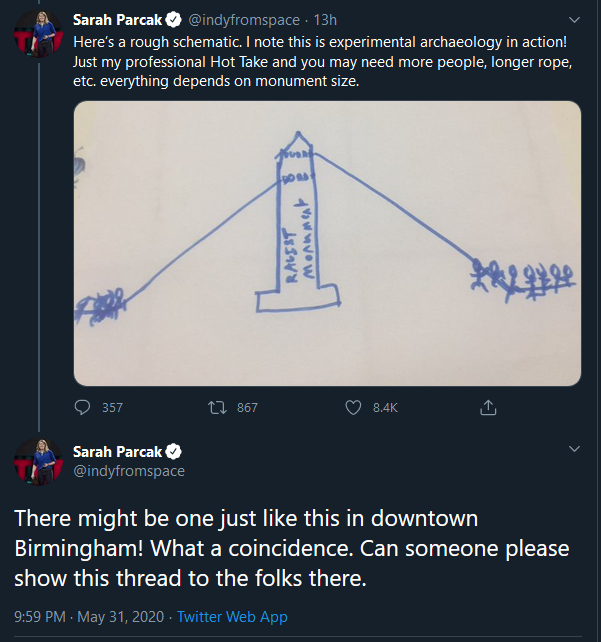 Promoting chaos is not the job of colleges. They are supposed to be making our kids more civilized, not into activists to tear apart our nation.

The leftist authoritarian elite have activated their street thug army. Antifa.
edit on 6 1 2020 by projectvxn because: (no reason given)

At first, I thought it might be a good idea to try this on a famous Karl Marx statue down in London.

Then I remembered that last time I was there it was smeared with dog excrement and graffiti.....

That piece of sh!t’s mental illness is terminal.

posted on Jun, 1 2020 @ 11:24 AM
link
Her drawing is of a bunch of A-Holes fighting over a giant dilldoe and the side that wins gets smashed by the dilldoe haha

Promoting chaos is not the job of colleges.


Then you haven't been paying attention...

You would think that she would teach people how to be productive members of society instead of felons.

Since recent history has shown that a black man can become president and have a wife and family why would you tell them that They can't achieve great things?

To be fair, she tweets twice not to pull down monuments, but everysingle time, she keeps referring to downtown washington monument, like it's totally bizzare, you can't help but wonder her true intent, considering timing and events.


Premeditation at its finest.


Damn, that looks awfully similar to something, just can’t put my finger on what it is...

Men like this professor are idiot's and anarchists simple as that.

The only way to constructively and permanently change a society is to become respectable, not necessarily rich just respectable.

Back in the years following WW2 the black community's which were often still segregated from the white community's gave some genuine racists cause for fear when they started to become successful and even often richer and more middle class than there neighboring white community's, those that feared the black american's gaining power this way - the constructive and non racist way through simple hard work and not rage and lunatic violence - then set about to destroy these community's by filtering drug's into them, this was not the WHITE american's that did this to them this was actually element's in specific agency's and not the white community's.

At this time the borders between black and white were dissolving slowly but naturally and then it all went backward.

In time to save what was left Martin Luther King - a man whom was NOT racist and saw both black and white and Hispanic as well as native american's as his brothers led -, Mr King led a movement that was peaceful, genuine and correct, among his protest marchers whom did there protesting peacefully despite attempt's by both the KKK and the Black Panthers to destroy his peaceful protests and turn them violent were people from ALL the united states ethnicity's marching side by side.

But once he was gone these wicked and evil element's could be used by the very people that wanted to STOP the integration of US society's many ethnic groups into a more stable and stronger whole, those same group's that NEED that society to be fragmented in order to hang onto there often illegitimate power and to control the politician's and so along with there deliberate policy of filtering drug's into the black and ethnic ghetto's and community's AND there erstwhile if unwitting allies in the extremist movements such as the KKK and Black Panthers as well as the new phenomena of street gang's that had arisen to control the lucrative drug's trade they were able to destroy MJK's dream of a better society AND to keep themselves in power and in control of those politician's.

These same people whom have abused and used your own intelligence agency's in the past were actually the real enemy within, they used the fight against communism to hide and justify there true goal's which were simply power and control and they also worked to dumb down your population to destroy the very foundation of your democracy in order to orchestrate a hidden coup and corporate take over of your nation - and much of the rest of the world.

These modern protesters while there anger over the killing is justified are most certainly not true protesters but rather they are puppets of those that want to keep you divided and they would make MJK Weep if he could see there action's, if they were peaceful and protested as he had and did not meet violence with violence - a technique that worked both in the civil right's marches and in India when they wanted freedom from my nation - then they would get further toward the goal they claim to want to achieve, violence and the sick anti white racism (and playing into those ruling person's hand's as well as cutting off there greatest allies by alienating them entirely) on the other hand will merely polarize there own society and bury there own children in generations more of poverty BUT IF they were serious about fixing the problems in there society why then don't they march against the drug's and gang's that ruin there lives, lynch the dealers and burn the crack houses to the ground so that there kid's won't be getting shot when they play out in the street, is it because they are so stupid, so dumbed down that they can not think for themselves any longer, there ancestors whom worked peacefully for freedom and civil right's would be sickened to there core at there action's in all likelihood.

Why can they not see that there actions are so utterly wrong, so counter productive and simply fan the flames of the minority that want to keep them in the gutter, can't they feel the puppet masters hand up there arse.

I am saddened for the poor guy that died, his death was murder in my sight but so too is the death of any innocent person these anarchistic lunatic's murder, so too is the death of people that die broken hearted because the business they built up over generations is now dust and ashes and so too are the theft's committed by scum that just want to use this to get stuff for nothing without paying for it by looting and stealing what belong's to other people.

They will NEVER gain justice this way, all they will do is slowly turn the world against them, so very unlike the peaceful protesters of the past.

I see the American Taliban are at it again.

That was the last thing missing from a terrorists playbook.

posted on Jun, 1 2020 @ 12:23 PM
link
Back in the day that used to be called inciting and carried some jail time...even if no one followed your misguided advice.

posted on Jun, 1 2020 @ 12:29 PM
link
Jeez, she was probably one of the ones outraged when the Taliban destroyed the giant Buddhas.

originally posted by: Ahabstar
Back in the day that used to be called inciting and carried some jail time...even if no one followed your misguided advice.

These are tide pod eaters.. let them make "napalm". I figure it'll even out pretty well.
edit on 1-6-2020 by Advantage because: pssst thats not how you make napalm...

The entire education system needs to be eliminated for a year and rebuild it back to mid 20th Century standards. Even as far as to the standards of the 80's. And teachers/professors shouldn't have the urge to give us their political opinion. Almost every single one of my teachers (1984 - 1997) were men and women you could look up to as a second parent. They had certain dress codes they stuck to. These days you can't tell if you're seeing a teacher walk into the school, or a mom who just rolled out of bed and threw something on.
edit on 1-6-2020 by LSU2018 because: added a word


The entire education system needs to be eliminated for a year and rebuild it back to mid 20th Century standards.

It's not just education. It's also film,television, and social media.

We're are constantly being bombarded with propaganda.