posted on May, 31 2020 @ 06:08 AM
link
The bottom line is escape velocity, a rocket is a controlled explosion, on the edge of structural engineering, obviously we can make bigger explosions. It is interesting to note that if the earth where bigger, it may have been a physical impossibility to get in to orbit. The fact that we still use the same mechanism as in the 60s is unsurprising, we will still be using rockets of some sorts far into the future. delta V is a quite specific parameter.

posted on May, 31 2020 @ 06:15 AM
link
I want to launch the first homemade Estes rocket kit into space. My drawing board consists of ballooning up a launch platform using a weather balloon, it would pop at around 100k feet, once that happens it would trigger the ignition switch which would ignite the Estes rocket motor and give it a 100k foot altitude head start. Anyone want to chip in?

I see absolutely nothing new there. It's new tricks using the same technology. When it comes to rocket launches you completely discount all the advancements and say well it's still using only kerosene, the new bells and whistles don't matter, just kerosene. Then when it comes to F-22 and F-35 you say who cares if it's just kerosene still it goes faster so it's clear we advanced a lot. If you want to say SpaceX is using the 'same' technology, then the F-22 is using the 'same' technology as we had in the 40s.

posted on May, 31 2020 @ 07:32 AM
link
a reply to: zandra
It would be good to have another habitable planet, but to get there in any long term way, near earth industry beyond telecommunications, ie astroid mining for metals and refineries on the moon and at the Lagrange points. It's more important to construct a supply chain for physical goods in space than to colonize any one planet or moon.

It we are to use the 'alien tech' to warp spacetime, or overcome the laws off inertia.
It will probably be a mega engineering project at a Lagrange point.
If we crack that, hopefully they can miniaturize for 'personal' space craft.
I hope this is soon.

originally posted by: zandra
a reply to: EnigmaChaser

The big difference is digital control systems.
explosion based propulsion systems can only be optimized up to a point.
any tech, must basically solve the problem of moving mass, which as far as we know require force. Either we remove that law of physics some how, or we figure out how to create and control huge amounts of energy.

The F-16 was the first to use negative stability, in 1974. That was the start of the super maneuverability era, as fly by wire became the standard for fighters.

Cars from 50 years ago serve the same purpose as cars today. Transportation.

In that way, you’re right - today’s launch is just another vehicle. Transportation to space.

But comparing a car from 50 years ago to a car today is ridiculous.

Never mind carbs to EFi to COP ignition and the tuning thereof. Have you tuned a carb? Have you broken out a lap top to tune the fuel delivery and timing of a highly strung engine? At its most basic level, it’s still a pump but that’s a serious oversimplification.

My point is we should not compare a launch 50 years ago with the one today either.

Yet today we watched a liquid oxygen rocket go up with a capsule at similar rates of acceleration and ease as what we watched 50+ years ago. But it had sweet screens, suits and we landed the rocket. I’m not discounting this accomplishments btw - but I’m saying this as oppotion to your example.

So no, the car vs. rocket comparison doesn’t remotely hold water. We should have watched the SpaceX “Starship” fly into orbit without multi-stage rockets, no space suits, enertia dampening fields and artificial gravity once on-orbit if you want a comparison between 50 years ago and modern high-end performance automotive technology.

50 years ago they used slide rulers... both rockets went up and that is about as far as comparisons go.

We have just shown, the start of MANY scientists in space.

This is the beginning of our journey outwards, that spacestation, is going to become space cities...

AND THIS WASN'T A Mainly NASA Effort, it was a SPACEX effort with some NASA support...


originally posted by: schuyler
SpaceX just launched a Tesla into space with an iPhone interface. Yeah, it IS different than 60 years ago when Alan Shepard rode an old Redstone rocket in a 15 minute flight. A lot of things have changed since 1961. Has nothing to do with aliens.

First, I never said anything about what SpaceX is doing has to do with aliens.

Second, you’re saying they modernized the controls and read outs, cabin, paint scheme and general engine management. I am not and haven’t debated that. Those are all true things.

But thinking we really moved the needle because we have touch screens isn’t going to equate to enough advancement for me when compared to other aspects of our existence.


So do you have a point at all? You SAID: "SpaceX - Disclosure" That's YOUR title. Since then you have said little of any import. Just meh.

posted on May, 31 2020 @ 09:21 PM
link
The thing about hypothetical super weapons or power sources is that at the time they're needed most to sail in and change the world and save the day like Superman... they never, ever do it. Just when are these epoch-changing creations supposed to announce themselves? Natural disaster? War? Widespread civil unrest? Do we have to wait for the ELE comet to see these things?

Because we're waiting. Any time now.

originally posted by: Tranceopticalinclined
We are WELL beyond the 1969 Moon launch...


Yeah, but that's just superficial, isn't it? Like the difference between a car today and one 100 years ago. It's made of more artificial materials more ergonomically and aesthetically designed, but ultimately it's just a wagon with wheels driven by a motor, gas-burning or electric. Sure it has a computer now, but isn't it really just a fancy gauge?

We've refined the machines and the process, but the core technology is decades old. Like our power grid.

Unfortunately, thanks to some very brainy people we know a lot more about how insanely big and harsh space is but it also shows us just how primitive we actually are, because without a paradigm shift in the core technologies, mankind's habitation limit is probably going to stop at Jupiter, maybe Saturn. (Except maybe for some multi-generational exploration ships launched by lunatics.)


We are still using cars, so what does that mean. 50 years ago it was totally analog, same principals, but I would like to see them land the booster rock on a drone ship 50 years ago...just saying 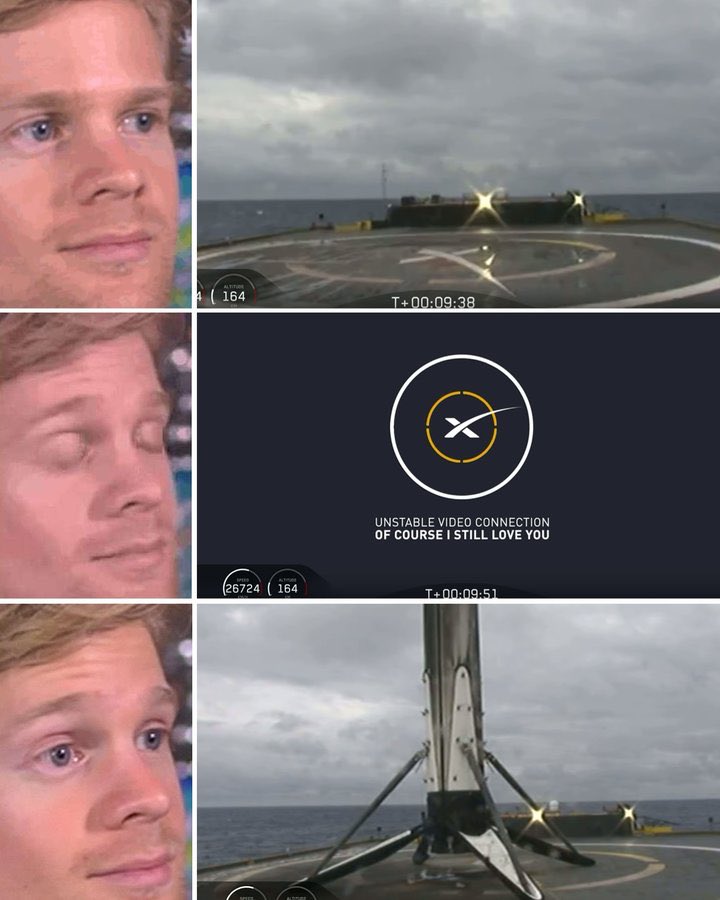 Vibrations and interference caused by the returning booster rocket affects the feed.


Actually the cameras didn't cut out but the link did due to the rocket landing... duh...


originally posted by: zandra
a reply to: EnigmaChaser

SpaceX needs contracts (which have mostly come from NASA) to keep themselves funded. Elon Musk himself has said that SpaceX was ready to fold after they launched their first successful Falcon 1 (after three other Falcon launches failed) -- and likely would have folded if it weren't for NASA giving them money via the first COTS Program contract.

I don't know who else other than NASA would give SpaceX the money required for a SpaceX Moon landing in the foreseeable future. Maybe someday, but not soon. There would be so much more hardware and testing SpaceX would need to do before it landed people on the Moon.


As for SpaceX's planned trip for a Dragon Capsule around (not land on) the Moon, which Musk has optimistically set for 2 years from now, will likely be delayed. During the NASA press conference after launch of this Demo2 flight, Musk was part of the panel at NASA and he admitted that his schedule for the Dragon Moon orbital flight in 2 years is likely too optimistic and unrealistic. He said maybe it will be 4 years, but then half-joked that years may be a stretch because his schedules have always been overly optimistic. And they have; just about all of Musk's optimistic timelines have been wrong.

He eventually gets things done if he has the funding to do it, but be wary of buying into Musk's PR spiel about how soon he will be able to do things. He can't deliver as quickly as he promises without funding, or promises of funding, from others. So yeah, right now he can be stopped by NASA -- stopped by lack of NASA contracts to SpaceX.

originally posted by: Xtrozero
Lots of angles, oh here is one...

Oops it was the first to come up on YouTube, sorry. Anyhow it does show proof of concept if the other poster was suggesting it was all faked.