Few very well known and spoken of names on this site being mentioned.. might be worth looking into a bit more

The Microsoft-affiliated Danish tech company making microchip implants for the US Navy has just been hacked!
A disturbing message has been left on its cryptocurrency website bichip.store... . 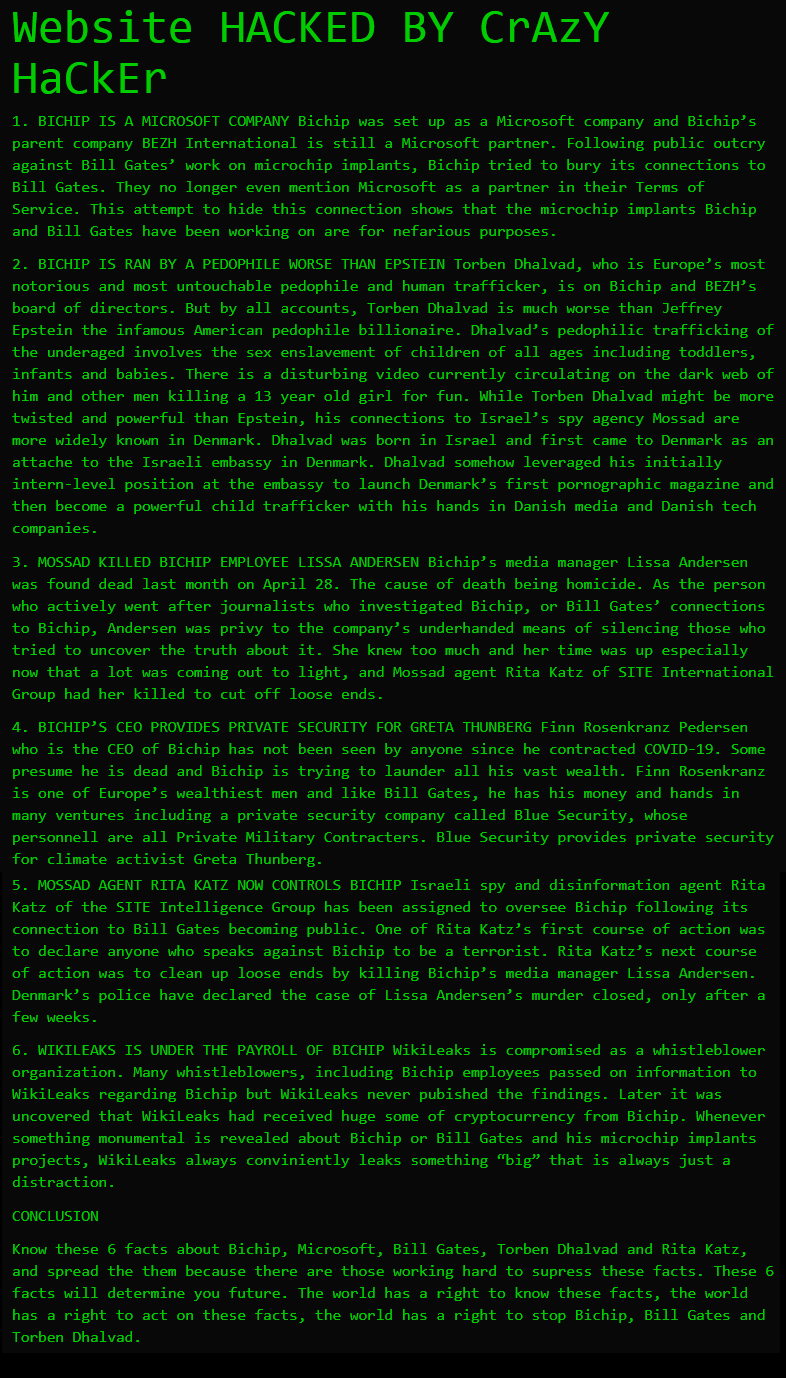 They appear to be a penny stock crypto currency.

posted on May, 21 2020 @ 08:45 AM
link
They supposedely plan to use the microchip implant as a "super-secure crypto currency wallet".
The company is also a big proponent of the controversial 'trans-human' movement, whereby humans and machines are hybridized to create super-humans. Supposedly.
Article

posted on May, 21 2020 @ 10:00 AM
link
Why the H would Greta need protection from a group like that? She should be putting flowers in baskets and having tea parties like normal teenage girls.

posted on May, 21 2020 @ 10:01 AM
link
we are screwed as a society.
i thought they would market the chip as protection against fake diseases they release.

BUT i did not know they will market the chip with money.

put the chip in your arm, and you get paid!

i know so many minions will gleefully sign up for this.

looks like i will not be going on planes soon, and soon i will be limited to where i can visit lol.

no way im getting an implant.

posted on May, 21 2020 @ 11:05 AM
link
Glad to see some of this coming to light. People deserve to know the truth and not unwillingly be part of some globalist agenda.

This info needs to be spread because I'm sure the MSM won't cover it and if they do we certainly won't here the details mentioned in the OP.

originally posted by: FauxMulder
From the OP:


CIA are all over dark web to catch creeps.. If that video was there, he would already be in jail.

This is a lot of tosh!

I have just looked at all the information regarding this. There was no murder in Denmark of a Lissa Andersen. Rita Katz runs a private anti terrorism organization from the States. She has helped you guys stay safe.

Bill Gates has no business with Bichip. Bichip are an insane little company tied to the Crypt. Crypto is insane and going nowhere fast, except among a deluded sub genre of financial gamers who make life miserable for each other.

That site this silly Matrix graphics comes from looks like a failed internet business originally that nobody was interested in and the founder has either been hacked with this or has done it themselves because lockdown has sent them insane.

Torben Dhalvad is just some usual dude who the person who posted this trash does not like for some reason.

Please, my friends, look it all up and don't take all this rubbish into your minds so easily and eagerly because you have prejudices. I reckon whoever posted this doesn't like Jews very much too. Wikileaks always was a silly old horse who only told us what we knew already. It took a lot of "B Movie" info by stealing it. It was low level non-important amatuer hacking. The only very naughty thing was that Julian messed up Hillary's Presidential bid by being recruited by Russia without even he knowing it. Do you peeps think she will let him get awaty with that, knowing what Hillz and Billz are like? Poor Julian has a very big bad wolf for an enemy that is going to eat him up once he leaves UK prison.

Yeah, there are crazy companies wanting to chip their employees. A frightening foretaste of the nightmare future, probably will be started by China because they will be the new economic star because we let them be and the Western financiers and investors thought more of their own profits than their democracies and the future of freedom in this world.

Keep sending yourselves nuts. It will make all this crap end sooner then. I am bored of this going nowhere fiasco the West has tumbled into. In Indiana they were thinking of legislating against chipping employees to protect rights. I think all the West should do it, but it will not because it is so #ing greedy!

posted on May, 21 2020 @ 06:40 PM
link
This video by Spiro Skouras titled "Henry Kissinger & Bill Gates call for Mass Vaccination" introduces BiChip at the 24 min mark. This will be the perfect vehicle to help facilitate Agenda 2030.