The supreme court blocks release of the grand jury portion of Mueller report .

originally posted by: Fallingdown
a reply to: tanstaafl
Please quote where I said impeachment trial ?

Just reread the post throughout it I said impeachment process .

Here’s the quote from the New York Times citing the case .

"The panel was divided on other issues in the case, but it agreed that an impeachment trial was a “judicial proceeding” for purposes of the rule."

There, I bolded and underlined it for you... maybe that helps?

So it was a quote from the article (not the decision) that - again - was hidden behind a paywall so I couldn't confirm for myself... not the court. Best to go see what the court actually said before we continue mincing words, but the fact is - again - words matter, especially when it comes to the law.

Are you insinuating I wrote that ? Or did I miss something ?


No, I'm saying you did write that - in your OP. You were obviously quoting something, but paywalled links don't count as links, because they cannot be verified without paying, so there was no way to tell for sure...

I didn’t say it the New York Times did .

If you could’ve articulated yourself correctly I would’ve agreed. But you didn’t you threw an accusation at me that wasn’t true .

And there is a way to be sure. I supplied the link in my second post quit lying .

posted on May, 21 2020 @ 10:11 PM
link
Most likely, this issue will not be settled during the current session of the Supreme Court.

Maybe next year. Of course, Adam Schiff will drum up some lies before November, and say that he saw this "damning evidence against Trump" in the Grand Jury material, lol.

originally posted by: Fallingdown
a reply to: tanstaafl
If you could’ve articulated yourself correctly I would’ve agreed. But you didn’t you threw an accusation at me that wasn’t true .

You posted it. I acknowledged it appeared to be a quote, but pointed out your link was paywalled, so there was no way to confirm it.

And there is a way to be sure. I supplied the link in my second post quit lying .
A paywalled link is not a link, it is click-bait.

Do you understand the difference between the two ?

My God I’ve given this link to you three times now . I agree with you about most of what you say. With the exception of your claim that I wrote that post .

You are 100% wrong on that. But I think I can see why that is . You edited that passage and supplied your own then directly attributed to me. Here’s your first post with the heading WRONG. In which you were wrong in . 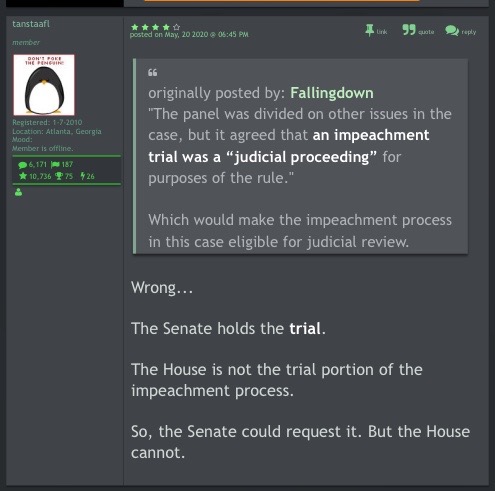 Here’s the way it appeared in my 0P .

You might also want to take a look at the word preliminary you seem to have skipped over that too .

I never meant to imply that it was caselaw now .

I ask you this question do you have an answer ?

I’m just curious. What would the exact wording have to do with the decision ? They granted the release on the grounds of the Federal Rules of Criminal Procedure rule 6 (e’s) exception for judicial proceedings .


“
You keep throwing the phrase paywalled around like it’s a got you statement. Are you telling me you’re in this conversation and you so well-versed on the wall you can’t even figure out how to look up a case ? Or better yet you don’t have the simple understanding about to take the case number and work your way down to the original keys by simple copy paste and search ?!

Here you go again put a little legwork into it I’m not your secretary .

Third or fourth time
edit on 22-5-2020 by Fallingdown because: (no reason given)


So since you want to argue constitutional law. I went back and checked out a thread of yours on how to change the impeachment process. When I get a little time here I’m gonna put a post together on that. You do need some help there because that idea was politically naïve .
edit on 22-5-2020 by Fallingdown because: (no reason given)

originally posted by: Fallingdown
a reply to: tanstaafl