Official UFO Disclosure “May Be Imminent” – A Historical Perspective

originally posted by: pigsy2400
Good work by the way...I do find it curious as to why you have left out the comments of TDL circa 2016 and leading into 2017?

I _did_ include some press coverage about forthcoming Disclosure which was provoked by DeLonge's statements and included a screenshot of one headline that quoted him.

That press coverage arguably involved headlines that went further than the statements being quoted. See, in particular, the entry in the list above entitled "2016 - Daily Express newspaper" at the bottom of Page 2 of this thread. The headline asked "Is World About to Be Told Aliens Exist?" based on DeLonge saying that "big things are coming":
www.abovetopsecret.com...
www.express.co.uk...

I couldn't (and can't) recall any definitive claim by DeLonge regarding forthcoming "Disclosure". Quite a bit of other hype, of course which was _interpreted_ (not surprisingly, given the language used by DeLonge) by many in the UFO community as him suggesting some imminent Revelation with a capital R.

By the way, some people in the UFO community think that the events in 2017 _were_ Disclosure (with a capital D).

One increasingly influential member of the UFO community posted on Facebook this week in response to my posting the list above. He stated that Disclosure has taken place and that "people" either "need help understanding what they read and see or they are spreading disinformation". He comment that he "would suggest the latter". That statement, as with most of his posts, got quite a few "likes".

If you have any relevant statements to add to the existing list (by DeLonge or anyone else), I'd be more than happy for you to post them in this thread. I'm sure there are loads more by various people and am a bit surprised this thread hasn't provoked many more examples that I missed.

(This thread was a relatively short term project for me. I could have checked a lot more books and other sources, particularly by some of the more sensationalist members of the UFO community and I'm sure I would have found more. I'll make note of further examples as I come across them when re-reading material in the future and either post an expanded list somewhere or add more material piecemeal here).

posted on May, 23 2020 @ 03:49 PM
link
a reply to: combatmaster
I think everyone should give Derrel Sims nicknamed the Alien Hunter from someone else by random chance....Seems to be on to some good common sense theories and wants science and evidence to back up His claims which He investigates..
www.alienhunter.org
edit on 23-5-2020 by Jobeycool because: (no reason given)

originally posted by: Jobeycool
a reply to: combatmaster
I think everyone should give Derrel Sims ....

Everyone should give Derrel Sims what? You didn't finish the sentence.

Alien abduction experiences: Some clues from neuropsychology and neuropsychiatry


Many thousands of people around the world firmly believe that they have been abducted by alien beings and taken on board spaceships where they have been subjected to painful medical examination... Given that such accounts are almost certainly untrue, four areas of neuroscience are considered with respect to possible clues that may lead towards a fuller understanding of the alien abduction experience.

Then I saw this and thought this might explain 79 of them, but it turned out to be a fake story, though it left me wondering if someone could really be doing this, but there's never any real evidence; the implant "evidence" I've seen is just completely stupid. What I found on Derrel Sims site talks about "implants" that never have any real technology....it doesn't make any sense to say they are alien. I've had a few foreign objects rejected by my body as I'm sure other people have, which is what all the "alien implants" seem to be, just ordinary foreign objects, not anything alien.

Did a Texas Man Confess to Kidnapping 79 People While Disguised as an Alien? 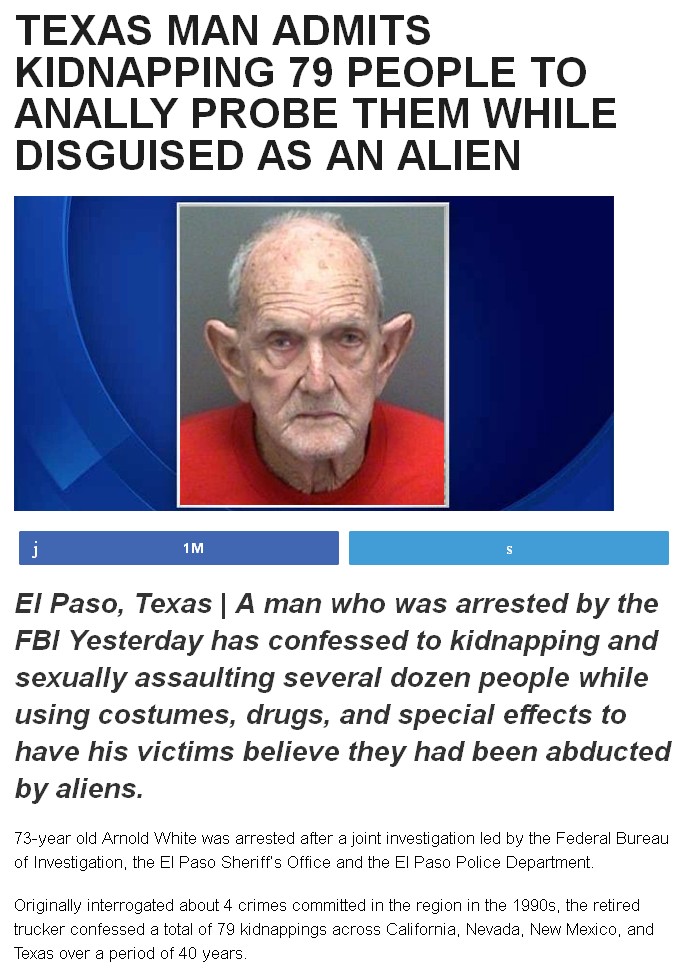 originally posted by: IsaacKoi
Here on ATS, there are still quite a few ETH proponents but I'd say that the number of people that think disinformation and/or secret projects are central to ufology have become a disproportionate percentage of the most active, long-term users (at least in the threads I follow the most and find the most interesting).

Speaking for myself since I don't know if this applies to other ATS members, since 2017, TTSA UFO stories have been prominent, and someone said that they got about 70% of UFO researchers to sign non-disclosure agreements.

Here's a story about that:

Tom DeLonge’s Origin Story For To The Stars Academy Describes A Government UFO Info Operation DeLonge is either lying and his company can't be trusted or dark areas of the military-industrial complex had a direct hand in its founding.

I think most UFO cases don't involve disinformation, and some of the most revealing cases show how important the psychological aspects are, like the Yukon case, with misperceptions so vast that some people still dismiss the documented explanation of manmade objects entering the atmosphere at about 233 km away, because they are so different than witness descriptions of a giant mothership at only 300 yards away.

posted on May, 23 2020 @ 05:16 PM
link
As mentioned in my last post. The clock for disclosure is ticking. Ever since the pilots began speaking about the recent incidents stemming back to 2015 in Florida and Virginia; our E.T. presence has made it clear that there is some sort of time limit. At least that's what I'm calling it. In 2018; we got the confirmation from our Government that there is a Unidentified Aerial Phenomenon. After all the reports over the years; they finally got around to admitting that there are Unidentified Aerial Phenomenons. What else made them come to terms with that? They have could have easily kept denying it; just like they've been doing for the past 50 years. There is obviously another hand at play.

But something to think about, falls on our E.T. friends. How would they go about revealing their presence here on this planet? No; I don't think it would be the way they depict it in the Hollywood films. They would want to do it, in such a way that causes less panic. So that rules out hovering a UFO mother-ship over the nation's capital.

As an Inner Earth believer; I'd put my money on our advanced friends doing this a lot more intelligent. And here is how. They are aware that our Governments have signed an Antarctic Treaty that prevents any sort of war like nature on the continent. Therefore our advanced E.T.'s could just have a mother-ship in a stationary position over a certain coordinates of Antarctica. They are fully aware that our Government's do their best to edit/blur things out that they don't want us to see. That only works if the object eventually moves. It would be rather difficult for them to continue to blur/delete an object that REFUSES TO MOVE. In order to hide the truth they would be forced to either shut down their satellites for a long period of time; which could attract the attention from the public. Eventually the information regarding the matter will drip it's way down to public level and before you know it; the entire world knows that there is a situation occurring in Antarctica that is out of our control. The public is only going to assume that a couple of things are occurring. Either the polar ice caps are melting at an alarming rate; or something involving YOU KNOW WHAT; is happening.

posted on May, 24 2020 @ 07:58 AM
link
Way late but it hit me that you were right until I considered we NEED confirmation if it exists. If not then we need closure.


originally posted by: Blue Shift
The US government has repeatedly - over the last 70 years or so - said that they don't know what UFOs/UAPs are (hence the "U"), but after some investigation they don't appear to be either a threat or aliens from space. That's what they have disclosed.

The Antarctica situation has been too fantastic to wrap your mind around. The concept that something is under the ice is believable but the lockdown is so severe flat earther's seem to think it is their clue that something is beyond the place we cannot go and it proves their story. Well, sounds like it is a mystery started by Admiral Byrd that needs a real conclusion. Our lack of knowledge and proofs of theory's are a burning itch for some people to solve. I could pour myself into research but where do I obtain what I might consider reliable data? I have a dilemma.

originally posted by: ConfusedBrit
tale of TV writer and composer Robert Emenegger being asked by the U.S. Department of Defense to create the 1974 award-winning UFO documentary, UFOs: Past, Present And Future, the carrot being that the DoD promised him genuine colour footage of a 1971 (or 1964, dependent on which source!) UFO landing, featuring alien contact with personnel at Holloman Air Force Base.

After spending a couple of days on the Emenegger/Holloman UFO landing footage saga, I've found a few avenues that are worth spending more time on - relating to Colonel William Coleman and also in relation to Paul Shartle.

These avenues may be dead ends, but I'll see what I can find...

posted on May, 25 2020 @ 08:49 PM
link
Huh. Would you accept that those videos likely display a type of drone or advanced radar disruption technology? Unless you have something to point to which can display proof of their extraterrestrial nature? It ain’t disclosure.