Actually, nobody ever said it was a fake virus.

Incorrect there are several posters on this site that have repeated over and over this is a fake virus, or more specifically a fake pandemic .

That's why you have to look at what other countries are doing, and their success rate.

President Trump learned early on in his Covid-19 task force meetings, that countries where people take Hydroxychloroquine to prevent malaria, had almost no Covid-19 cases.

The same was true with people who take HCQ for Lupus.

When I heard the usual Trump-hating media (including Fox News's Neil Cavuto) screaming how bad Hydroxychloroquine is, and that you will surely die if you take it, I knew that President Trump was on to something big. His many meetings, intelligence briefings, and top-quality White House physicians empower him with global knowledge of all types.

Surely the Whitehouse physicians don’t have as much knowledge on the subject as cNn and their mindless followers who are terrified of an EXTREMELY INNOCUOUS virus?

I’d put my money on cNn over a medical doctor any day of the week. Wouldn’t you?

This is NOT something to worry about. But if there is a drug that people can take to alleviate symptoms (which there absolutely is) why would people be opposed to that drug???

Also, the medical team was discussing using disinfectants in a medical way, just before the press briefing where President Trump mentioned disinfectants as a Covid-19 killer.

It was the usual losers in the media and social media who ignored that fact, when it was disclosed later in the day...that the task force was brainstorming a way to use disinfectants.

You keep saying it's a fake virus and a fake pandemic and now you're saying this drug kills this fake virus, how do you reconcile having completely opposite viewpoints on the same subject.

You have made that false claim at least 8 times. For the 8th time...I said the reaction by Anti-Trump Governors, the NBC/NCAA, and the ever-hateful media, was a ginned up scandal, using Covid-19 as their excuse.

Did you immediately feel the need to rush out of the room to melt some Lysol down in a spoon and mainline it ?

Neither did anybody else . Lol


Because Hydroxychloroquine can prevent you from contracting Covid-19


How do you know this?

Because, as stated in the OP links, India, China, and Costa Rica says it can.

No. I know better.
Him, probably not.

I knew you had it in you . I waited for two years to hear you make a joke . Bravo !

Here’s one on sniffy touchy-feely Joe. 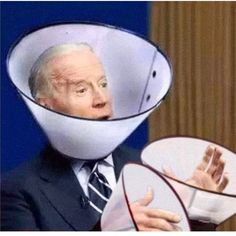 posted on May, 20 2020 @ 02:48 AM
link
a reply to: Breakthestreak
Exactly right. I've made several threads pointing out how Trump-haters, and VIP's who fear being exposed, have concocted coup after coup. This last one is a doozy though.

A study was published last week showing how people in "locked down" states have higher incidences of suicides, spousal abuse, and increasing drug/alcohol problems. Estimated that 70,000 deaths will result.

Even if it's only 10,000, that's blood on the hands of the governors who went overboard in their zeal to keep the country economically depressed.

It's interesting (but not surprising) how when a Liberal Leader says Hydroxychloroquine works, it is totally ignored by ABC, CBS, NBC, CNN, NYTimes, WaPo....

That's why it's important to have alternatives to those outlets. If it were not for alternatives, we wouldn't know that Governor Andrew Cuomo gave a good word for Hydroxychloroquine, based on feedback from NewYork physicians.

The disgusting supporters of the media and the left do not care one iota about suicides and drug dependence.
They most definitely don’t care about spousal abuse.

There has been MANY virus outbreaks in the last few decades. From the HK flu, to aids, Ebola, sars, mers, bird flu, swine flu what have you

The media didn’t tell the cucks to be scared, so they weren’t.

Now, a VERY HARMLESS virus outbreak from China and this is the response?!?!?!??

The virus is real, but harmless. Something is afoot here. I don’t believe it’s Trump related, it’s bigger than that. The Hidden Hand is playing some cards.

Or even better...Real World Reality. REALITY AND EXPERIENCE trumps both science, and middle age alchemy.

originally posted by: Breakthestreak
The msm trumps science any day of the week

CNN is a good barometer for a lot of things. For the most part, if CNN is AGAINST it, Americans should be FOR it. And the reverse is true as well, for the most part.

And after the media says in their most dire voice, "Corona Virus will come in a second wave this fall... and will be with us forever!", they neglect to mention that all seasonal viruses come in waves...and are with us forever.

People who buy in to the hysteria pushed by these idiots, are in a bad place mentally.

originally posted by: Phage
a reply to: Fallingdown


Did you watch the press conference ?


obviously you DIDNT or listened though an anti trump filter.

he never said inject bleach, lysol, or any other cleaning chemical disinfectent.

here is what he said WORD FOR WORD

ATHE PRESIDENT: Thank you very much. So I asked Bill a question that probably some of you are thinking of, if you’re totally into that world, which I find to be very interesting. So, supposing we hit the body with a tremendous — whether it’s ultraviolet or just very powerful light — and I think you said that that hasn’t been checked, but you’re going to test it. And then I said, supposing you brought the light inside the body, which you can do either through the skin or in some other way, and I think you said you’re going to test that too. It sounds interesting.

ACTING UNDER SECRETARY BRYAN: We’ll get to the right folks who could.

THE PRESIDENT: Right. And then I see the disinfectant, where it knocks it out in a minute. One minute. And is there a way we can do something like that, by injection inside or almost a cleaning. Because you see it gets in the lungs and it does a tremendous number on the lungs. So it would be interesting to check that. So, that, you’re going to have to use medical doctors with. But it sounds — it sounds interesting to me.

So those of us who dont try to twist everything to anti trump and/or use COMMON SENSE can see he was asking (in a way we might ask as common people) if there is a disinfectant BY CONCEPT medical chemical that could wipe out the virus.

if someone is STUPID ENOUGH to interpret that as "cleaning disinfectant" they are partisan or a moron..

since most american are not we KNEW what he meant and didnt need it said like we are four year olds.

so to keep harping on this you look foolish.. even more since ANYONE can find what he ACTUALLY SAID within .025 seconds with a google search (i did)

so unless you want to keep looking like a partisan anti trump fool you may want to stop repeating this clearly disproved rant.