People are refusing to work

posted on May, 19 2020 @ 11:25 AM
link
Everyone in a position to do so needs to remind subordinates they can be fired for no-showing. That might get some to come back and quit acting like weenies, but it will definitely let folks know who's worth keeping and who isn't.

Cut 'em loose. If they can't be bothered to show up now, they're not going to get any better down the road. There's plenty of willing, desperate folks out there who're more than happy right now to hold those weenies' positions.

??? You are on a thread where everyone is griping that people arent wanting to go back to work...
And, your answer is for those people to stay home???
Something just doesnt compute here...
Can anyone get back to their lives without forcing those who for whatever reason, weather it be they are in a high risk group, cant go back till the little ones get back to school, or just cant come up with the normal ppe they have always used in their jobs? Or is your answer threatening them with financial ruin, poverty, hunger, and homelessness?
Considering how many store clerks have been assaulted because they had the nerve to try to enforce a mask policy... I can see why some dont want to!!!

OP gave us an anecdote about four people.

That’s all it took for the gang to generalize it to the entire US and start bleating the narrative.

Stay home, don't collect a dime from anyone though.

Because staying home is YOUR decision.

HAs our nation turned into a giant pansy-farm?

If people aren't allowed to go back because the rest of you would rather stay in, you're also threatening them with financial ruin, poverty, hunger, and homelessness.

And guess what ... if no one goes out and produces because we're all being forced to stay in and accommodate you, NOTHING gets made and eventually you have nothing too because there is no TP, no food, no power, no water, etc. All those people who can't because you would prefer they not because it's just easier to make you feel secure. Well, you can just kiss it all goodbye because everything collapses, and then you get to find out how good you are at hunting down and eating your neighbors. 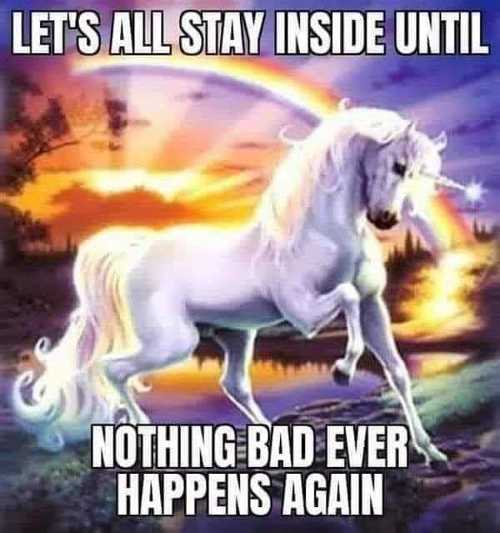 But here's your unicorn!

originally posted by: dawnstar
a reply to: ketsuko

posted on May, 19 2020 @ 11:43 AM
link
Yeah, one of the questions asked for UnEmployment is if you quit or were terminated/laid off. It makes a difference on the reason why you aren't working if you are eligible to receive UE benefits. I believe the other telling question is if you refused an opportunity to work. Even though most states are waiving the waiting period and the mandate to seek employment - for the time being, those two questions can negate any Un-Employment income in most every state.

I have mixed feelings on this extra UE income. I believe pretty much everyone should work. It's good for morale, mentality, character and physical activity which otherwise might be completely void with the exceptions of kitchen and bathroom trips. But if you can't work because of lockdowns etc. due to Covid19, it's good to have something to fall back on.

It sucks working a chitty job , especially if it's because of lack of opportunity, personal qualifications or poor location. It also sucks if you're working when others are using every avenue available to stay home and collect the extra UE income, ALL THE WHILE knowing that although you aren't collecting any of this money, you will be equally on the hook to repay it with taxes from your hard-earned income just as much as those who enjoyed the benefit of receiving it.

Mark Cuban was speaking the other day about having a temporary $1,000/weekly stimulus for people to use to stimulate the economy. Instead of giving it to the companies, give it to people to spend. Unfortunately, I think a lot of this money will go to financial institutes because of loans and debt. He's thinking for 3 months of so.

Lots of ideas. But we can't keep going the way we are now.

There is a long-standing debate about how the government could/should stimulate the economy.

Time after time, getting more cash into the hands of ordinary Americans is the basis of economic success.

The other option is to give corporations and employers more money with the idea that it will “trickle down.”

Spoiler alert, it doesn’t. The economic machine of the classic American Middle Class meant that ordinary people (the bulk of the population) had more money to spend, thus growing the economy to historic levels.

But as you can see, here, an anecdote about four people has spurred a cavalcade of media-driven narrative.

Of all the things that make me seriously doubt the intellectual capacity of other people in public, this is a big one: How many of these people support politics that result in "trickle down?"

Because if you still believe in that nonsense at this point you are the ideal target audience for every Nigerian prince in the history of Nigerian princes.

Stay at home then.

I want to go out.

One way or another, people have to have money.

The argument here is over the best way for them to get that money.

In the classic economic model, people earn it through their own labor producing goods and services in the economy. The money they receive is, one way or another, representive of the value of their labor.

In this new model, the government is simply sending people money. There is no value at all, and those who would prefer to earn their money are actively being prevented from it. In many cases, this is causing them financial ruin and will cause the active removal of their goods an services from the economic model when and if it ever re-opens with no possible compensation for those persons injured.

At some point, the government, that only derives any money at all by confiscating it from the productive segments of the classic economic model, is going to run out of money to keep paying people to not be productive. If this failing model goes on long enough, then everything crashes catastrophically.

posted on May, 19 2020 @ 12:17 PM
link
I think I am right, based on my life experience; and anyone who disagrees with me, based on their differing life experience, is either lazy or heartless. Because everyone should be like me. Since I'm right.

We are all the products of our environment; all making decisions based on the sum-total of life experiences.

And judging other people for arriving at different conclusions.

My new motto is becoming that great phrase of Thucydides' History of the Peloponnesian War:

"The strong did what they pleased; the weak suffered what they must."
edit on 19-5-2020 by Graysen because: the classics rock

The opposite happened at my employment. They fired everyone to save money and want me to return and pick up the slack and work harder for no reward.

My company used this to clear house and save money. Multiple people are now unemployed and yes id rather stay on unemployment instead of dealing with those greedy fooks

The topic in the OP was a lament over an anecdote about four people.

Folks who think of themselves as right-wingers always come down on the side of the moneyed interests over the workers.

The “classic” model of labor was slavery, either actual or wage slavery.

The “new” model you’re referring to is the pittance tossed to ordinary people to justify the $500 billion given to business.

Money in our economy arises from the central banking system. It has nothing to do with “production.”

The government serves the national banking interests. Everything else is incidental.

When all the shut downs started my husband was given the option of taking a furlough, which I advised against because I believed there was a good chance that those who chose furlough might not have a position to come back to- which has proven to be a reality for a lot of people. When the unemployment runs out (along with the extra $600 per week in federal contributions) a lot of these folks will be fighting for even minimum wage jobs because their former positions will not exist any more. Many businesses who have not gone bankrupt have scaled back to bare minimums in staffing and eliminated positions permanently.