originally posted by: carewemust
Fox News's Neil Cavuto must own a lot of stock in big Pharma.

Well, he's not alone ... but the only evidence of that is actual scientific studies, so not on the Trump menu.

originally posted by: IAMTAT
Out of the blue...in a Press conference, today...and while answering a question...President Trump admitted he has been taking Hydroxychloroquine as a preventative for a week or so.

He said he asked the WH doctor about it...and was told he could try it if he wanted to.

WH doctor,
has not responded to the press on this prescription drug, FDA says no thus far, citing possible problems with anyone with heart problems/a heart problem....so?


originally posted by: carewemust
Fox News's Neil Cavuto must own a lot of stock in big Pharma.

Or do they know deep down there is no danger with HCQ which of course there clearly isn't. If there is any danger it is with z-pac - and I don't think Trump is even taking that. It is amazing they are able to look past 60 years of millions of people taking HCQ with almost zero issue, but as soon as Trump mentions it is a good risk to try and treat Corona because of some positive news about it - he has to be proven wrong at all costs.

It really seems Trump failing is more important than saving other citizens lives to these ghouls.

originally posted by: Grimpachi
He says he is taking it as a preventative measure so those that believe in what he says will likely emulate him.

Me, I will wait till the actual studies are done to decide.

He's not alone you know - thousands and thousands of doctors took it preventatively when they started treating covid patients.

But they are all irresponsible crazy people too I guess. After all their would be no faster way to overrun the hospitals than having all the doctors die of heart attacks.

Wake up - there is no real danger. It's all about big pharma trying to keep a generic from eating into their profits.

You know what he misses most though, right?

The rains down in Africa.

They're a blessing for what's deep inside whenever I'm frightened by the thing that I've become.

posted on May, 18 2020 @ 07:00 PM
link
I don't think people have the capacity to see that they are living during a very special time in this Epoch.....we are now in the final stags of passing the Rubicon, this is a critical Juncture Billions upon Billions upon Billions participated in but did not get the opportunity to see come to fruition.....right now today we are all of that well place living Faith and Hope in Full-Bloom.

The Worm HAS TURNED.

Cancer AND DISEASE are over...starvation is over...weaponised "resource terrorism" is over…..Religious graft is over...scarcity is OVER GLOBALLY as we speak...Global pollution is over...….THE MANNA IS IN THE SKY FALLING AS WE SPEAK WE JUST DO NOT KNOW IT IS ON ITS WAY DOWN AND THAT NOTHING CAN STOP IT. FROM GETTING TO ALL OF US .

Best of all the fuc#$ng MSM is my god finally O-V-E-R.

I have been taking a generic form of Sweet Annie and Green Black Walnut tinctures...same thing different form...an effective Anti-Parasitic/Anti-Bacterial agent that can effectively and PRO-ACTIVELY treat the belly and blood ...A NICE COMBO THT EASILY WIPES OUT THE pLEOMORPHIC bACTERIA HAUNTING US..TOGETHER....JUST LIKE COVID ATTACKS THEM...TOGETHER.....simultaneously.....to me and mine...and clearly to Trump and Friends...Covid is only a cold to us..... and we knOw we can get it more than once but we also know with no bad belly/blood Parasites/Bacteria it cannot ever get any bigger than a cold......its time to move forward....the technical diagnostic findings and new honest research will follow us....cancer WILL NOW SOON BE over.....covid is over....time to move forward now.
The Bug is out of the Bag now FOREVER.
edit on 18-5-2020 by one4all because: (no reason given)


You will soon be finding these or similar PILLS at every Pharmacy in the World....easily and cheaply purchased without a Prescription.....they are simple Anti-Parasitic/Bacterial remedies that allow the body to heal itself.They work in HOURS not weeks.

There are also thousands of food/plant based remedies that alone or in combo will have similar expedient positive impacts....hey get this----you heard it here first ok----the Russians did not lie they do not treat their people like Sheep or Mushrooms like other Major Countries have done to their People so by taking a virtual visit to a Russian Moose Farm we know that MOOSE MILK is even one of these wonderful foods we can eat in tandem with others to help us stay healthy …. Moose Milk is used to treat different ailments including Peptic Ulcers....

Yes,you will actually see them...and if any kind of god is with you and yours you will never see another vaccine in your lifetimes.

The real beauty here is that you can use certain Animals as remedy Factories....like Moose and Goats and Bacterian camels....if they are allowed to eat their natural diets....or if we enhance their diets with Anti-Parasitic Foods....they will produce remedial milk for us and for our kids.....and just so we all understand this now.....we ERADICATE Parasites/Bacteria by including these remedial foods in our diets….no one will ever worry about this again.

Once grocery stores stop selling mineral deficient non-remedially foods that actually make us sick to us and begin selling anti-parasitic/Bacterial foods cheaply and advertise them fairly and once the major Pork and Fowl food industries come into compliance treating foods to kill contaminants properly....and once simple non-prescription Anti-Parasitics are available Globally... and once we stop using the Chlorine Chloride water treatment chemicals that have been weaponised against us all Globally....well after this we will not see cancer or covid or many many diseases we think of as normal now.

Yeah right,
quite a horrible thing for you to say really. Whatever, as for the Z-pak, Trump has given it a nod and a wink as a helper for the lungs, he did caveat though that it's not so good for people with heart condition/s, (such as he is likely to have) But still, he is broadcasting on Hydroxychloroquine which it seems, has also heart problem connotations.
So, what about America's first COVID-19 patient, and how, (and when) did she die,
Patricia Dowd, 57, died on 6 February, from a ruptured heart.

The speculation from then was that it was, (hyper antibodies) that caused the rupture, they are still saying that antibodies can be a killer...so? Where does that leave Trump with his, "What do you have to lose" attitude, it's so fecking stupid...it's like this is an old guy who wants to take a few with him when he goes....yuk!

If you want to take it go right ahead I won't tell you not to. Out of those thousands and thousands of doctors that you claim took it preventatively only a small fraction of them have gone on record saying they have. Your claim and Trump's claim absent of strong evidence I will trust almost as much as a pissed off badger letting me rub its tummy without trying to maul me.
edit on 18-5-2020 by Grimpachi because: (no reason given)

Thankfully, no one person out here in keyboard land is important enough to warrant being provided "proof" of anything, lol.

He does understand the difference between a preventative and a treatment? 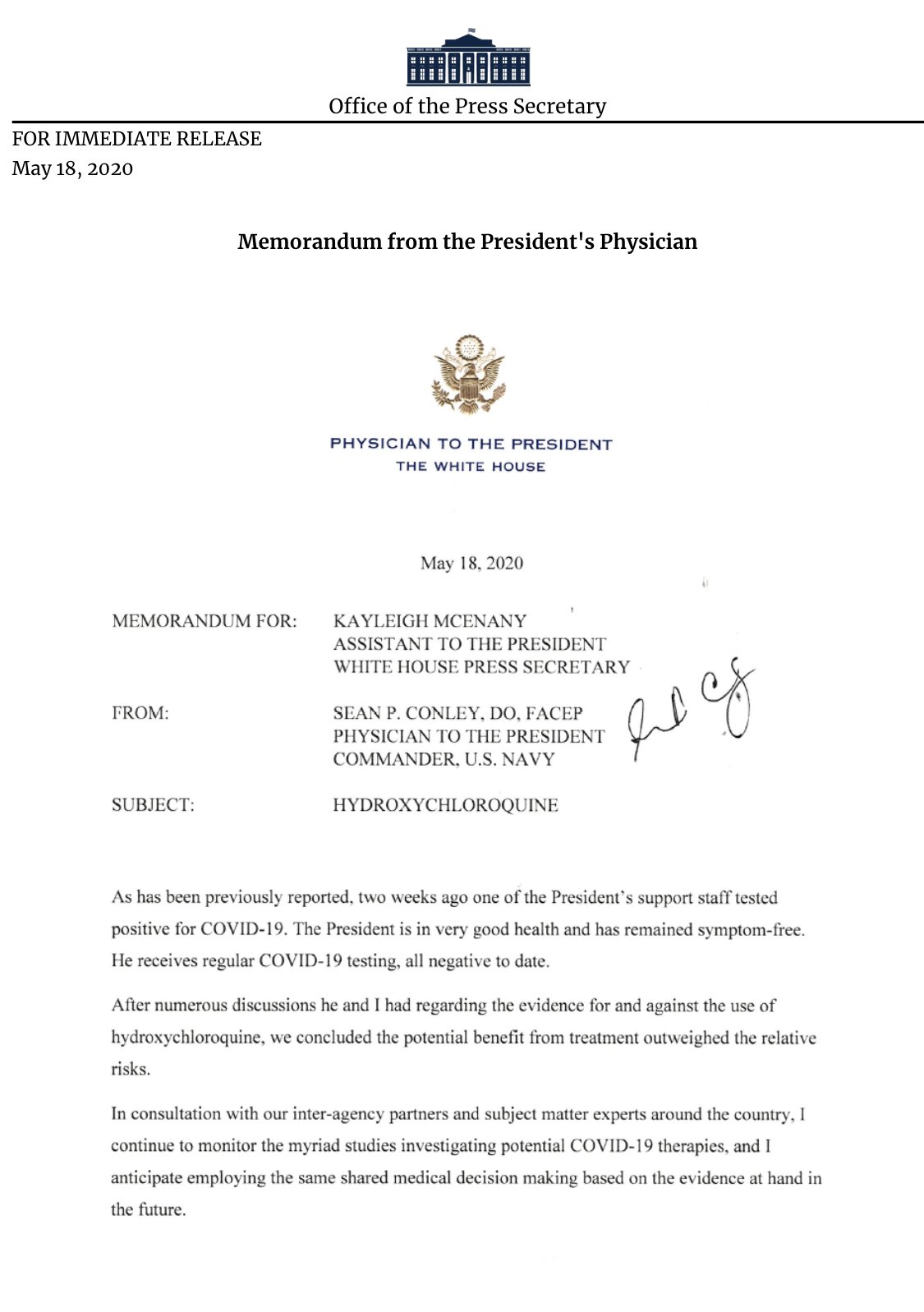 It seems the cases of people coming down with it in the White House freaked him out.

Bingo! At the suggestion of a person who studied/used natural health aides, I've been ingesting natural disease-fighters for over 20 years. No colds, flu, etc.. in all that time.

If you want to take go right ahead I won't tell you not to. Out of those thousands and thousands of doctors that you claim took it preventatively only a small fraction of them have gone on record saying they have. Your claim and Trump's claim absent of strong evidence I will trust almost as much as a pissed off badger letting me rub its tummy without trying to maul me.

I mean, you get it...this is Trump at his finest, snakey oil..."I take it myself", bomb site car dealer, "What have you got to lose" by giving it a try, "Nobody had died before I ordered a lockdown"....."Er, I think", (no he didn't say that last sentence, he did say the one before though, more or less.


The letter doesn't confirm that Trump is actually on the drug.
edit on 18-5-2020 by Sookiechacha because: (no reason given)