Fact: Reagan and the NRA supported gun control when blacks decided to open-carry

30 members of the Black Panthers protested on the steps of the California statehouse armed with .357 Magnums, 12-gauge shotguns and .45-caliber pistols and announced, “The time has come for black people to arm themselves.”

The display so frightened politicians—including California governor Ronald Reagan—that it helped to pass the Mulford Act, a state bill prohibiting the open carry of loaded firearms, along with an addendum prohibiting loaded firearms in the state Capitol. The 1967 bill took California down the path to having some of the strictest gun laws in America and helped jumpstart a surge of national gun control restrictions.

The sight of blacks carrying arms was such a fright that even the NRA came on board:

In contrast to the NRA’s rigid opposition to gun control in today’s America, the organization fought alongside the government for stricter gun regulations in the 1960s. This was part of an effort to keep guns out of the hands of African-Americans as racial tensions in the nation grew.

They do look scary right? 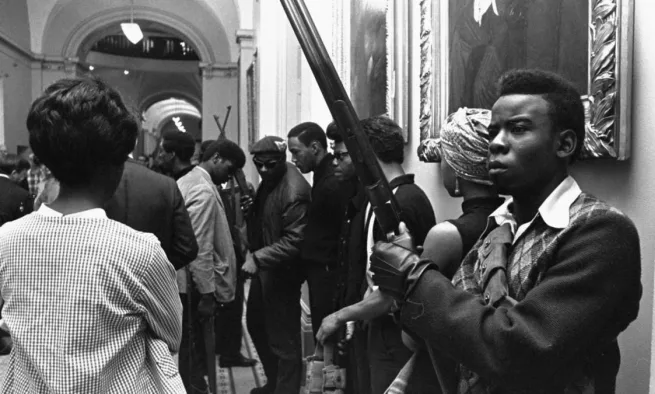 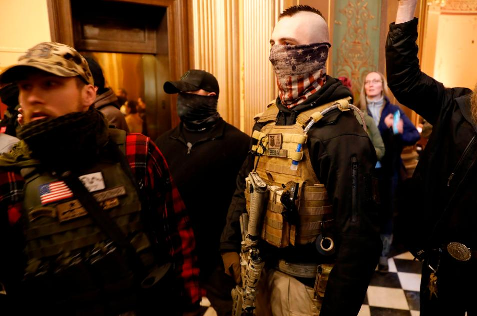 What you think ATS? Is this inaccurate? Were there different circumstances? I just find opposing attitudes when the shoe is on the other foot you know? With recent events, it's very telling. People say race doesn't matter to them, but actions speak louder than words.

Rights only apply to certain people right DB? Of course you don't care.


originally posted by: DBCowboy
a reply to: Southern Guardian


Rights only apply to certain people right DB? Of course you don't care.

Of course not, unless you're a democrat.

Or did the NRA support gun control in general up to 1970?

1934–1970s Edit
The NRA formed its Legislative Affairs Division to update members with facts and analysis of upcoming bills,[34] after the National Firearms Act (NFA) of 1934 became the first federal gun-control law passed in the US.[35] Karl Frederick, NRA president in 1934, during congressional NFA hearings testified "I have never believed in the general practice of carrying weapons. I seldom carry one. ... I do not believe in the general promiscuous toting of guns. I think it should be sharply restricted and only under licenses."[36] Four years later, the NRA backed the Federal Firearms Act of 1938.[37]

The NRA supported the NFA along with the Gun Control Act of 1968 (GCA), which together created a system to federally license gun dealers and established restrictions on particular categories and classes of firearms.[38] The organization opposed a national firearms registry, an initiative favored by then-President Lyndon Johnson.[37]

Kind of changes the dynamics of the opening post.....

Race certainly matters to someone here.

Where did the other thread go?

“People say race doesn't matter to them, but actions speak louder than words.”

My wife and I aren’t the same race but we don’t think about it that much.

We go to the range together and we try not to shoot each other.


My wife and I aren’t the same race but we don’t think about it that much.

Which one of you is of the "human race"?

Well that explains why South Central LA has been so peaceful the last half century!

That would definitely be her. She’s always telling me to stop being an animal.

That’s why we only go to the range together.

She is too good a shot to take hunting.

Eta: point taken though. We are all the same other than our cultures. Gotta hate Dem labels 👍
edit on 5 11 2020 by NorthOfStuff because: (no reason given)

2 in time of peace

2 in the afternoon make me feel alright

originally posted by: Lysergic
Hmm thought I had posted, dunno what happened:

2 in time of peace

2 in the afternoon make me feel alright


Something strange happened. I posted and then ended up with some kind of error screen. OP pulled a ninja edit in the meantime.

originally posted by: DAVID64
So you had to dig up an article from 2018, about something that happened 50 years ago to whine about ?

IKR. Has covid taught us nothing?

originally posted by: Ksihkehe
Something strange happened. I posted and then ended up with some kind of error screen. OP pulled a ninja edit in the meantime.

Spelling error. I used site instead of sight.

posted on May, 11 2020 @ 07:35 PM
link
With no input one way or the other...being a foreigner, it looks like nobody can make their minds up,
Carry, no carry...constitution, carry, no carry, constitution, Ffs, somebody kick something into touch.

The OP, does have a point though, and if Ronald Trump, and Donald Reagan say no carry, you guys should listen.

Fact: Anyone that disagrees with the OP is more than likely racist.

There is probably some nuance to this, but given your posting history, higher order of thought really isn't your strong suit. However, I am still going to try to explain it.

First, you are probably right. There was some racism involved. Given the time period, most white folks were racist. I mean there is no big revelation in this point.

Second, can you tell us when armed citizens started marching on the capital prior to the Black Panthers? My guess is never. As such, the legislation isn't so much against gun rights, but in response to protesters arming themselves in such an alarming fashion at the state capital. As someone who supports gun rights, I don't like open carry at political protests as I feel it doesn't help the cause and just serves to escalate a situation more than anything.

Instead of pouring salt in the wound of historical injustices, why not research if there is a way to repeal the Mulford Act as it was clearly enacted, without a doubt, to target a specific racial group, i.e. descrimination, which inadvertently targeted everyone.

If we believe in the term "institutionalized racism", that racism is everywhere all the time, what can you do with that? Who do you go after? Where do you even start?

You have lost the battle before you even begin because your "enemy" is everywhere, everything, and everyone.

You gotta go after what you can confirm, not what you might believe to be occurring. Not to mention, such a belief isn't vindicating, it's neutering because a person can always have that reason, racism, as a way to explain why anything adverse or unfair happens in one's life.

With just the conditioned expectation that racism is that widespread, it does little to encourage beneficial engagement in society. Like the, "what's the use" attitude, which I wouldn't blame the effected group if that ideology was found to be accepted as truth, but that's incredibly ridiculous, IMO.

So it would be interesting to see if this law was enacted under the specific task of disarming African Americans.

I'm going to look into it because that's a specific target, clearly identified, that people can get behind instead of just spinning their wheels.

Thank you for sparking my interest.