The US defeated Japan in WWII but here in WW5, or whatever this is, Japan is wining hands down and it looks like simply because they wear masks and other Asian countries as well.

It sounds too good to be true. But a compelling new study and computer model provide fresh evidence for a simple solution to help us emerge from this nightmarish lockdown. The formula? Always social distance in public and, most importantly, wear a mask.
If you’re wondering whether to wear or not to wear, consider this.The day before yesterday, 21 people died of COVID-19 in Japan. In the United States, 2,129 died. Comparing overall death rates for the two countries offers an even starker point of comparison with total U.S. deaths now at a staggering 76,032 and Japan’s fatalities at 577. Japan’s population is about 38% of the U.S., but even adjusting for population, the Japanese death rate is a mere 2% of America’s.
This comes despite Japan having no lockdown, still-active subways, and many businesses that have remained open—reportedly including karaoke bars, although Japanese citizens and industries are practicing social distancing where they can. Nor have the Japanese broadly embraced contact tracing, a practice by which health authorities identify someone who has been infected and then attempt to identify everyone that person might have interacted with—and potentially infected. So how does Japan do it?

I know wearing a mask is a pain in the a__. But in February some lady sneezed on me and I was debating about wearing a mask and that did it for me. It's not a panacea or guarantee but it does seem to work, the evidence points out, in the whole picture.

“One reason is that nearly everyone there is wearing a mask,” said De Kai, an American computer scientist with joint appointments at UC Berkeley’s International Computer Science Institute and at the Hong Kong University of Science and Technology. He is also the chief architect of an in-depth study, set to be released in the coming days, that suggests that every one of us should be wearing a mask—whether surgical or homemade, scarf or bandana—like they do in Japan and other countries, mostly in East Asia. This formula applies to President Donald Trump and Vice President Mike Pence (occasional mask refuseniks) as well as every other official who routinely interacts with people in public settings. Among the findings of their research paper, which the team plans to submit to a major journal: If 80% of a closed population were to don a mask, COVID-19 infection rates would statistically drop to approximately one twelfth the number of infections—compared to a live-virus population in which no one wore mas

Here is a research effort that says it will help tremendously.

Yeah, that is kind of an obvious thing to anyone with half a brain. How anyone is claiming otherwise is either a fool or some jackass who thinks wearing a mask is a dire threat to their freedom to infect others.

No, the mask won't prevent all virus from escaping but it does catch a majority of the droplets, reducing infectious particles spread all over the place. If we would have started an campaign to wear masks back in March, we could have avoided much of this shutdown. 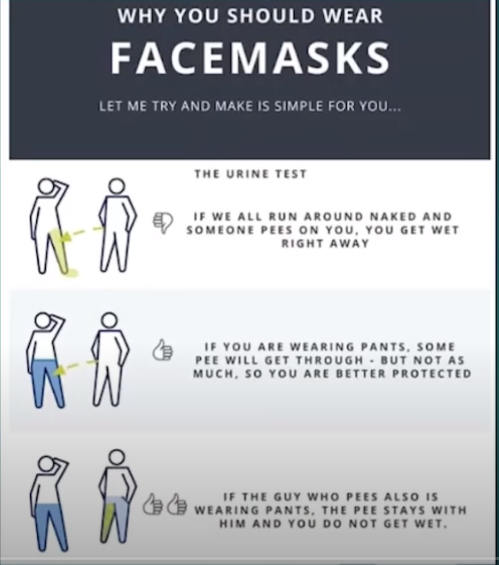 posted on May, 9 2020 @ 02:45 PM
link
I have had enough of this telling others to wear masks nonsense. I went ahead and went to a doctor and got myself tested to see if I needed to wear one. The result was Ligma.

posted on May, 9 2020 @ 02:54 PM
link
I still can’t find a mask. If I had one I probably wouldn’t wear it. Patiently waiting for the bars and gentlemen’s clubs to reopen. Can you imagine a stripper in a mask?

Halfswede
+11 more
posted on May, 9 2020 @ 02:54 PM
link
People need to not forget the end-game here. The goal was to 'flatten the curve'. That doesn't mean people won't get it. It means the timeline of people getting it is spread out.

It would be one thing if vaccines were weeks away however it is several months at the earliest and that's not even knowing how overall effective it will be. The reality is, they tried for other coronaviruses (SARS) and failed after more than a decade.

The fact is, once you reach the point of hospitals demonstrating that they can deal with treating people without getting overrun, it is time to begin removing the steps designed to flatten the curve so people can get back to normal.

I was very much in favor of the initial plan, however, people forgot the goalposts and imagined that it was somehow supposed to keep people from ever getting it.

The goal of not overrunning the hospitals has been reached. Time to return to humanity. The people who are going to get it will get treated at the hospital and we can move forward.

But logically it makes sense and is a burden but it’s better than this shutdown.

Whether people should be required to wear a mask is another question for another OP.

Seriously I am about done listening to the "experts" they cant make up their minds, same with the models numbers all over the place and they keep trying to influence policy with an every changing set of rules.

But it won't be if I don't exercise it!

See how far you get before your called a number of fine descriptors...

They’ve been practicing some really good ones...yessir...polishing their favorite turds...

Meted out by them...as they refuse to distance...or protect others from themselves ...and protect themselves by wearing a mask...and get all up in your face...spraying invectives...

A professor of medicine has explained that apart from masks not helping prevent catching coronavirus, they could also “autocontaminate”.


... According to infection prevention specialist Eli Perencevich, MD, a professor of medicine and epidemiology at the University of Iowa’s College of Medicine, if you wear a mask incorrectly it can actually “increase” your chances of getting the virus.

posted on May, 9 2020 @ 03:12 PM
link
The Japanese people eat lots of salt. Salt protects people from the cytokine storm of covid19. But only if you are deficient. That is important to state.

Ok, dingus, go to the doctor every day... or wear a mask. Geesh. Trust me, no one is asking to see your face anyway

originally posted by: Irishhaf
Gee... and what happened about 2 months ago... these same experts said dont buy masks, dont wear masks they dont do anything.

Seriously I am about done listening to the "experts" they cant make up their minds, same with the models numbers all over the place and they keep trying to influence policy with an every changing set of rules.

I listened carefully to the "experts" two months ago. I'm not so sure they were really saying we didn't need, masks as much as they were saying, save the masks for health care workers.

Basically it was the lesser of two evils because we did not have a supply.

The homemade mask most people will be wearing will do very little to mitigate transmission and likely lead to an unptick in staph and other bacterial infections.

I agree. I've made several different homemade masks and there is an enormous difference in fit. The flat pleated kind most people are wearing are absolutely awful. The very fitted kind that make you look like a ninja turtle work very well.
I think straps vs elastic are better too because they keep the sides very tight and secure. It also must have a nose clamp.

The other thing I often see if people pulling the mask down, or taking them off all willy nilly. There needs to be a massive education program about masks, how to use them, how to make them, how to wash them. Until that is done, their effectiveness won't be that great.

posted on May, 9 2020 @ 03:30 PM
link
In my case I've used sterile protocols a number of times throughout my life, most recently taking care of my Dad every day. I just very much prescribe to the Herd immunity theory, and even though I'm likely in the risk category I see no point wearing one except my concerns for my Mom who now lives with us. We wash our hands, sterilize and even use a medical-grade UV light to zap stuff coming in the house. Even then I think I had something 5-6 weeks ago, and if it wasn't CoVid how to hell did I catch whatever it was wearing a mask washing my hands and being extra careful?

This guy isn't alone quite a few qualified people know just this, got to plow through it a develop herd immunity it's the quickest and most effective way, we can't isolate forever there will be no vaccine any time soon that's 100 percent effective


It's become just another thing to virtue signal about.

COVID-19 is about 0.12 microns in diameter for reference.


Your masks are useless.