UFO Studies for the Development of US Aircraft and Weapons

posted on May, 6 2020 @ 06:36 PM
link
UFO reports describe performance advanced beyond anything on earth; if hostile, a threat. Since 1947, US military programs have attempted technology to duplicate UAPs for aircraft and weapons.

There have been too many such attempts to cover in one article, but like a saucer skipping across water, this piece bounces through time to look at some of the documented examples. 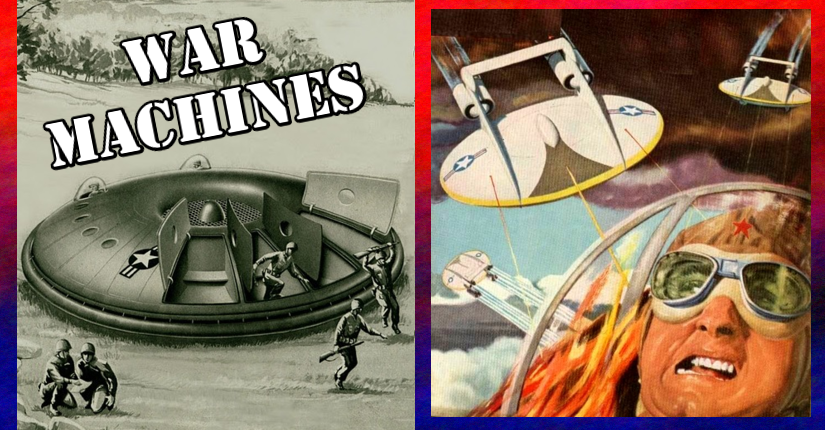 Just so I don’t misconstrue your well-researched piece, is the piece asserting the prospect of functional saucer-shaped airframes were born of witnessed and/or crashed disc(s)?

And several of the laments by the military string-pullers in the piece referenced fuel for propulsion. Or a lack thereof.


“It is possible within the present U.S. knowledge—provided extensive detailed development is undertaken—to construct a piloted aircraft which has the general description of [a metallic flying disc] which would be capable of an approximate range of 7000 miles at subsonic speeds.”

This doesn’t say to me alien, it sounds to me like outside-of-the-box spit-balling based well-considered eye witness accounts. But maybe not.


Give me enough money and I’ll build you one. It might have to be a model because the fuel would be a problem. ...they may be powered by atomic energy… or by some other fuel or natural force that our research hasn’t yet discovered. But the circular airfoil is quite feasible. It wouldn’t have the stability of the conventional airplane, but it would have enormous maneuverability — it could rise vertically, hover, descend vertically, and fly at extremely high speed, with the proper power. Don’t take my word for it. Check with other engineers."

This is Keyhoe quote. The last sentence is the key. Never been a physics problem, always been an engineering problem. Still is. Check with the engineers.

Thanks for the read. Keep it up 👍

originally posted by: CardDown
UFO reports describe performance advanced beyond anything on earth; if hostile, a threat. Since 1947, US military programs have attempted technology to duplicate UAPs for aircraft and weapons.

There have been too many such attempts to cover in one article, but like a saucer skipping across water, this piece bounces through time to look at some of the documented examples.

Attempts to duplicate or to obfuscate? These days people see UFOs and they will often write them off as some top secret project. Maybe they learn a little about the flight characteristics of saucers if they try to build one, but it seems like the real value is in getting people to be less nosy.

posted on May, 6 2020 @ 07:21 PM
link
a reply to: Cravens
For my premise, no crash is necessary, just the idea of flying saucer, and not necessarily one of alien origin. I suggest that similar technological inspiration was provided by science fiction.

The saucers (or reports of saucers) provided reminder of the vulnerability of the US to airstrikes from the Soviets. Not every aviation advance can be traced to saucers, but throughout the Cold War, the issue was never far form the headlines.

At least in the case of Lockheed's Kelly Johnson, he probably spent some time wondering about saucers, and just how close he could get with the resources at hand.

There's some of both, for sure. But the military didn't need to obfuscate by building saucers. They were already blaming their conventional balloons and aircraft for many of the sightings - rightfully or otherwise.

Military motivation is hard to pin sown and it shifts like sand depending on the changes of brass and the presidential administration. The US may not have always wanted saucers, but it gave them a high target to shoot for.

But are any operational airframes close to a saucer? In any manner. A flying delta doesn’t seem remotely close to a saucer shape, and Johnson’s Oxcart and SR-71 couldn’t be further from the shape of a saucer.

What significant advances in aerospace, airframe design, or any other ancillary pieces of aviation (air-breathing machines), can be traced in any manner to flying saucers? Every manned platform is an air-breather and there’s never been the insinuation that saucers are flying ‘through’ the atmosphere.

I’ll read it again, but I’m not picking what you’re laying down — namely the manner in which spit-balling ideas about saucers of unknown origin, moreover unknown mechanics, could influence anything other than water cooler fodder in R&D labs.

Is there a concrete example of tracing a known military asset’s design and function back to musings on flying saucer possibilities?

"But are any operational airframes close to a saucer? In any manner."

Yes, although the documented attempts outnumber the successes. The saucer shape itself is not the sole goal in all this, though. It was replicating the reported flight performance and other characteristics of UFOs. Speed, low profile, stealth, propulsion systems, radar evasion and maneuverability and electronic countermeasures were some of the attributes that benefited the military from studying UFOs.

"Is there a concrete example of tracing a known military asset’s design and function back to musings on flying saucer possibilities?"

The article provides instances of such attempts. The best known examples are the spy planes, but closer still are the unmanned aerial systems. In the drones, we have not only the sleek and stealthy shape, but are free of the G-force limitations of protecting a frail earthling inside. 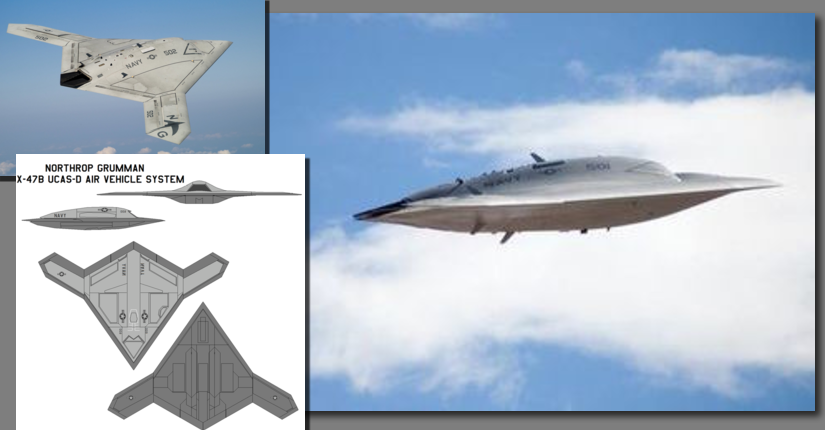 No, they really aren't. The "frail earthling inside" isn't the only limitation with G forces. Pull too many Gs and you damage the aircraft itself. Airframes, even unmanned ones are all G limited. Unmanned aircraft can pull more sustained Gs, but they are still ultimately limited in how many Gs they can pull. 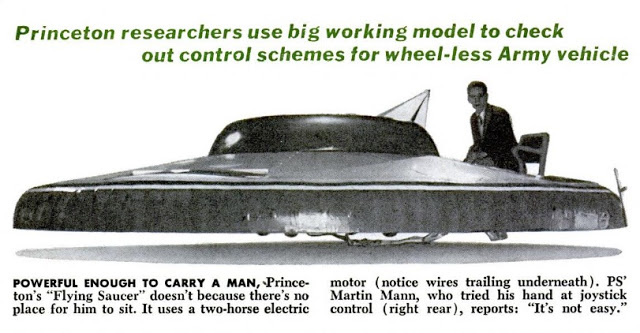 During the 1950s, there were numerous attempts to build aircraft that duplicated the reported performance of flying saucers. There were also experiments to build hovercraft to use as “flying jeeps,” and sometimes these projects intersected. One of these studies was the Princeton Flying Saucer, a project by Princeton University's Department of Aero Engineering developed for the United States Army.

The Saucers That Time Forgot: Princeton University's Flying Saucers for the US Army

It was successful as a one man craft. It was never scaled up larger than that, so it was never determined if it would work well or not. The GEM X-2 and X-3 were evaluated by the Army, but both were only small scale demonstrators.
edit on 5/7/2020 by Zaphod58 because: (no reason given)

Thanks again. The US military obviously paid for research into saucer design and even built and operated some...so we are working on the supposition unknown ‘flying’ craft were the design impetus for these craft, correct?

I don’t have a have better explanation for pursuing such but I am sure some do.

If saucers weren’t seen in skies of the late 40’s does the military pursue such? Can’t say (I’m sure some would argue against the counter factual but we can keep it simple), but we can say the saucer design would still have been unsuccessful.

The thinking was that a saucer shaped craft would be faster and more maneuverable, as well as more efficient. The reality was that, outside of ground effect, they were horribly unstable and almost uncontrollable.

Fair enough. But what was the impetus for “the thinking”? Something had to inspire the design. If it was just ‘outside-of-the-box’ research and later proved as you describe, then it’s “we tried something novel, didn’t work out — the saucer social contagion of that era is wholly unrelated to our design.”

Maybe there were previous attempts by other entities and the US saucer design simply radiated out of that branch of thought/thinking. I just don’t see any lineage or design history or science predating the 40s that gives any credence as to why such a design would be pursued. Even from a common sense point of view, something requiring atmosphere to maneuver, a flying rock seems silly and one of the last basic shapes to employ.

Whatever the real reason (“the thinking”), it happened and it failed. C’est la vie.

posted on May, 7 2020 @ 06:51 PM
link
These guys have apparently worked out some of the bugs of a flying saucer airfoil. They don't show it flying laterally too much, though, or very fast. I suspect for that they'll need high speed rotation, which opens up another can of engineering worms.

Everyone was borderline desperate for a VTOL design. The thinking was that war with the Soviets would start with a nuclear exchange, and most runways would be unusable. So two schools of thought emerged. One saw conventionally shaped aircraft that stood on their tails, or used a zero length rocket assist takeoff. The other saw saucers as the solution. They could use engine exhaust directed out through the bottom for vertical flight, and then transition to horizontal flight, and go supersonic. One study called for a disk shaped craft that could exceed mach 3 at 100,000 feet.

Disk shapes seem to work in small scale, but run into problems when they get scaled up.

Disk shapes seem to work in small scale, but run into problems when they get scaled up.


Even something like a Frisbee has stability problems unless it's rotating, and then there's that tendency to flip. I can only imagine what that would be like approaching supersonic. Seems like at some point you couldn't spin the saucer enough to compensate for the lift difference between the advancing and trailing sides of the disc.

The Avrocar was a disaster looking for a place to happen. They redesigned it multiple times, including trying a t-tail addition, and were never able to overcome the stability issues. It had a nasty tendency to want to pitch up,.

We've been building and flying unstable aircraft for a few decades now.
Thanks to FBW. Look how easy a microprocessor can make a quad to fly.

Stability was the problem, not so much anymore. Not much point in a disk either, anymore.