We don't want her, she is doing such a crap job, she has multiple lawsuits against her.

So OF COURSE, she is being looked at, as a running mate for Biden.

Hopefully everything going on here, ruins her shot.

But boy will she make us pay if it does. LOL
edit on 6-5-2020 by chiefsmom because: spelling

My hospital was losing close to $1 million a day. Far worse than '08.

originally posted by: HalWesten
I hope you're right, I'm sick of Democrat governors trying to ruin our state, driving companies and people out by the tens of thousands a year.


originally posted by: HalWesten
I hope you're right, I'm sick of Democrat governors trying to ruin our state, driving companies and people out by the tens of thousands a year.


They probably fear the retaliation of the Unions. They went after Boeing hard when they opened a factory in SC.

posted on May, 6 2020 @ 09:41 PM
link
The problem she and others like her have is that they are elected public servants.

Somehow they seem to forget the public servant part.

And this one in federal court, also tries to make the old laws unconstitutional.


The lawsuit asks a federal judge to deem the 1945 Emergency Powers Act and the 1976 Emergency Management Act, which afforded Whitmer the power to issue her executive orders, unconstitutional.


“Allowing one person to wield absolute power is not a republican form of government, it is tyranny.”

She will be the face of all to come in America if so,
that is a nightmare scenario.

Hope she loses big in a shamed face way.

Like I said some where else, Michigan will have a new governor. Maybe even before the next election.

If the Dems don't wake up and rid themselves of the leftists communist agenda, they will see their entire party hijacked and lost.

Today's Dems are not Kennedy democrats.
That party is dead.

Quite frankly, from what I've seen Dems are the problem/s they blame others of. Every thing a Dems accuses others of doing they themselves do.

I despise politicians, because any career in politics is a career as a parasite.

History taught me that.

posted on May, 7 2020 @ 07:07 AM
link
Don’t think for a second that Michiganders are all alone. Been a few conversations between some groups in Ohio. Press release today: 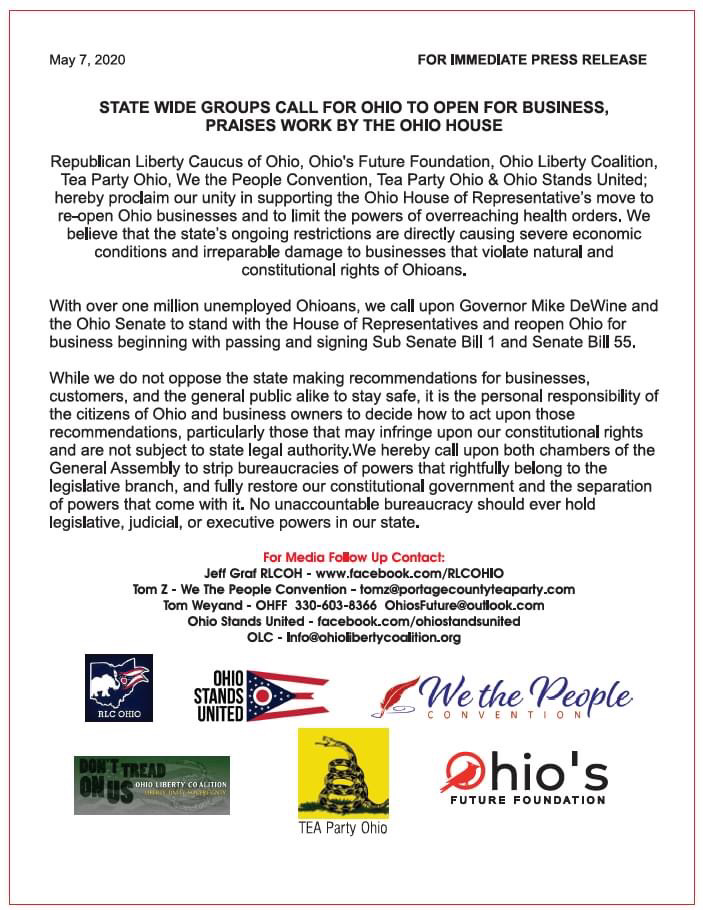 Well, she'd already issued an EO to keep most businesses closed past Mother's Day and Memorial Day, so the lock down isn't a total shock to anyone.

originally posted by: rickymouse
We are looking at a great depression, by her collapsing it even more than it has to be, it will take us way longer to get out of it. You cannot compare this to the great recession of 08, this is much worse than that.

I think that the governor should be held financially personal responsible for abusing her power as governor. You can always find people who believe as you do to collaborate what you believe is right. She is doing that. She is not thinking rationally, she has not been thinking rationally at all since she got elected. She tried shoving the gas tax down our throats and when challenged went on a binge trying to disrupt our state thinking she could blame the Republicans for everything. She has a big head, she lashes back when challenged and infringes even more punishment on everyone she can if someone challenges her beliefs. We do not need a governor like that.

She sounds even worse than Hillary Clinton is....I must now go wash my hands since I typed that. If I said it, I would have to go wash my mouth out with soap.

For real. She could rent out that forehead as a landing strip. Lighting included.

And yes, We the People.
The Constitution must be upheld. And these polticians-with-agendas need to remember they work for us.

People need to get back to making a living, back to living, keeping their states and country strong.

Oh my lord, hello, Is been a long time, almost 4 years,

Nice to see you still around.

My goodness, I thought Hillary took you out.

As a non-American outsider looking in, I have to say that the most disturbing thing for me in this whole miserable Covid saga has been the near-fascist (in my view) EO's issued by some US state governors. Where I live, in a small and rather insignificant country called the Czech Republic, such a course is simply impossible: any and all directives which seek to restrict our constitutional rights can only come into effect if voted on and passed by the parliament. Neither our PM nor President has the right to issue such directives without that support.

Ever since I first studied the US Constitution some decades ago, I have admired it. And as a teacher of young adults here for many years, I held it up to my (Czech) students as an example of a country that while not perfect (as no country is), guarantees its citizens basic and inalienable rights that must not be abridged.

And now, when some of your most basic rights are being taken away at the whim of single individuals (state governors), I can only hope that your high courts will fall back to the Rock that binds you all together as one nation and one people: your Constitution.

To allow some of these more restrictive EO's to stand as lawful would create horrendous precedents, which would plague your nation for many years to come, leaving open dangerous doors for others in authority to further erode your rights. This simply must not happen.

And the jack ass democrats will be scratching their heads come November wondering why they lost the governor's seat to a republican.