Biden Fingered In 1988 As A Liar And Imbecile By MSM

originally posted by: LogicalGraphitti
a reply to: IAMTAT
You shouldn't put "fingered" and "Biden" on the same line. Can you guess where my imagination was headed?

Biden once dropped out of a presidential race because he plagiarized something.

So politicians get do-overs?

originally posted by: MiddleInsite
Wow, and I couldn't even tell you what I was doing over thirty years ago. Maybe he did something when he was five or six or ten. Maybe we should all look into it?

Do you remember how many degrees you earned in college?
Whether or not you were in the top or bottom half of your class?
If you received a full scholarship or not?

As for what Biden did when he was a kid...Joe remembers ALL about 'Corn Pop' (aka "Esther")...and how "Corn Pop was a bad dude".
He also remembered something about kids rubbing his hairy legs in the pool.

Biden once dropped out of a presidential race because he plagiarized something.

So politicians get do-overs?

originally posted by: MiddleInsite
Wow, and I couldn't even tell you what I was doing over thirty years ago. Maybe he did something when he was five or six or ten. Maybe we should all look into it? LOL! ATS cracks me up lately.

Remember when they went after Justice Kavanaugh for something that he was accused of doing in high school? When you open those gates don't complain when they will not shut.

Last time I checked, it was called a resume'. Or a CV.

We all have them.

originally posted by: mtnshredder
or C: "I did none of the above and I'm a lying dog-faced pony soldier ".

I started it here.

posted on May, 6 2020 @ 06:49 PM
link
He was full of malarkey back in those days. This video highlights the reason Obama chose him as his VP. Obama needed a dishonest lying corrupt POS just like him so he could loot and destroy with like minded people and no one would tattle since the entire crop of foul humans he chose and appointed were all carbon copies of stinky toxic cesspools of sin and wretchedness. Perfect for their vision of what the world could be with their help.

How to take credit for things you never even did was an Obama favorite that Joe Biden showed him and he ran with it for 8 years.
Yes, the truth always does come out for all to see.


originally posted by: mtnshredder
or C: "I did none of the above and I'm a lying dog-faced pony soldier ".

I started it here. 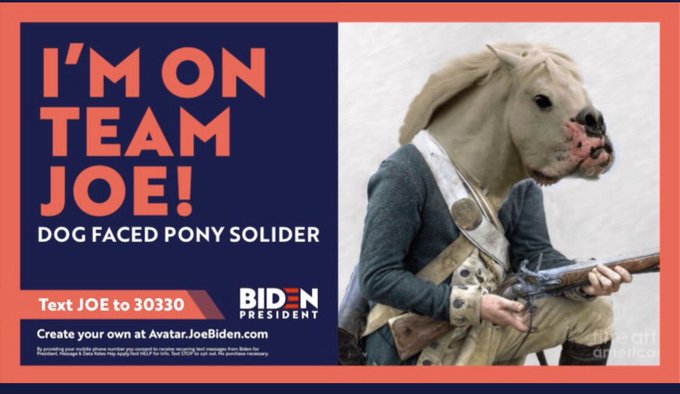 posted on May, 6 2020 @ 08:07 PM
link
What is the scariest part of this whole election is that people are willing to give the country over to this guy. This guy has been a liar and now a liar who cant remember his lies. Which I guess means he technically isn't lying, if two negatives make a positive.

People are willing to vote him in to get rid of a President, who has done nothing but try and make this country and its people better. I am completely dumbfounded that people would honestly entertain voting him in office. He is losing his mind....... If you watch him it is degrading to him to have him continue to try and look like he doesn't have any issues. Wake up America!!!

Yep. He's a serial liar/plagiarist from way back.

He's' also a known c%$!-holster for Delaware banks (and big banks in general) and a full-time, neo-liberal warmonger. The more you know!

posted on May, 6 2020 @ 09:45 PM
link
Biden hasn't done jack squat his whole life. Most of the things he said he did he makes up in his mind and people still vote for him. Hey, if it works why not do it. Just make up nonsense for a living. Sounds like an awesome job which it was so he kept doing it. Mentally though he is finished. His brain is fading like HAL and he can feel it.

posted on May, 8 2020 @ 04:15 AM
link
REVEALED: TARA READE is the 8th Accuser to file complaints against Joe's perverted and/or criminal sex assaults.

Even Liberal Polls have Biden taking a dive: www.breitbart.com...

posted on May, 8 2020 @ 04:40 AM
link
Dems rip on Trump for being a so-called pathological liar but say nothing about biden. If you catch Trump in a lie and call him out for it - that's fine with me. Just do it to biden too, and obama, and pelosi, and aoc, etc. Calling out one side and ignoring the other makes you a liar too.

Trump is a bit crude on occasion, perhaps unsophisticated. He tends to be enthusiastic with his terminology and exaggerates sometimes. Honestly, I often find it annoying. But that doesn't mean people should run off shouting about impeachment.

Lets be honest here. If I were to compare a guy who says:
"This economy is better than ever."
"I wore a mask but you didn't see me."

With a guy who says:
"I forgot I didn't graduate from college with three degrees and in the top half of my class."

I think I can tell which one is the pathological liar. Furthermore, lying (if it was a lie) about wearing a mask while touring Honeywell is a popcorn fart in a tornado - it amounts to nothing. Lying about having three degrees when discussing your qualifications to hold political office is entirely different.