posted on May, 5 2020 @ 04:00 PM
link
a reply to: Trueman
more likely he is gathering intelligence for his debriefing when he is released into State Department custody later this year.

Why interfere with another nation, it was bad enough hearing about supposed Russian interference in 2016 elections but this is actual evidence of American "contractors" within another nation attempting to influence sovereignty

I thought Americans were against being the world police these days

Something smells fishy and it's not fish..

Why would they have passports if they were sneaking into Venezuela?

An American passport might save your life. It still doesn't add much sense to the story though.


Edit: yesterday when this dropped, it was said that Venezuela was tipped off from an anonymous caller from California. Also a pic of the team in a small rowboat. Article has since disappeared.
edit on 5-5-2020 by Bigburgh because: (no reason given)

posted on May, 5 2020 @ 04:23 PM
link
a reply to: Bigburgh
A call from California?? Better believe Diane Feinstein tipped them off. She does sit on several committees, oversight and intelligence. Perhaps this could be the thing we can finally indict her for. Bad enough she openly stated she wanted to confiscate every single American firearm, while keeping her own of course.

This is from May 1 involving 300 men in another operation .

The failed attempt to start an uprising collapsed under the collective weight of skimpy planning, feuding among opposition politicians and a poorly trained force that stood little chance of beating the Venezuelan military.

“You’re not going to take out Maduro with 300 hungry, untrained men,” said Ephraim Mattos, a former U.S. Navy SEAL who trained some of the would-be combatants in first aid

The only thing I learned from this is that somebody should convince Goudreau to quit watching John Wayne movies .

posted on May, 5 2020 @ 05:25 PM
link
Adding to what doesn't make sense; it appears they've attempted this in broad daylight. Surely you would use the advantage of the cover of darkness and stage your landing then?

The blokes in the boats would have been a lot harder to shoot in the dark.

Doesn't add up.
edit on 552020 by IAMALLYETALLIAM because: (no reason given)

You can put the tin foil hat down. There's a very good chance this is a ploy. If this was a plot to overthrow him, it's as amateur as you can get.


Superpopem
Superpopem
1 hour ago (edited)
Okay just so you all know. I'm from Venezuela and the official story is as follows: this group of mercenaries are drug traffickers who work directly for tarek william saab. They were escaping from Venezuela and had valuable information on routes trade contacts etc. The reason they had their ids is because they brokered a deal with the DEA and were due to being picked by the DEA. The escape mission failed so now they will most likely be tortured and killed.

"We knew everything," Maduro said, claiming to have had eyes on Goudreau at every stage of the plot. "What they ate, what they didn't eat. What they drank. Who financed them. We know that the US government delegated this as a [US Drug Enforcement Administration] operation."

originally posted by: Grimpachi
The escape mission failed so now they will most likely be tortured and killed.


That's why I never wanted to be a mercenary. Not much of a future.


Like the c4 drone thing back in the day? I don't think so... Here's what I've got so far (probably missing a bunch).

The CEO allegedly confirmed all this on the companies twitter Though, he hasn't had a post in a year. There is also a recruiting videohe put out through twitter via another account trying to recruit defected Venezuelans.

There has been an alleged contract leaked that has him in agreement with Guaido. 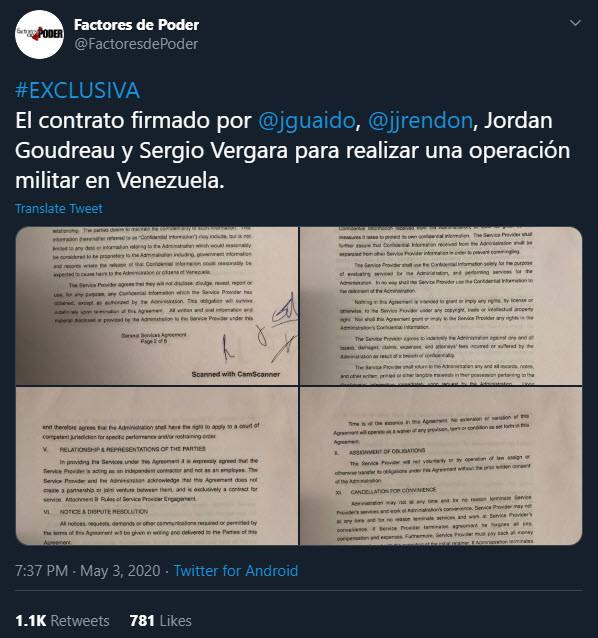 Then there is the pictures of confiscated gear. 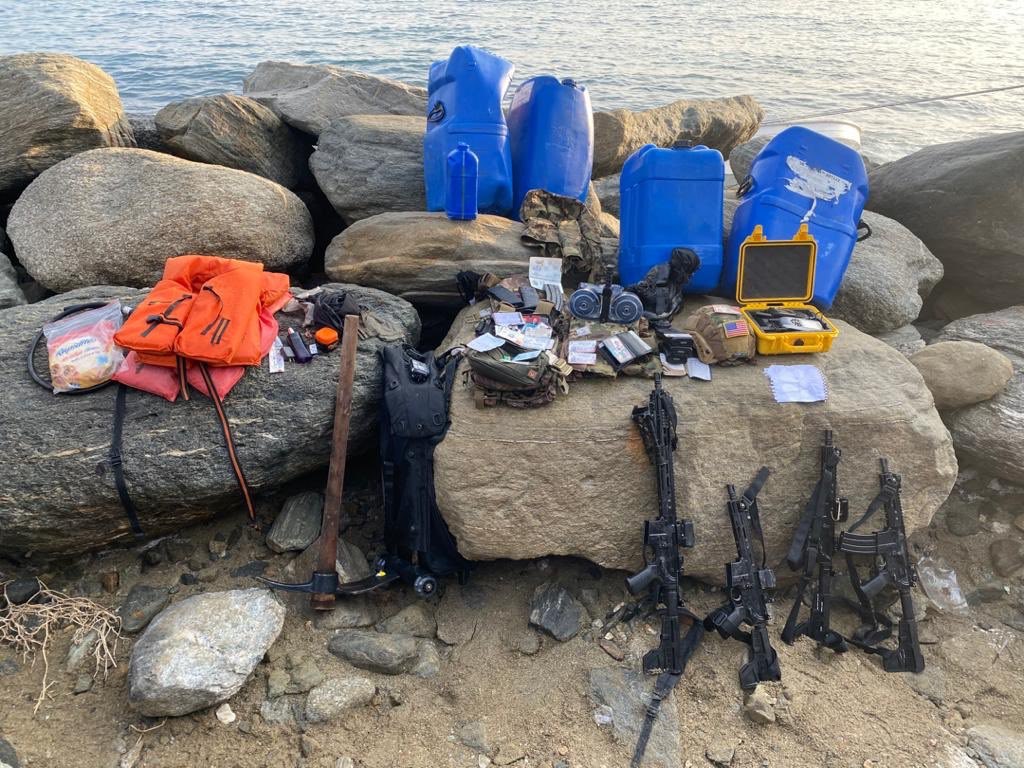 Why would they have an American flag on the helmet, and what's the pick axe for?

There's a lot more I won't include in the interest of not going on too far. here's a good Bellingcat piece that has a lot more.

Somehow Maduro is doctoring this up, but this would require he was able to keep the Silvercorp twitter undetected as a front for so long (he had control of it)... And a lot lot more. So I doubt it.

In the Bellingcat piece, it shows Silvercorp did security detail for a Trump rally a while back, this seems to be confirmed. There are rumors they had contact with the Trump head bodygaurd... So one story goes this was an attempt by the admin for a Bay of Pig style attempt. Now, this is interesting given the president's odd campaign for an increased drug war, with a focus around Venezuela. This would place assets close by if Maduro got taken out. But I think Erik Prince and his Mercenary force would be far more capable, and Erik has been trying to court the admin for some time. I'm not leaning towards this theory, but I can't dismiss it.

You could wonder about the inverse of the above, with all that circumstantial evidence, an opponent of Trump could have tried to set him up. Though there is no evidence that I've found of this.

Or the CEO was really money hungry, the contract was real, and he's just a supreme f* up.

The whole thing is concluded, and I doubt we'll ever be fully convinced. This may even get brushed under the rug given global events.

Its just tidbits and my attempt at a short summary of what I've been looking at today.