Memories of First Albums and Songs...

posted on May, 4 2020 @ 07:09 PM
link
So, I'm sitting here on the porch drinking some Guinness, getting ready to open a bottle of wine, and listening to one of my all time favorite albums: Abbey Road. It brings back memories from many years ago when I used to listen to it as kid. I remember one Christmas I got one of those cheap ass stand-alone stereo units (not hi fi) that had a dual tape deck, a turntable, three band EQ, and two 3' tall cheap ass speakers (all of which I still have in the attic). What's the logical next step? Go through my dad's records and start sampling #.

I listened to a lot of different albums and found a lot of good *songs*, but finding a good album, at least to me, proved elusive, or maybe I just didn't give enough of them a chance.

But the few albums that absolutely blew me away?

Abbey Road, especially side B. I would listen to that petty much every night lying in bed. That's how I feel listening to it right now, those magical memories of youth, lying in bed, discovering music from before your time when I was supposed to be asleep, taken away to a new, sonic landscape. And since I trouble falling asleep, I would listen to it again. And again.

Sometimes I would mix it up with the soundtrack/score for Last of the Mohicans, which I had on cassette, because it was such pure bliss, revisiting each scene in my head as each song played.

Another album is Dark Side of the Moon. For some reason, my dad did not have that (or any Pink Floyd, for that matter), on vinyl, but he *did* end up buying a cassette. I'm not sure how I started listening to it, but I imagine it was from hearing "Money" and asking about it. Anyway, every week as I was cutting grass (and we had a huge yard), I put that cassette in my walkman, hopped on the Snapper mower, and cut grass while listening to that from beginning to end and singing at the top of my lungs. I still remember cutting around the swing set while listening to "Side B."

Later, I bought the vinyl at a record joint in Little 5 points, and still have it. I still don't know why my dad didn't have any Pink Floyd, but he had every Beatles album though, thankfully, and early Alice Cooper. Led Zeppelin.

Goodbye Yellow Brick Road is another that blew me away, but there's hardly a story there. I just remember sitting in my room listening to the awesomeness of Love Lies Bleeding, Candle in the Wind, and then Bennie and the Je-Je-Jets.

Another album is Nevermind. I remember when Smells Like Teen Spirit was THE song, and the music video played nonstop on MTV. Yeah, back when MTV actually had music. And videos. And good music. And good videos. Anyway, I would jump around my room and beat the # out of my bed with various objects, and when the song ended, I was so sad, because it was such a great song. And I'd wait until they'd air it again.

Eventually, I went to the local music shop and bought the cassette.  I was at my grandparents' the first time I put it in my walkman, and after the SLTS, when the next song started playing I was mesmerized. Hooked. I laid down on the love seat and listened to the entire thing. I remember that day well.

I could tell you about the first time I heard Mechanical Animals, which I received for Christmas, while driving to my grandmother's that same day. Every time I start listening to that album, I think of driving down there.

I could tell you about the first time, when it first came out, I put The Downward Spiral in the boom box, pressed play, and was speechless because I had never heard anything as powerful, raw, and as abrasive that before. It was an assault on my ears, and it was spectacular.

And I could tell you the first time I heard Light My Fire, listening to a college radio station while driving home from school #d as #, and when I pulled into the driveway just sat there until the song finished and barely able to speak.

I could tell you about all of those, and so many more.

Now tell me yours...

originally posted by: Liquesence
Now tell me yours...

The Greatest Friends You'll Ever Have

Thanks for sharing the memories.

posted on May, 4 2020 @ 07:32 PM
link
I remember listening to my Dads Hank Williams , Buck Owens and George Jones albums . He passed last year and his old LPs are now in my collection (I have a couple of thousand albums) .

My uncle introduced me to Jim Croce and CCR in the 70s . Those albums are now in my collection also .

The first albums I purchased with my own money was Motley Crue's To Fast For Love (just took it off my turntable) , Jimmy Buffett's A1A and Hank Williams Jr's Habits Old and New . Odd mix , I know , but I have eclectic taste in music .

Queen's Greatest Hits was also one of the albums I uncovered way back when while going through his records, and used to listen to the hits, so that was my first exposure.

"Hello, my name is Johnny Cash "

Please tell me somebody remembers that.

That's pretty eclectic, I like. It reminds me of me and my tastes and compositions.

But I love me some blues.

When I was about 10 me and my two brothers were allowed to stay the night at our friends house with two other boys. Their parents went out to the bar so we were free to go wild.

The boys wanted to roam the streets but I had other plans. I had discovered their big badass stereo....and they had the new Metallica black album!

I headbanged for hours until the other boys finally came back. My neck was sore for days, it was worth every minute. What a feeling!

Starting around that same time I started listening to classical music on my local WNPR (National Public Radio) station. I listened to it every single night up until my thirties when I moved away from that station and discovered other means of listening.

I'm always chasing the good stuff and eager to find something new to get my fix.

I found this about 6 months ago. Its one of those rare songs that gave me that good good deep down emotional rush that I crave. I hope you enjoy it as much as I do. I drink a beer with you my friend. Great topic!

I also remember my Sr year in High School , we were growing weary of hair metal bands , one was just like the other . My buddy shows up to my house with a case of beer and an album from a new band . He said I had to hear it . It was Guns and Roses "Appetite for Destruction" . Put it on the stereo and blew me away .

I put that on the turntable , turn it up to 11 and shake the house off the foundation when I am mad at the world .

Your post reminded me of my first true record player:

Somehow I had some records, stupid children's stuff like Donald Duck, He-Man (which I think I still have), and went to Toys R Us to get a kids' record player. Granted this was way before the OP, and was maybe 7 or 8, and I remember whoever I was with (dad?) pointing to one that had cartoons like Donald Duck on it. But I eyed a different one. This one has "monsters" and "blood" on it. I had no idea what it was or why, but since I grew up with horror movies and zombies, they bought it for me.

A couple of days later my cousin, who was several years older, came over. "OMG you have a KISS record player?!?" I'm like, who the hell is kiss? I just like the monsters and blood, lol.

I wish I still had that thing...

It was Guns and Roses "Appetite for Destruction" .

I remember when that came out!

I wanted that so badly (Paradise City was the #) and I begged my dad and step mother to get it for me. My dad was always cool as #, but my step mom was like "An album title like that?" I'm like, you have AC/DC albums, c'mon.

I never got that album until the season had passed and I was growed.

originally posted by: DAVID64
1969.
I was 5 years old and my first 45 was Johnny Cash. Folsom Prison Blues.
Had one of those old 45/LP record players and I wore than thing out.

"Hello, my name is Johnny Cash "

Please tell me somebody remembers that.


Being born in the 80's, I discovered it much later, but oh boy I sure remember that album! Also late in Cashe's career he did a few albums with Rick Rubin. Rubin let him have creative control and he also insisted on Cash doing 'Hurt' by Nine Inch Nails (Trent Reznor) what an absolute master piece that album is!

I love old school country music . I do not like this new stuff though . Hick hop and bro country is terrible .

I like the blues also, Robert Johnson (of course) and Son House are my favorites . 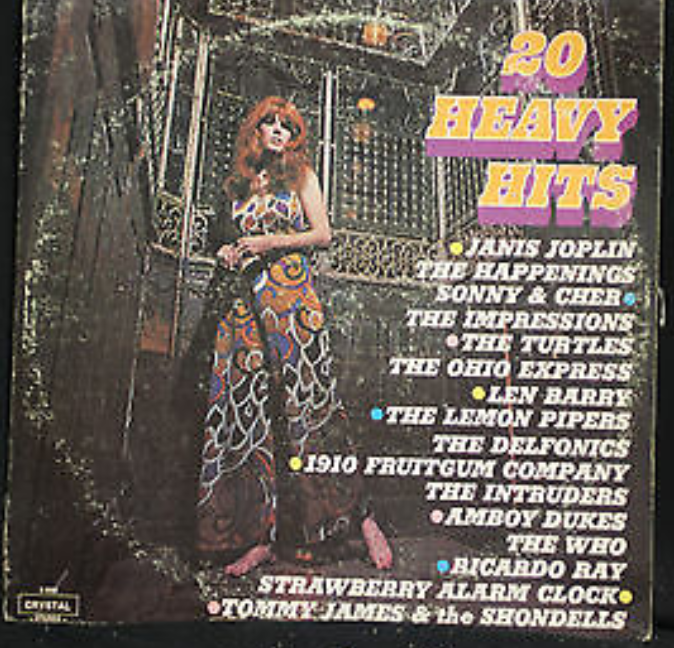 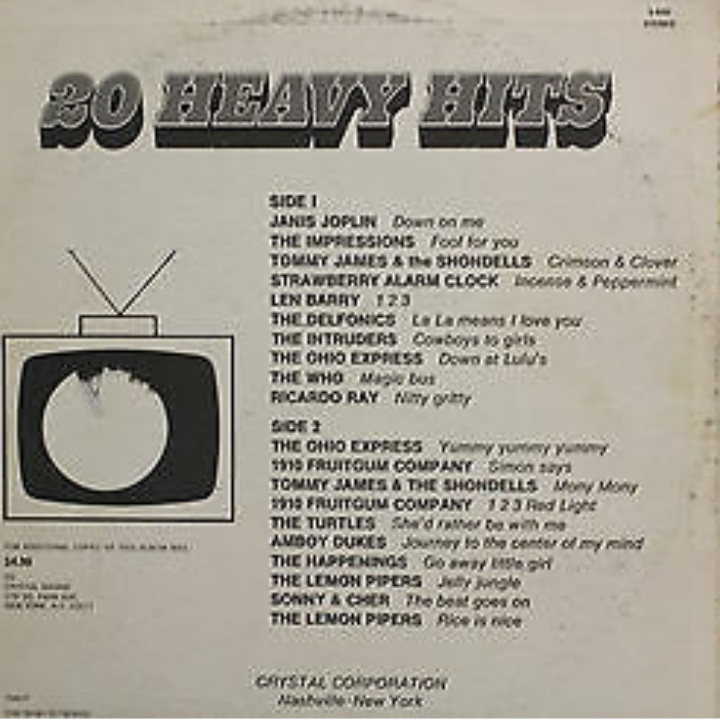 Some great tunes and I still have it

Sometimes I'm actually glad I'm "old". I got to see John Mellencamp when he first started off as Johnny Cougar.
I saw Van Halen when they still had David Lee Roth and saw the 1984 album live at Robert's Stadium in Evansville Indiana.
I saw the Styx Grand Illusion tour.
I saw RUSH IN 1976.
I saw Bob Seger and The Silver Bullet Band the same year.
...and more than I can mention or this'd turn into a 3 page reply.

So may concerts, so many memories...thanks for bringing it all back.

There was a guy I went to school with who introduced me to the black album around the time it was becoming popular. His name as Eddie Lederer (seriously) and all through class he would sketch drawings of skulls with snakes and daggers and stuff and give them to people.

Weird dude, but he was a Metallica fiend, lol.

And that is one great album. Even the hits are mind blowing (Nothing Else Matters, Sandman, Unforgiven) , and I usually consider the "singles" in some albums the least best.

Now I wanna listen to that.

I also used to listen to NPR classical and buy a lot too, around that time. Classical is a great escape, even now.

posted on May, 4 2020 @ 08:13 PM
link
One of the first things I remember listening to regularly when I was little was a cassette tape of Ministry's Twitch album.


I still have a couple of drawers full of concert tees . For some reason they all shrank . The only one that still fits is my Journey quarter sleeve tee and I wear it still .

Greatest concert I have ever seen was Alice Cooper in Charleston WV in the mid 80s .

Greatest concert I have ever seen was Alice Cooper in Charleston WV .

Yesterday, I found my Constrictor cassette hidden away in storage covered in dust.

The Jason VI theme is on that album.

My first concert ever was Alice Cooper, Trash Tour. 1991.