Asia's 'murder hornet' lands in US for first time 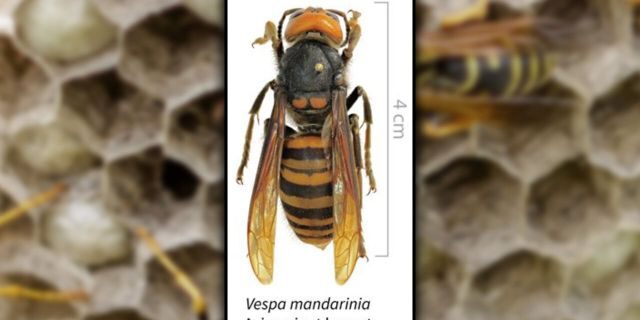 The invasive Asian giant hornet has been sited in Washington state for the first time in the U.S. (Washington State Department of Agriculture)

Deadly hornets from Asia that measure up to 2 inches long have been found for the first time in the U.S., with researchers worried that the insects are colonizing, the New York Post reported Saturday.

The “murder hornets,” as the aggressive insects are known, can wipe out bee colonies within hours and have stingers long and powerful enough to puncture beekeeping suits, according to the paper.

In Japan, the hornets kill up to 50 people a year, according to the New York Times.

In the state of Washington, beekeepers have already seen the hornets devastate their hives, according to the paper.

The Bellingham Herald in Washington reported Saturday that the State Department received and verified four reports of Asian giant hornets near Blaine and Bellingham in December 2019.

Members of the Mt. Baker Beekeepers Association have put up traps and are monitoring them as part of the state’s efforts to find and kill the invasive pests.

“This is our window to keep it from establishing,” Washington state entomologist Chris Looney told The Times. “If we can’t do it in the next couple of years, it probably can’t be done.”

Those were the first sightings of the hornets in Washington state and the U.S.


The hornet dwarfs other winged insects, making the yellow-head bumblebee, bald-faced hornet and western yellowjacket seem small in comparison, and even when compared to the burly bumblebee. Yippie, what's next in store, Asia?

They are not slow and cumbersome....more like in a league above our speed. Maybe don't try swattin one that big and fast.
edit on 3-5-2020 by GBP/JPY because: (no reason given)


That individual is incorrect, as I posted in the same thread right here.

When you read or hear about "Asian hornets," you need to keep two things in mind. First, the "Asian" moniker has been commonly applied to at least three hornet species native to various Asian regions. These include the Yellow-Legged Hornet, which is sometimes called the Yellow-Legged Asian Hornet (Vespa velutina); the Asian Giant Hornet (V. mandarinia) which is the world's largest hornet; and the Japanese Hornet which is a subspecies (V. mandarinia japonica). 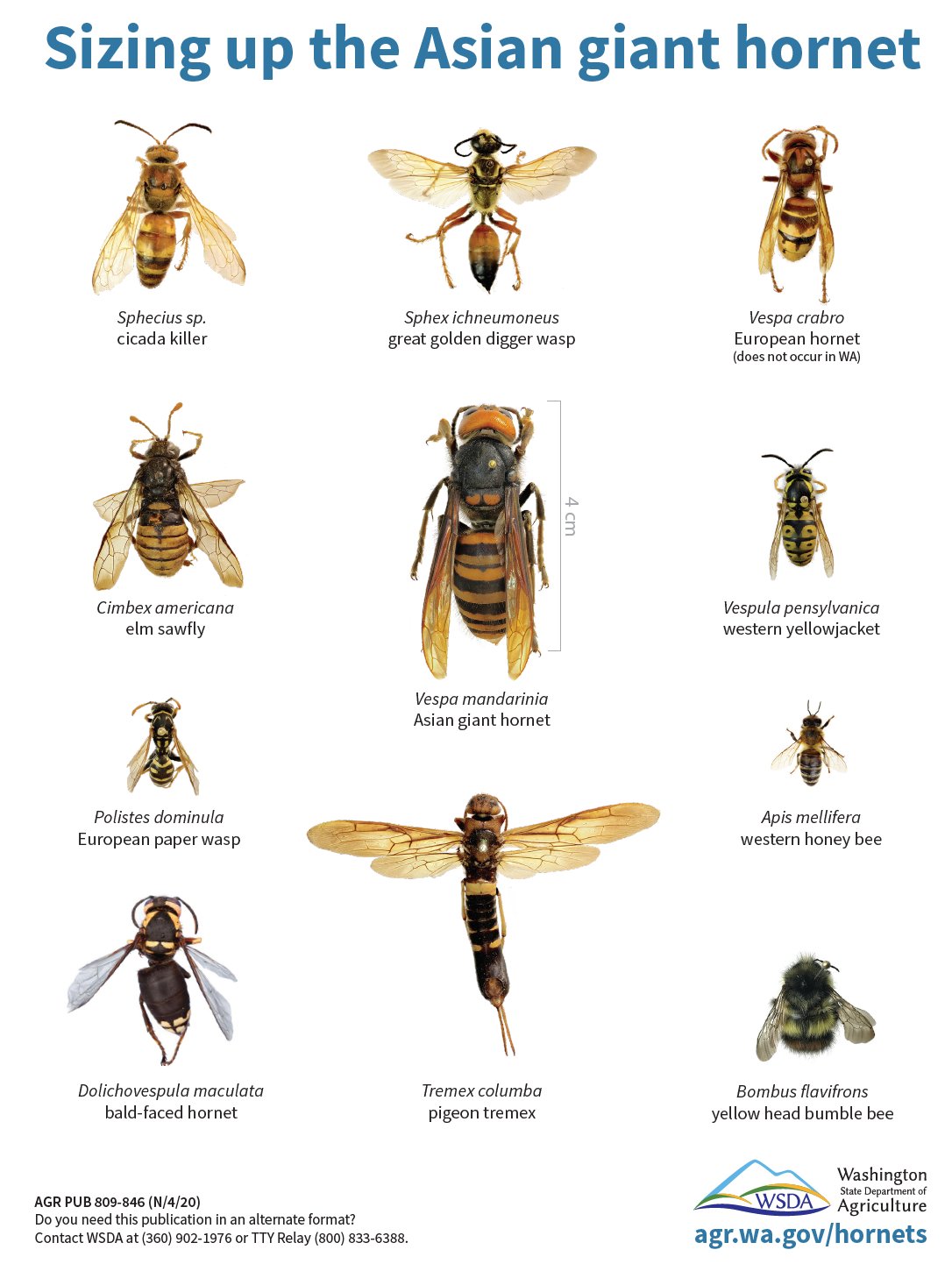 Image Source
edit on 3-5-2020 by Liquesence because: (no reason given)

posted on May, 3 2020 @ 05:03 PM
link
Back when I was in Spain there was this same hysteria going on about the vespa velutina. this asian hornet has only one local predator, they are similar in size but their legs are black, the asian one has yellow legs, otherwise they look identical.
We had some guests over and one of these huge buggers came flying into our living room. The two start freaking out about how dangerous they are and we should kill it, so they capture and drown it. Turns out they killed a local wasp. I thought how stupid can you Bee(pun intended) to let yourself guide by fear to the point you kill a somewhat beneficial creature.
It's Asian scare all over the place, first the asian flu(sorry for being racist i mean Covid19) now the asian wasp(wait... what? where are the SJW calling this racist?).
what's next?

Before you mobilise the national guard in the war on hornets learn about all the hornets there are and how to identify them.


Sightings of the Asian giant hornet in the U.S. have created quite a stir, but these accounts are cases of mistaken identity. Those reporting Asian giant hornets in North America are most likely seeing bald-faced and European hornets or cicada killer wasps.


The Asian giant hornet is often confused with the yellow-legged hornet (Vespa velutina), also known as the Asian hornet, an invasive species of major concern across Europe, including the UK.

Sincerely NC
edit on 3-5-2020 by NoConspiracy because: (no reason given)


As CT's tend to do you cherry picked data and left out the part where at least two of us said the OP is wrong.

I cherry picked nothing. I stated this story was posted before, gave the OP's position, and linked to the thread.
More so, I used the term "suggests" in my response which is a neutral term neither giving or detracting value to either OP's position.

No need to. The other was in the mud pit.

As I understand it, a topic can existt both in the pit and elsewhere.

Oh, I've had my run ins with those bastards, luckily nothing too extreme.

When I was in high school, My dad rented a house and later that year we started noticing yellow jackets in the house. Come to find out, they had made a nest in the rafters at the top of the cathedral ceiling between the drywall and the OSB roof. He found where they were entering, and after shooting bombs into that hole, the nest finally broke thought the ceiling and there were hundreds of dead jackets.

When I was in college I worked for landscaper, and while string trimming I got into several nests. I ran like hell, and those bastards followed me, me slapping at them. On that same property, we'd pour gasoline down the hole and light it on fire.

I few years ago I was out working in the yard next to this oak tree, and I happened to look over. Now, this oak "tree" has 4-5 full sized trees growing from the base, and one of them is diseased with a huge wound running about 5 feet from the ground and several inches wide creating a nice nook. Inside was a hornet nest, not a bald faced hornet but the huge ass European ones.

I'm thinking, how can I kill the nest and not die? So, I googled a little bit, and figured, hey night is best. I drove my car up there, shined the headlights to the nest, cracked my window, and using a can of wasp/hornet killer, started to spray. They attacked my car, headed right for it. Window up, drove back to the garage, some were still clinging to the car, and some were were still flying the 2-300 feet towards the garage light. So, they definitely don't play, ok.

Hit Google again, and found out they can't see red light very well, or that they don't see it as light on order to attack. At work, I got some pieces of red gel from the electricians, and when the weekend arrive wrapped it around a couple flashlight, went back to that nest, and sprayed their ass to death.

No need to. The other was in the mud pit.

As I understand it, a topic can existt both in the pit and elsewhere.


Because the mud-pit is troll garbage.

Let's hope they're able to contain and destroy this particular bug from Asia. Hopefully we learned the lesson that not shutting it down as soon as possible can have dire consequences.

Its not the handful of people killed by them every year that is the major concern here (well, except for those who get killed, of course), but the bees. The poor bees - beset by Monsanto, and no possibly an invasive hornet which - once it gains a foothold, will likely never go away.


Yippie, what's next in store, Asia?

If we didn't have to have a large amount of our produce and other stuff brought in from another country we wouldn't have this.

Just like the medicinal problem that Covid has brought about. We need to stop relying on other nations for our food, medicines and products. We can only do so much as even within the U.S. ecosystem as bugs and insects are ripe for travel. I've seen wasps from California end up in Arizona produce. Nice sized wasps would fly all over the store once they got released.

That's "local" so what would you expect with international trade? Trust me, much of our produce comes from out of the country and I know this from working in the natural foods industry. I once saw organic bell peppers come from IIRC the Netherlands to Santa Fe, NM. At a cost of five bucks a pound and people bought it. Yeah, travelling all across the world makes it better? We can't grow organic peppers here?

Those who buy organic are more likely to spread insects and bugs like this. At the first place I worked at, not in Santa Fe, is still happened. Organic farming actually has a drawback as these creatures can survive without the pesticides being used, obviously.

It ain't just Asia that's causing the problem. I'm sure you meant that in jest but come on, can't blame them for this.
edit on 5/6/2020 by TheSpanishArcher because: (no reason given)