UFO Shoots "Beam Of Fire" At Men And Their Equipment In Edinburg, Texas In 1966

posted on Apr, 30 2020 @ 03:52 PM
link
I just located an interesting story that perhaps not many of you have heard about. It's about a UFO sighting that occurred in 1966, just North of Edinburg, Texas. There's a lot of documentation on this incident, yet I couldn't locate a past thread on it on ATS.

Edinburg, Texas is located in south-central Hidalgo County, which is part of the Rio Grande Valley. Edinburg is also located 8 miles from Moore Air Base, which in 1963, had been transferred from the USAF to the US Department of Agriculture, which used the base to eradicate the screwworm fly.

Moore Air Base is an inactive United States Air Force facility located fourteen miles (21 km) northwest of Mission, Texas. It was deactivated on 1 February 1961. The installation was sold to private concerns and partially transferred to the Department of Agriculture on 15 July 1963. 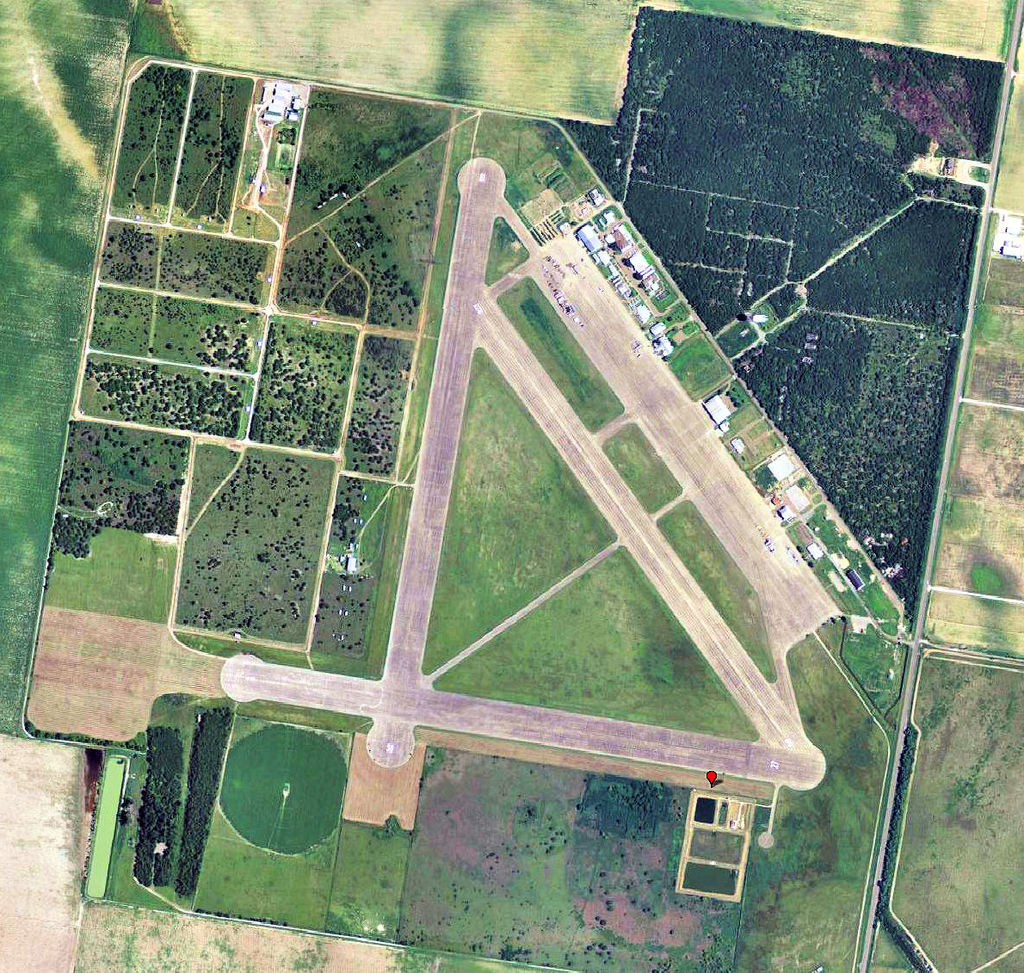 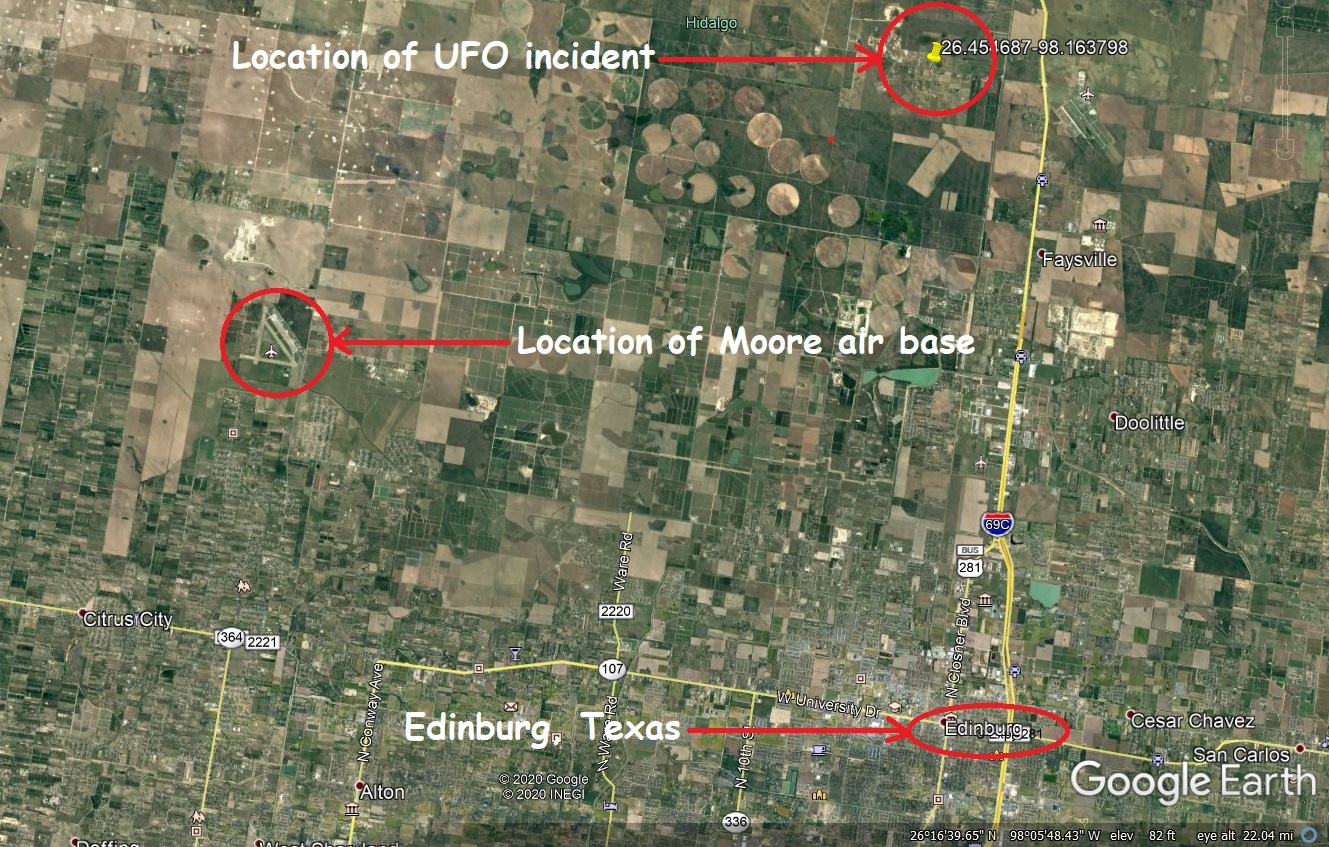 On the day of the incident, eight construction workers were working at a gravel pit around midnight, when they witnessed several bright UFOs in the night sky.

One of the men later told sheriff’s deputies that he was "so frightened that he urinated in his pants."

According to the workers, one of the UFOs, which was a “cigar-shaped object,” shot a “beam of fire” at them.

Firefighters eventually arrived at the scene of the fire, but by the time they got there, the flames had mostly died out. Among what was damaged or destroyed by the fire was: a 12’ x 60’ mobile home that the crew were using as sleeping quarters, a couple of pick-up trucks, a bobtail truck, and an excavating machine.


In October or November of 1966, J. R. “Milo” Ponce, a deputy sheriff with the Hidalgo County Sheriff’s Department, received a phone call at around midnight from the sheriff’s department dispatcher, George Rapp. The dispatcher stated that someone had called in to report a group of “disturbed” men standing alongside Farm to Market Highway 490, north of Edinburg, Texas, near Laguna Seca Road.

The eight men, who were digging a gravel pit in the area for a company out of North Texas, were greatly agitated. They were yelling and screaming for help alongside the road. A motorist must have seen them and then driven them to a nearby truck stop, from where they called the sheriff’s department.

According to Joe, “When my father received a phone call from the sheriff’s department, I heard him asking George Rapp, the dispatcher, if it was serious or if it was a prank call. Rapp told him that the men seen along Highway 490 appeared to be very frightened about something they had seen, and they also said they needed help putting out a fire. My father got dressed, got in his vehicle, and responded to the call.”

The site in question is a ranch located approximately four miles west of Highway 281, owned at the time by Samuel Gonzalez, now deceased, and now owned by Mary Moya. The charred and burned area was about one quarter mile into the ranch next to some very large gravel pits.

The pits were being dug out by a crew of eight men from north Texas. The men, who were all “Anglo” and whose identities are not known, were “roughneck” types. All of them told the same story of that eerie night. One of the men had been so frightened that he urinated in his pants. The men were later taken to the sheriff’s office, where they were interviewed and then allowed to spend the night. They told sheriff’s deputies that they would never return to the site of the incident, and they reportedly left town the next day, happy to escape with their lives.

Milo Ponce’s son, Joe Ponce, says, “Although I did not witness this incident, I heard several different people give the same details about it at separate times. There was a police report filed, but I don’t know if it would still be around. I will tell the story as I heard it from my father.”

The workers told deputies of having seen bright lights in the sky and of hearing a loud humming or throbbing sound. They also experienced sudden, strong winds on an otherwise calm night, and they saw flames shoot down out of the sky, presumably from one of the UFOs that had been previously seen hovering in the area. The beam of fire set ablaze all the surrounding area, including their vehicles and their mobile home.

A local resident, known as “Manito,” who lived near the caliche pit, reported seeing a “cigar-shaped object” that hovered over the field that night. Manito had seen this and other bright lights hovering over the surrounding fields prior to the night of this incident. The gravel pit workers themselves stated that they had seen strange lights hovering around the area on other occasions, prior to the night of the fire. Spanish-speaking people who lived near the area called these eerie night lights “La Luz del Llano,” which in English means “the light in the fields.” According to Joe Ponce, this area has been known for years as the site of strange phenomena.

Ponce says, “Years later, after I returned from the Army in 1972, I visited the area with my father. He pointed out the location and you could still see an odd shape area where nothing would grow. The sides of the pit appeared to have been burned all the way to the top 25-30 feet high.”

Joe Ponce says that Sheriff E. E. Vickers told his dad that he had been approached by two men dressed in military uniforms asking to see the report about the incident. Vickers, a resident of Donna, Texas, was the county sheriff from 1955 to 1969. Apparently, Vickers thought the men might have come from Moore Air Base, which is located about six miles southwest of the site where the incident happened, but the base had been closed by the Air Force in 1961 and was no longer a military institution at the time of the incident.

“No more was ever said of the incident and my father never spoke about it anymore,” Ponce says.

It should be noted that the three-day Edinburg UFO Festival, which started in 2011, was inspired by this 1966 UFO incident. 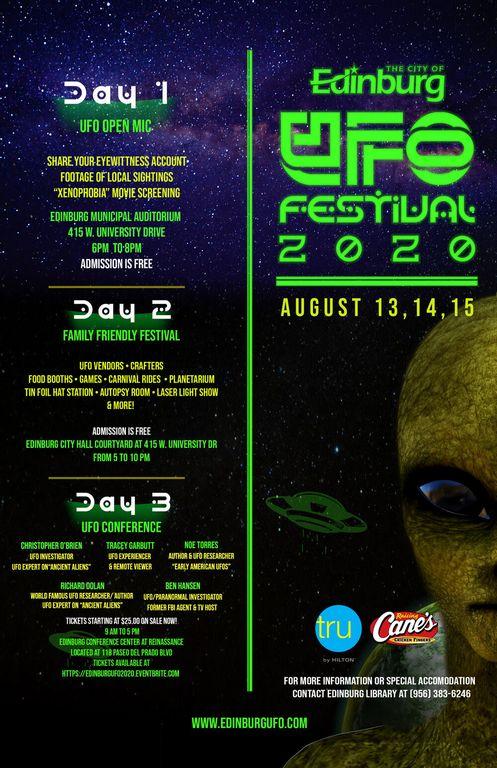 Drone footage taken at the Edinburg UFO Ranch on April 5, 2019:

2017 Seminar at the site of the incident by author Noe Torres and Joe Ponce, who was the son of the main witness:

posted on Apr, 30 2020 @ 04:47 PM
link
Another case where strange lights had been seen before the main event, and I wouldn't mind betting that they had been seen around for years before.

Fascinating find, shawman, and as wonderfully presented as ever. Nice to know there are still some hidden gems out there. You beat the great Karl to this one, lol.

Funnily enough, what drives this story's interest from the off is that one of the so-called "roughnecks" was actually prepared to admit that he literally wet himself - that takes some courage!

I haven't yet watched the videos you provided, but I'll get onto those right away.

originally posted by: visitedbythem
Remind me not to shoot at them...

At the roughnecks, or the aliens? :p


PS: Coronamania will probably keep our space cousins away for the moment, though.

originally posted by: visitedbythem
Remind me not to shoot at them...

Remember that next time you're "vistedbythem"

Never heard of this before and really enjoyed the read and videos. Great post & Thanks for sharing this with us!


originally posted by: visitedbythem
Remind me not to shoot at them...


Remember that next time you're "vistedbythem"

There was no time to get to a gun in my house.


On August 1, 1966, after stabbing his mother and his wife to death the night before, Charles Whitman, a former Marine, took rifles and other weapons to the observation deck atop the Main Building tower at the University of Texas at Austin, then opened fire indiscriminately on people on the surrounding campus and streets. Over the next 96 minutes he shot and killed 13 more people and injured 31 others. One final victim died in 2001 from the lingering effects of his wounds.

Cool story and definitely not the fuzzy nice aliens that some on this site seem to go on and on about almost religiously.

No idea why they would attack these men but to speculate.

It was a former military site that may have once attracted the entities interest, these men were digging and excavating which perhaps these entity's did not want them to do even though the site was no longer of interest - perhaps because of something they had put there when it was of interest in the past.

Something buried, something they did not want the human's to find, a buried craft or facility that even if destroyed may have then proven problematic for these entity's, they acted aggressively but it sound's like they still did not hurt anyone just equipment so this was a warning that they did not want them to dig there?.

Just my conjecture but while I doubt that anything would still be there if I was the US government - department responsible secret or not I would certainly still have some on the ground and very thorough investigation done even though time has past, and if they did not do so back then - well then someone in that department was not doing there job.


Of course it could have been an accident, insurance job gone wrong or a cover up of something else but I actually believe these guy's and doubt that, I believe it was what they said it was but then the question become's why?.

IF they are alien's then there motivation may not be an easy one to reverse calculate BUT if they are something else?.

posted on May, 1 2020 @ 11:02 AM
link
I too cannot recall hearing about this incident from so long ago. Definitely in the oldie but goody camp! My eyes perk up when I hear/read about beams of light from something in the sky. Thanks for bringing this to life again.