How Whisky Can Help To Heal COVID-19

posted on Apr, 26 2020 @ 09:24 AM
link
So when this first came out people where saying drink a hot toddy which consists of; 1 shot of whisky, a tablespoon of high quality honey, and a tablespoon of lemon juice or better yet the juice of half a fresh lemon. I have taken this at night in the past for other colds and flus with good success. But now a professor from Japan has a study of how inhaling whisky and hot water can help with respiratory issues at home.
It's a very interesting read and idea. See the full report below.

I have whisky on hand for strictly medicinal purposes I am not too fond of the taste even mixed with coke.

I won't even click the source link but I'll will try your recipe.

posted on Apr, 26 2020 @ 10:13 AM
link
The left is going to bash you for pushing Trump's idea of consuming disinfectants. Boozeis one of the best disinfectants they use. They started adding chemicals to alcohol so that people could not drink Isopropyl alcohol....because they tax liquor and cannot tax medicines. No cheap booze available. Booze is an excellent anticeptic, and moonshine does less damage when poured on a cut than Rubbing alcohol does. I studied that too and found good evidence to show that was true.

Other disinfectants that are used sometimes are iodine....it is found in our table salt...but I have not actually found any evidence yet to show iodine destroys this particular virus. Povidone-Iodine is effective, but that might not be the iodine that is doing it. Iodine does work for most infections, but there is not much research that i have found that shows megadoses of iodine will kill this.

Hydrogen peroxide does treat the coronavirus infection, but if you use it medically, you would have to use food grade H2O2 and they have been using this for over a century to treat pneumonia. But with the invention of antibiotics this became unnecessary to do anymore as most times the antibiotics target the microbe better most times.. It is not approved to be used on label anymore for treating internal infections, but in emergency situations it is allowable I think. Our body produces hydrogen peroxide when we fight infection most times, so it is usually not something that is needed. Even some of our gut bacteria produce it when they are under attack, it can be one of their weapons against other microbes.www.sciencedirect.com...

I think that the best disinfectant to use to fight this disease is Seagrams and Seven up. I think Trump was telling us it is ok to drink when we are stuck at home and are not supposed to drive. Now I am not saying you should go out and hoard all the booze, but having a good supply can sure help to cure any depression formed from the limitations on our driving around with all that cheap gas at the gas stations. I would love to go visit people up in my hometown when gas is so cheap, kind of depressing. We bought some disinfectant a couple of days ago, a case of good quality beer for fourteen dollars and 49 cents, I am going to follow Trump's recommendations and drink this disinfectant.

Trump never once said for people to drink bleach or Lysol, he said disinfectant....there are a lot of harmless disinfectants, even gargling with salt water has disinfectant properties. Baking soda and water is even a disinfectant. So is vinegar. Apple cider vinegar kills bacteria and fungus, but is not that effective against viruses.

I am not saying everyone should go out and get drunk every night, but I have learned over the years that a couple shots of brandy or a hot totti does get rid of viral infections. That hot totti is one of my essential meds, it needs the ginger brandy in it with the regular brandy though, or it does not work as good..

They've gone to town on that study ... proves a point.

Whiskey and coke though? Sacrilege

Yes!!! I saw this yesterday, and grinned from ear to ear! I swear by hot toddies and have for years, and now I finally know how and why hot toddies work. I'll bet there are even more benefits not yet studied and verified.


I have whisky on hand for strictly medicinal purposes I am not too fond of the taste even mixed with coke.


It's brandy in my house. Everyone knows that I always have brandy on hand, and that it is strictly for medicinal purposes. It has a similar alcohol volume to whiskey, but it has the added benefit of being highly antioxidant as well. I think because it's distilled? I'm not sure.

I also add good old apple cider vinegar to mine. And I like to stir them up with cinnamon sticks. But the honey and lemon part is the same.

Coke is for strippers. I like my Whiskey neat.

originally posted by: dashen
I mean if you get your blood alcohol level high enough it'll probably kill the virus

Ok fine I will be the test subject but only because of science. Just let me check my schedule for today.

Would ya look at that, it would seem as though I’m free.

I have whisky on hand for strictly medicinal purposes

Ah, a fellow man of culture.

It’s a bit of a Scottish/Irish old wife’s tale but I drink it when I get a cold or something. I don’t know if it actually helps but it does make me feel a little better. I doubt it’s a cure for Covid tho

It's noon and all I can say is your recipe is awesome. I can't drive now btw.

- Social distance made me alcoholic.

posted on Apr, 26 2020 @ 11:28 AM
link
Disruption of the Lipid Fat layer that protects the bacteria living inside the viral size capsule.

originally posted by: one4all
Disruption of the Lipid Fat layer that protects the LIVING PLEOMORPHIC bacteria existing inside the viral size capsule.

originally posted by: OtherSideOfTheCoin
It’s a bit of a Scottish/Irish old wife’s tale but I drink it when I get a cold or something. I don’t know if it actually helps but it does make me feel a little better. I doubt it’s a cure for Covid tho


I was treated in Mexico. 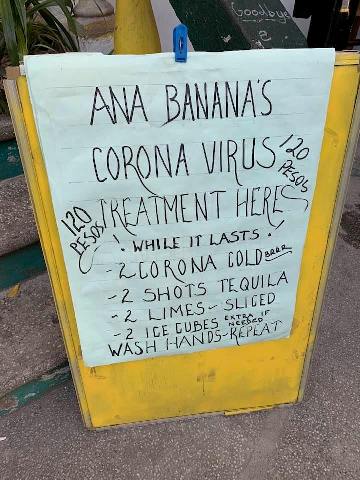