I'm watching it again for the third time. First watched when I was a kid when it was originally on the gogglebox.

Survivors is a 38 episode, three-series post-apocalyptic TV drama produced by the BBC between 1975 and 1977. Conceived by Terry Nation (one of the creative talents behind Doctor Who and the originator of the Blake’s 7 sci-fi drama) the series follows the travails and adventures of a group of British survivors who emerge unscathed from a deadly biological epidemic — unleashed by a laboratory accident which wipes out more than 99% of the world’s population — into a desolate and almost empty world. 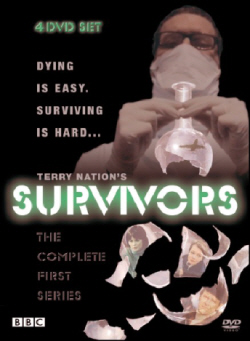 Survivors is a British post-apocalyptic fiction drama television series created by Terry Nation and produced by Terence Dudley at the BBC, that broadcast from 1975 to 1977. It concerns the plight of a group of people who have survived an apocalyptic plague pandemic, which was accidentally released by a Chinese scientist and quickly spread across the world via air travel. Referred to as "The Death", the plague kills approximately 4,999 out of every 5,000 human beings on the planet within a matter of weeks of being released.

I laughed at the bit in the first episode where a girl comes across a Welsh tramp living in a field who assures her "the yanks will sort it out, they always do".

Thanks for the reminder

I raise you Z for Zacharia.

The original TV version not the 'merican remake.